Mount Woodrow Wilson is a stately summit in Wyoming's rugged Wind River Range. Rising to 13,502 feet, it is the ninth highest peak in the state. Situated near the head of beautiful Titcomb Basin, it commands the attention of hikers for many miles. Despite being just 1.2 miles south of famous Gannett Peak, Wyoming's highpoint, Mount Woodrow Wilson is rarely climbed. Approaches require crossing crevassed glaciers and any ascent requires technical rock climbing and/or climbing on moderate snow and ice slopes.

Mount Woodrow Wilson was named after President Woodrow Wilson by the first ascent party (Albert Bessine, Edgar Doll & Carol Thompson-Jones) several months after his death in 1924. Rumor has it that they counted approximately 14 points on the ridges extending from the peak and associated them with the 14 points Wilson had outlined in 1918 as a basis for ending World War I.

Mount Woodrow Wilson can be climbed from Dinwoody Glacier or from Sphinx Glacier using one of the the following approaches, each of which take most parties two to three days to complete:

1. Titcomb Basin – Probably the easiest way of approaching Mount Woodrow Wilson. OK if you're planning on climbing the peak from Dinwoody Glacier and ideal if you're planning on accessing the peak from Sphinx Glacier. A camp in upper Titcomb Basin makes a great starting point for climbs of the South and West Couloirs. See the Pole Creek Trail/Seneca Lake Trail/Indian Pass Trail route description for details. 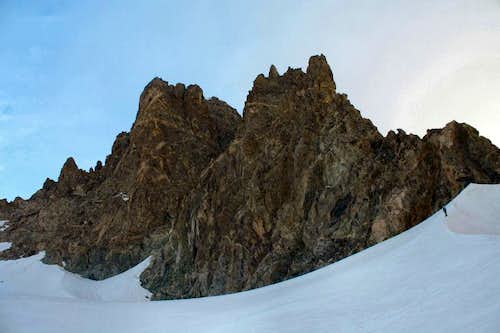 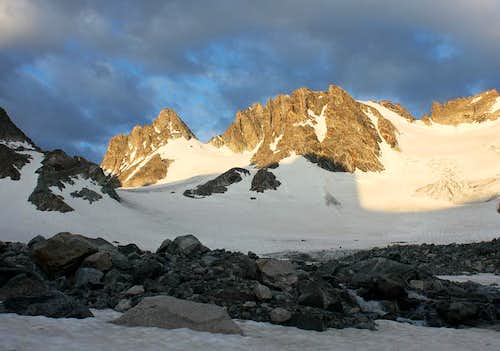 Kelsey lists six routes on Mount Woodrow Wilson. See his guidebook for terse descriptions of each.