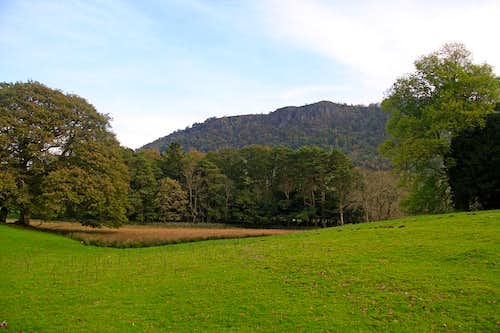 Walla Crag from the shores of Derwent Water
Walla Crag is a fairly small rocky peak near the popular tourist town of Keswick in the Northern Lake District. The peak is the northern most fell in an area known as the Central Fells and offers the walker superb views north over the Vale of Keswick to Skiddaw and also to nearby Derwent Water. A direct ascent from Keswick is not possible thanks to its precipitous craggy north-west face. Most ascents are done via Rakefoot to the north or Catgill to the west of which both routes are on well defined footpaths.

The fell is more often climbed by tourists, along with Catbells thanks to its close proximity to Keswick and its low height, allowing families and children to make a successful summit of the peak.

For a longer walk, you can continue to follow the Central Fells south to the higher summit of Bleaberry Fell (Amazing views north) and then onto High Seat (this is a very wet and boggy route) followed by a return via Ashness Bridge.

A Panorama from Walla Crag
Walla Crag is just a mile or so south east of Keswick with a large National Trust Car Park at Great Wood just off the B5289 (Borrowdale Road) south out of the town.

As the Lake District is on the North Western tip of England most visitors come from the south or east. If coming from the east the best route is to head up or down the A1(m) to Scotch Corner and then take the A66 west for about 80 miles, past Penrith and then onto Keswick. There are numerous car parks in Keswick for a food/tourist and many outdoor shops for new gear.

If coming from the south then either take the A1(m) route or the M6. The M6 starts in the midlands just south east of Birmingham. Take the M6 north and continue past Kendal and then up to Penrith where you need to take the A66 west to Keswick. 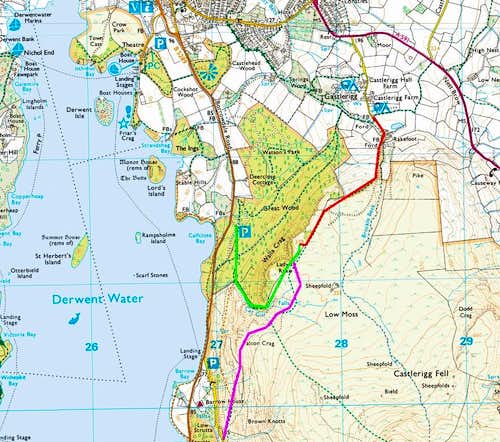 Routes up Walla Crag
Route 1 - Green Route
This is the most simple and shortest route up to Walla Crag - although it is not the easiest. From Great Wood Car Park just by the Borrowdale Road a path heads to the south that takes you to a bridge over CatGill. Do not cross the gill - instead take the path up to the left just before the stream which takes you up a zigzag constructed footpath to the top of the gill. From the top the path turns north along the wall to the summit which is on the other side of the wall.

Route 2 - Red Route
This starts at Rakefoot and follows the footbridge over Brockle Beck just as the road ends by Rakefoot. The path is well worn and runs parallel to the wall straight up to the summit of Walla Crag (which is on the other side of the wall).

Route 3 - Purple Route
This is a slightly less popular route to Walla Crag and starts off near Ashness Bridge. Ashness Bridge is a very famous spot offering a lovely view of this area of Lakeland. The route heads north off the road up to Falcon Crag and skirts round the top of Catgill to pick up the last section of path of Route 1. 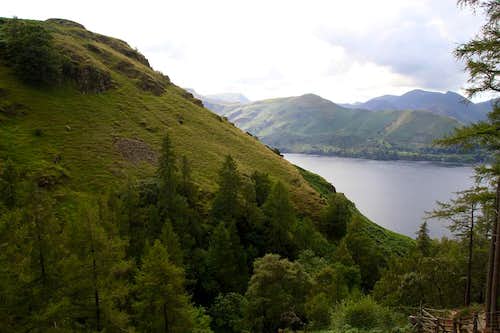 The top of Catgill
No Red Tape - Wall Crag can be climbed without any restrictions. 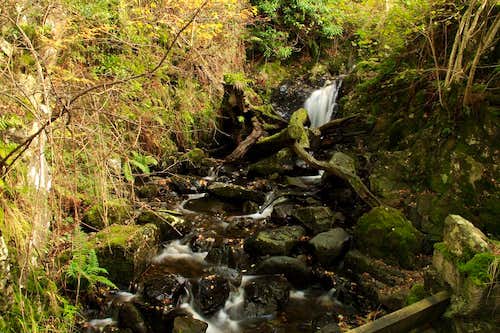 Catgill (The path is to the left of the main gill)
Walla Crag can be climbed all year round with no major issues. Care should be taken by the summit crags in winter or windy/wet weather as people have fallen in the past. 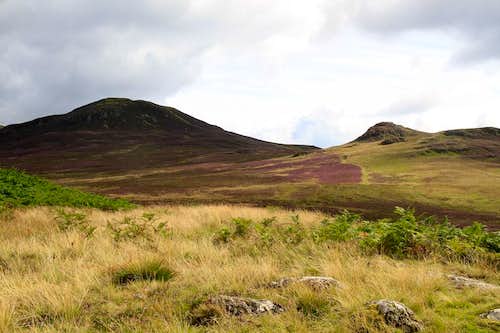 Bleaberry Fell from Walla Crag
There are two campsites at Rakefoot just to the north of Walla Crag and another just by the lakeshore in Keswick. Neither of the campsites are open during the winter months. 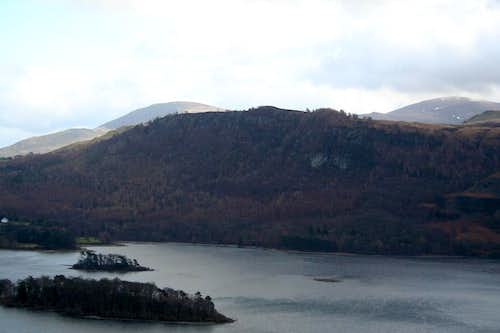 Walla Crag from Catbells
Information and photos on Walla Crag