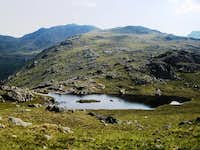 Allen Crags from the north
Allen Crags is a fell in the Borrowdale area in the Lake District. The summit is a broad plateau, with several cairns, but the highest one is obvious. On a clear day, the views all around are magnificent.

The summit forms the southern high point of a long, wide, undulating ridge. Just over 2km away to the north, the high point on the other end is Glaramara (783m). 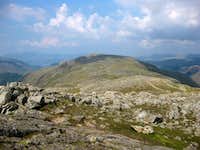 Glaramara from Allen Crags
Southwest of Allan Crags, about 300m from the summit, a saddle at 725m marks the end of the ridge. This gives the mountain a prominence of 60m.

A further 300m to the southwest lies the important mountain pass of Esk Hause (759m), the lowest point on the ridge between Great End (907m) to the west and Esk Pike (885m) to the southeast, and the gateway between Borrowdale and the Eskdale valley further south.

The nearest trailhead is Seathwaite Farm to the north. Other convenient trailheads are Wasdale Head to the west, and the Old Dungeon Ghyll Hotel in the Great Langdale valley to the east.

A visit to Allan Crags is often combined with other fells, especially with Glaramara.

From Keswick, bus 78 serves Rosthwaite and Seatoller. From Seatoller it's 2km to Seathwaite, from Rosthwaite 4km. Unfortunately, the first bus doesn't go very early and the last one isn't very late, so if you plan to do more than Glaramara and Allan Crags, you'll have to be fast or spend more than a day in the area. 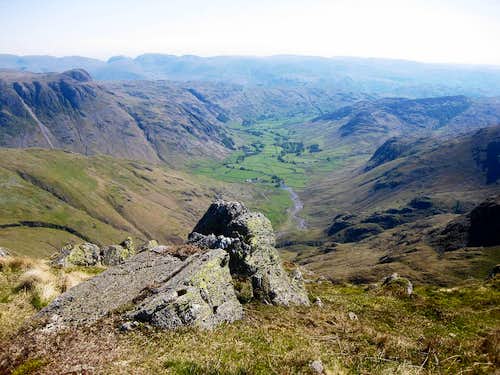 From Ambleside, one of the main villages in the east of the Lake District, follow the A953 to Skelwith Bridge, then the B5343 to Great Langdale and Old Dungeon Ghyll.

Bus 516 from Ambleside services Old Dungeon Ghyll. Coming from further afield, there is a train station at Windermere, and several bus lines between Windermere and Ambleside.

The Wasdale Head trailhead lies east of Scafell Pike, at the end of the small local road past Wast Water.

Public transport in this area is limited. The Wasdale Taxi Bus operates line 13 to Wasdale Head, but infrequently.

The main routes (see the original for a much bigger version)
There are two popular routes to the summit (and several others).

Although the Lake District is a National Park, there is no red tape.

The ridge is wide, and if you have poor orientation skills and visibility is poor you can get lost. On a good day, there will be a few other hikers. With snow cover or in poor weather, it's a different matter. And this area sees a lot of precipitation! 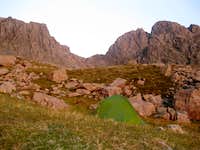 Camping wild, not far from Wasdale Head
The Lake District gets a lot of visitors and there are many places to stay, in all price ranges. There are camp sites at each of the trailheads. Officially, camping wild is not allowed in England, but unofficially, in uninhabited areas it is. Don't camp too close to the trails and stay well away from houses and cultivated lands and you're fine.

There is a hotel at Old Dungeon Ghyll.