Walville Peak is a mountain located in Pacific County, Washington. Although the peak is a relatively low elevation and is not the highest point in the county, it is still important to many peakbaggers.

As previously mentioned, the summit is reached via logging roads. However, a gate might prevent drivable public access to the summit. Regardless, public access is allowed on weekends during daylight hours. The non-motorized (hiking, snowshoeing, biking) trek is only approximately 1.5 miles one-way from a Borrow Pit located on the ridgeline west of the summit, following a straightforward ridgetop walk along forest roads. 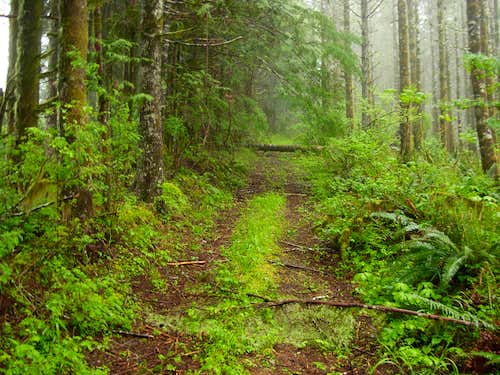 A fire lookout site used to be at the summit of Walville Peak. Little information has been found regarding the specifics outside of various old "Walville lookout station" references. All that remains of the original fire lookout are a few wooden planks from a past structure found at the summit around the mountain's USGS Benchmark. However, multiple resources refer to a lookout in the area known as "Squally Jim" Lookout. "Squally Jim" is a hill located approximately 1.5 miles west of Walville Peak. According to historical documents, the original "Squally Jim" fire lookout was built by the Washington State Division of Forestry in 1942, an 83' tall structure with a 7'x7' cabin and AWS "Smokehouse" living quarters for the lookout operators. In 1955, a 40' tall wooden live-in lookout was built at the summit, and the 83' tall tower was torned down the following year. In 1962, the live-in fire lookout was destroyed by the "Columbus Day Hurricane", and the lookout was replaced within a few weeks. Then the fire lookout was officially decommissioned and destroyed by the Department of Natural Resources in 1968.

Old artifacts can be found at both locations, on Walville Peak and at Squally Jim. It is possible that historical references might be intertwining between the two sites, with some of the structures referenced being at one location while other structures referenced being at the other location. In example, a "cupola lookout" referenced by a USGS party during 1952 was the same year the USGS "Squally Jim" BM was put atop Squally Jim (hill). Similarly, the USGS "Walville" BM was put atop Walville Peak sometime during 1953-55, during a similar timeframe that a wooden timber tower was built in the area.

It is quite possible that historical references to "Squally Jim" and "Walville" lookout structures might be involving both sites, or possibly one site. And if current information only references one site, then it is entirely likely that some other structural information has still not been found by the masses. Regardless, this is an are rich in lookout history. 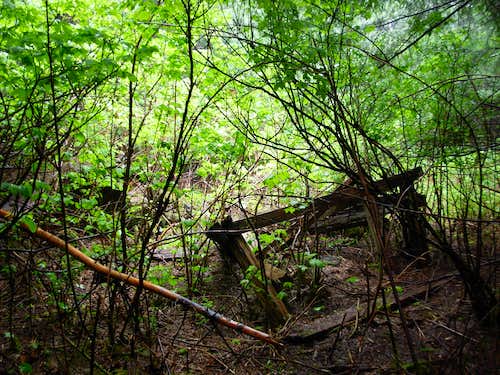 Remnants Of Old Fire Lookout At Summit
Walville Peak is named after the nearby logging community of Walville. The name "Walville" is actually derived from two separate names. At the turn of the 20th Century, the "Walworth & Neville" timber company dominated the logging industry in the area. "Walville" was the nickname given to the community in 1903, by attaching the first syllable of Walworth and the last syllable of Neville to form the new name.

1) From I-5, take Exit 77. Turn west to follow Highway 6.
2) After 17.6 miles, turn right (north) onto Stevens Road, towards the community of Doty, Washington.
3) After 0.4 miles, turn left (west) onto Elk Creek Road.
4) After 3.1 miles, the county-maintained road ends and Weyerhauser (logging company) property and roads begin. The main road, which becomes known as Forest Road #8000, continues left (straight), and is a gravel road. 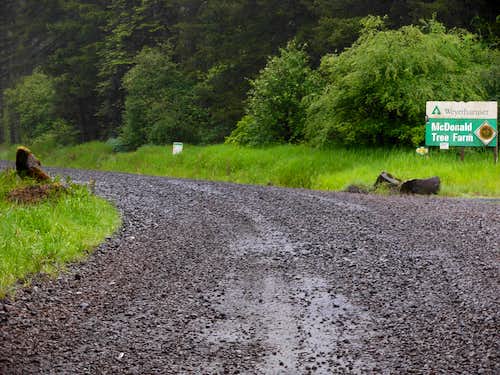 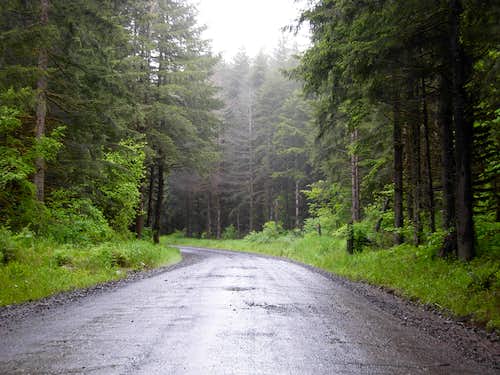 Driving Along Forest Road #8000
6) After 1.0 mile further, a gate is encountered. If the gate is open, proceed. If the gate is closed, park on the side of the road, where enough space is available, and proceed to hike, snowshoe, or bike from that point.
Beyond the gate are several options:
OPTION #1: After 0.6 miles from the gate, at ~1900' elevation, an old single-lane logging road spurs from left (straight) from Forest Road #8400. This would save approximately 0.3 miles of hiking each way from the parking area of OPTION #2 (see below). However, parking spaces and turnaround spots are extremely limited.
OPTION #2: After 1.0 mile from the gate, at ~1850' elevation, a Borrow Pit is located on the left (east) side of the road. Park at the Borrow Pit, making certain not to block any possible machinery operations.
-> Hiking directions (see below) will begin from this location. 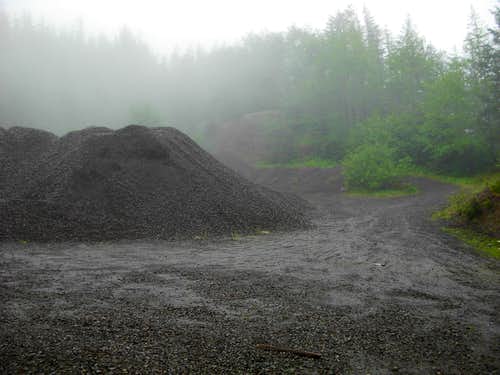 Borrow Pit (~1850')
OPTION #3: Continue following the logging road beyond the Borrow Pit, then heading east along the upper south slopes of the mountain, until reaching the summit road. However, as of Spring 2010, a washout prevents access along this road system.

1) From the Borrow Pit at ~1850' elevation, hike on an old logging road angling above and east of the area. The initial slope beyond the Borrow Pit is briefly steep, but then becomes more gradual once the ridgetop is reached. The old (occasionally overgrown) logging road soon traverses over a minor bump (2067') shown on maps as "Squally Jim". 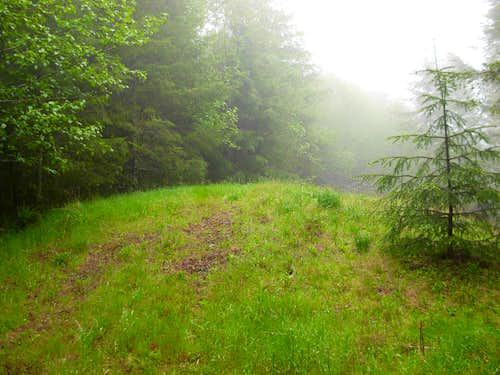 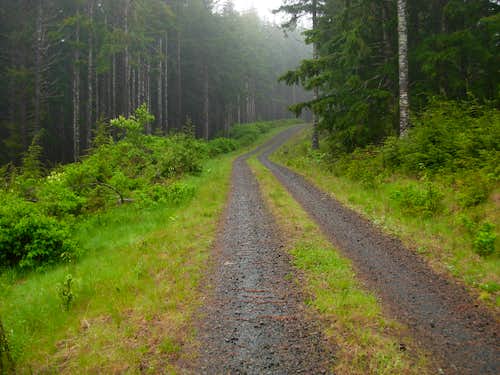 Final Road To Summit
6) There are some old remnants of an uncompleted communications tower in an open area located approximately a dozen yards from the true summit (2417'). The true summit is located in the forest immediately east of the communications tower area. The true summit is represented by a few wooden remnants of "Squally Jim Lookout", with a USGS Benchmark located underneath the lookout debris.
HIKING DISTANCE, STARTING AT BORROW PIT: 3.0 miles roundtrip. 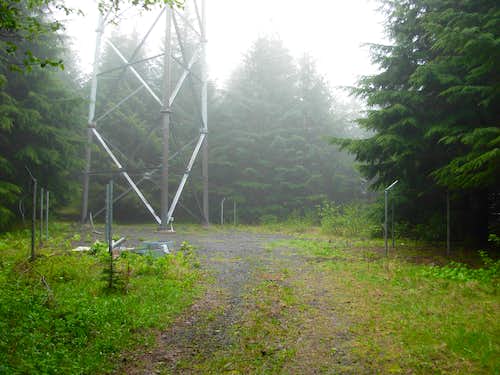 Active logging operations are present throughout the slopes of Walville Peak. However, public access is granted. There are several general rules:
1) If planning to reach the summit of Walville Peak, public access to some of the roads used on the summit route is only open during weekends, while logging activity is at a minimum (if at all present).
2) Access is only allowed during daylight hours.
3) If any logging machinery, vehicles, and/or personnel are encountered while travelling the Walville Peak logging roads, they reserve the "right of way". Unfortunately, because many of the logging roads on the mountain are single-lane, if there is no place to immediately pullout a vehicle on the side of a logging road when logging operations need to pass by, that vehicle will need to back-up to the nearest pullout or side road so that the logging operations' "right of way" is maintained.

Due to the vast amount of logging activity that takes place on the mountain slopes, Walville Peak has multiple logging roads present. Some of these roads may or may not show on current topography maps. It is possible that other summit approach routes exist, even if not clearly evident.

Because Walville Peak is the site of active logging operations, no camping is allowed on the mountain. However, official campsites are available at nearby Rainbow Falls State Park. The park has 45 campsites, including three spaces designated for hikers only. The campground area is fee-based, and campsites area available on a "first come first served" basis.