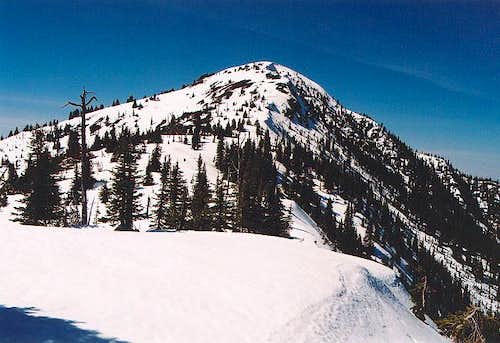 Abercrombie Mtn, the highest peak in Stevens County and misses being the highest peak in all of northeastern washington by about twelve  feet (see Paul Klenkes remarks). The highest honor goes to Gypsy Peak in neighboring Pend Oreille county. This mountain is not a climber's dream as it has a trail to the very top where a lookout once stood but it is important due to its prominence and the fact that it is the highest point of land in Stevens County. The views from the summit are expansive in all directions and another interesting aspect is the fact that grizzly bear and caribou inhabit the surrounding area. The author of this report can attest to the fact that grizzly bears are in the area, trust me on this.

This mainly deals with the most commonly used way to get to Abercrombie Mountain. See the Flume Trail route for the Metaline Falls approach. Otherwise, take US Highway 395 into Colville and watch for the turnoff to State highway 20 in the middle of town (3rd Avenuue) Turn right at the stoplight and follow this road to Aladdin Road prior to reaching the airport. Turn north on Aladdin road and head for Leadpoint, 33 miles away. Leadpoint is not much more than a wide spot in the road and consists of a few homes several miles beyond Deep Lake on road 9445. In Leadport, turn right onto the signed Silver Creek road , #4720
and it will soon turn into FS road 7078 at 1.5 miles. Soon after the National Forest border (you'll cross a cattle guard), bear left uphill at fork staying on #7078. Turn right (east) on road #300 (6.2 miles). Continue to small trailhead at end of road #300 (9.8 miles). Road #300 is single lane and has a few ruts and bumps but is passable by passenger car (barely) although a higher clearance vehicle is preferable. You'll reach a small TH, large enough for just a few vehicle. FS trail 117 begins from here. Your first real view of Abercrombie Mountain is found in the early going of road #300.

Trail 119 from the Silver Creek TH will hook into trail 117 but adds additional mileage and elevation. The flume trail from the east side is also a possibility, #502 but I've listed the one trail I've had experience with and will describe all three trails in more detail later on.

Additional information can be obtained from either the topographic map USGS Abercrombie Mtn. or the Washington Road atlas put out by DeLorme ( p119/A5. S35-T40N-R42E).


When To Climb and Trail Information

A climb? No. A walkup? Yes. Noting difficult here but yet still worth the effort to gain one of the premium view platforms in this part of the state. A clear day is a must and thunderstorms are to be avoided on this peak.

The best time of year to visit this peak would be from late May through October. Road conditions might vary so it would be wise to check with the Colville Forest service office.

This picture shows what the weather can look like on top on a late September day Here are some summiters enjoying the weather (well sort of) in this photo, taken by rfbolton

Trail #117 is t he most common approach utilized to summit the peak. (see routes)

Flume Creek Trail #502
This trail's TH is reached by following FS road 350, which branches off north from the Boundary Dam Road, northwest of Metaline Falls. This road is reported to be rough and slow going for most of the e 7.5 miles it takes to reach the TH. The Flume Creek trail takes 4 miles to reach the summit and it is very obvious on the Topozone map.

When you get to the summit, you'll find yourself in the midst of the large talus rocks everywhere. Some have been piled into cairns that if weren't artificial, would make Abercrombie taller than Gypsy Peak, which wins the highest peak in Eastern Washington honor by only one foot.

From the summit this is what you see:
Easterly: A great view of the Pend Oreille river valley and the Selkirk Mountain range, including Gypsy Peak (if you know where to look)

Looking Northwest you can see the ski runs of Red Mountain (in Canada) ski area and below it the town of Rossland.

To the northeast, you are only a couple of miles from Hooknose Mountain, 7210 feet, available via a ridge that connects the two.
You could add Hooknose Mtn to your agenda if you are interested.

On the summit you'll find remnants of an old fire lookout that used to be there.

There are no formal campgrounds or even primitive campsites developed by the USFS in this area but one could find adequate areas to camp in the vacinity. Watch for areas that would be suitable as you drive the road. I found one spot that had been used for a campsite at the TH near where I parked my vehicle.

Should you decide to camp in the area, use common sense in the handling of your food. This is bear country and it is important that they don't associate humans with easy food access. Hang your food and practice LNT camping. (my kids felt that I was over preachy at times too)

The area receives more precipitation than other portions of Eastern Washington and averaging about 28 inches of precipitation annually.
Half of this amount comes in the form of snow which generally begins to fall in late October and continues well into March and even April.


Grizzly Bears, Caribou and other critters

One of the things that makes this part of Washington state interesting is the Grizzly bear population that is up here. The proximity to Canada allows the bears to move back and forth How many Grizzly bears are known to be in this part of the state? One report, reported in a Missoula Montana paper a few years back, stated about 25 may be in the area of NE Washington / Idaho. That may have changed but I mention it just to give you an idea of the possibility of meeting a Grizz. While not a large population, the very nature of this part of the state may make it difficult to know for sure how many animals are in the area at one specific time. Here is an interesting article I came across about the desire of Canada to increase the numbers across the border in Washington. I have seen many black bears in the woods and have seen their tracks for years (along with cougars) but I have never encountered a grizzly up close and personal. The closest I have come occurred very near the summit of Abercrombie Mtn. (see my summit log report).

Caribou in the United States? Nah. That would have been my normal response, as I've figured that caribou are only found in northern Canada and Alaska. Well, they are here. Here are two articles that I found very interesting. ONE TWO

As you can see, northeastern washington is not blessed with huge towering mountains of the North Cascade variety, but it more than makes up for this in my opinion due to the unusual animal population of the area. Moose are also found in this area but I'll leave that discussion for another time.

Update of a grizzly incident: This past July, a friend and his wife were descending down from the summit of Abercrombie when his wife found herself ahead of her husband by a fair bit. As she rounded a curve in the trail, she noticed something big and brownish sitting down in the trail about a 100 yards away. It was a
grizzly. She hastily retreated to link back up with her husband and when they returned to that part of the trail, the grizzly had left. Needless to say, they are there, just keep your eyes open and try not
to go solo as I did.

Since the time/temperature weather link (below) is often down alot lately, click HERE to get Colville's weather report, Colville is the nearest town of any size.

Abercrombie one of 57 USA prominence peaks.

I won't try and explain the concept of Prominence but it is worthy to note that Abercrombie is one of the 5K prominence peaks in the state of Washington. Aaron Maizlish has put together this fantastic map of the Western United States showing the peaks that qualify for this special rating. More information on prominence can be found at
this site, peaklist .org Check out all the maps they have put together,
it'll keep you busy on a rainy weekend.

Here is a little bit of information about Stevens County. More will be added as it is discovered.

It is named for the first governor of Washington Territory, Isaac Stevens. As of 2000, the population was 40,066. The county seat is at Colville, which is also the county's largest city. Stevens County was created on January 20, 1863.

Actually, apparently (according to Roper, who has the hardcopy USGS map) there is a 7320+ contour at the summit of Gypsy Peak. It cannot be seen in Topozone because it is hiding beneath the section line locator mark. The contour in question is possibly the little brown streak in the top-right quadrant of the red plus sign here. The 7309 elevation value is dubious in that, as I recall, the BM was a few feet below the highest summit rocks.

Therefore, Abercrombie is at least 12 feet lower than Gypsy.

I took road 300 today (2 Jul 2005) and it would have been tough in a passenger car. There are quite a few spots that I think I might have bottomed-out in, if that's what I had been driving. The road is 99% dry, just a few shallow mudholes to contend with. Ample parking at the trailhead.

There's a rather nice (i.e. quiet, uncrowded) campground at the end of Silver Creek road. I stopped by on 2 July 2005 ... 4th of July weekend, and it was at most half full! The only obvious facilities consisted of a single pit toilet at the trail #119 TH.

Drove up Flume Creek road on 7/2/05. While the road is quite rough, the real problem lies with the heavy brush along the road. some portions of the roadway are less than 5 feet wide given the overgrowth. Much worse than I experienced in 2003. My hopes are the road is due for a brushing. This is a great trail to take if scrambling to nearby Hooknose. We left the trail heading for a saddle between Abercrombie and Hooknose making the trip to Eastern Washington's third highest peak much shorter. Look for a lovely spring with a pool near the final major switchback on the trail.

We've ridden Abercrombie twice, once in summer 2011 and again in summer 2012. In 2011 the trail was clear but in 2012 we ran into a lot of blowdown on the North Fork Silver Creek trail, and we would like to avoid a repeat. The Ranger station in Colville doesn't have an update which likely means their trail crew hasn't been up that way this year. I've seen a Oct. 2013 trail report on another site that there was some blowdown that late in the season, but wondering how bad winter 2013/14 was for blowdown. Thanks for any updates.