The Wasatch Range rises high above the most populated areas of Utah, going from near the Idaho border south to Nephi. They are accepted by many to be the closest range of it's caliber to a highly populated area. With many peaks rising above 11,000 feet, they tower over the valley floor (About 7000 feet!) This is a list of the Wasatch 11,000 foot peaks. All these peaks have their own uniqueness, and challanges. Certainly worth summitting them all. Included are only those with 200 feet of prominance.

In trying to make this list as complete as possible, I may have made it 'overly complete'. Ranked peaks have >300 feet of prominance. Any prominence figure with a '~' in front of it is my estimate based on topographical maps. If you have a proper figure on any of these, please let me know.

USGS quadrangles listed are the quads for the summits, not necessarily the routes. Consult the route page for your chosen route for quads containing it.

The tri-canyon area of the Wasatch is the area surrounding Big and Little Cottonwood and Millcreek canyons. It basically extends from Parley's Canyon to the north to Dry Creek in the South, separating Box Elder from the area. This Area contains most of the highest and most rugged Wasatch peaks.

The peaks along this ridge are mostly 2-3 class scrambles, with very little technical climbing offered on the peaks themselves due to the broken quartzite. 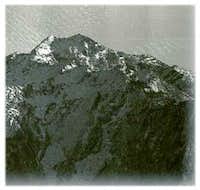 Although also easily viewed from the southern portions of the Salt Lake Valley, it is often overlooked (or ignored) by those who don't know what they are looking at. It is not climbed as often as it's neighbor to the west, though it shares most of the standard approach with it. Though on most topo maps it is labeled O'Sullivan Peak, locals refer to it as Sunrise (it is labeled sunrise on the Wasatch Mountain Club map). I don't know where this inconsistency came from. 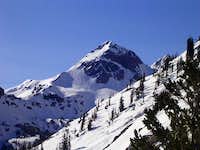 Dromedary Peak from Mill B south. Photo by PellucidWombat

This peak is not easily visible from the valley, though it can be seen from Little Cottonwood road. It doesn't get much heed from non-climbers at all, overshadowed by both Sunrise and the Broads Fork Twins. It's standard approaches are from Broads Fork or from Mill B South Fork. It is also popular to climb this peak via Tanners Gulch in the Spring, and continue on to Sunrise and the BF twins. 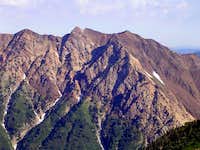 Although Mount Superior doesn't have enough prominence to count as it's own peak, it's included as a bundle with Monte Cristo here because one rarely climbs one without the other. It is only 1/4 mile between the two peaks, making bagging both of them worth it no matter what direction you're coming from. My suggested route would be Cardiff Pass from Alta, though it might be fun to descend into Mill B south and turn it into a loop (requiring a car shuttle).

There are a few more un-named 11ers on the ridge just west of Monte Cristo, though at most they only have ~160 feet of prominence. This seems to be about the same as (maybe more than) Superior, and they seem like more interesting (difficult) scrambles. So if counting Superior, one might want to make the effort to bag these at some point as well. One marks the southern extent of the Sundial Ridge, and the other is between that and Monte Cristo.

The eastern portions of this ridge are also stacks of broken quartzite, but about halfway across it turns to granite. Though also mostly broken on top, it offers more sheer cliffs and climbable rock. 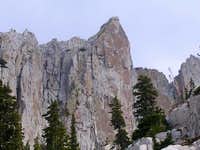 Lone Peak summit wall from the Cirque. Photo by aiadvisors.

Everyone (at least from my part) in the Salt Lake Valley and into Utah County knows about Lone Peak. A true Monarch of the Wasatch, it deserves all the attention it gets. With several standard routes, ranging from Alpine to Jacob's Ladder and Draper Ridge, to the Cherry Canyon Logging trail, they are all difficult, requiring steep hiking with lots of elevation gain, and class 3 scrambling at the end. The 600 foot summit wall and other large granite walls surrounding the cirque offer some of the best technical rock climbing to be found in the Wasatch. 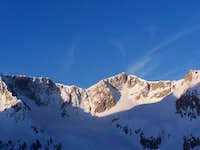 Relatively obscure, this mountain commands respect from those that choose to climb it. The easiest route may be from Lake Hardy, which still requires some easy scrambling and a long approach. Other routes include Bells Canyon, and the Beatout hike. 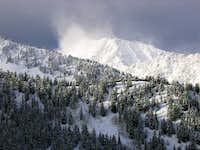 Easily visble from much of the southern Salt Lake valley, it get climbed very rarely. It's flanks go all the way down to the bottom of Little Cottonwood (including the popular Pentapitch climbing area). It can be climbed via coalpit gulch, bells canyon, or a class 4 traverse from South Thunder. The Wasatch Climbing guide mentions a few technical climbs up the east face from Hogum fork. 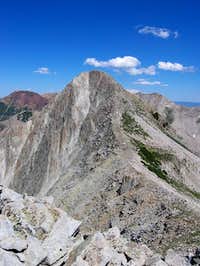 Pfeifferhorn from unnamed peak el. 11,137 ft.) to the west. Photo by Joseph Bullough

Another well known peak on the ridge that also deserves it's fame, as well as the hoards of climbers that flock to it. With the standard route being a class 2-3 starting from Red Pine, it has many many other options for climbing it. The North Ridge is a popular, more technical route. Other routes include from Maybird Gulch and from Dry Creek. It is also done in the winter and spring by many, though it is by no means as easy as in the summer. 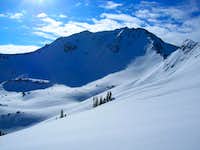 More obscure, yet only 5 feet shorter than the Pfeifferhorn, this has some good things going for it. It can be accessed from either Red or White Pine canyons, and offers some good scrambling. Easiest route is class 3, and the Wasatch Climbing guide mentions a few technical climbs with reportedly good rock.

Red Baldy from the East. Photo by PellucidWombat.

Red Baldy is even lower and more obscure than White. It is most often climbed as part of the Bullion Divide route. Easiest route is class 3. At this point the ridge has become quartzite, so technical climbing is not likely. 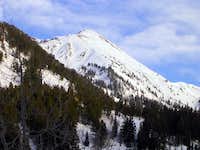 Red top from the White Pine. Photo by PellucidWombat.

This peak isn't prominent enough to count. It looks big from the west, but it is a nothing from the east. Why am I including it? Simply because (if in the area) it is worth getting on top of for the view of the alpine ridge to the west. Why not get this view from the American Fork twins? Because Red Top is in the way. I suppose it is getting attention by being a nuisance (much like humans).

AF Twins from the summit of Sugarloaf Mountain. Photo by Marauders.

The west twin of the American Fork Twins is the highest point of the Alpine Ridge, The Tri-Canyon Area, and Salt Lake County. There are several routes up ranging from walk-ups, to a (very fun) class 3 scramble, to snow couliors on the north face. 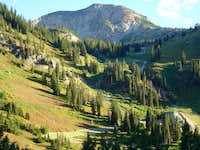 Mt. Baldy from the north. Photo by jvemery.

At this point the ridge gets easier to travel and the summits rounder. No scrambling is required to summit this peak. Often climbed as part of the Bullion Divide route. 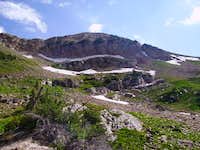 This is the lowest of the tri-canyon 11'ers, and also considered the easiest. This is due to the height of the trailhead, requiring much less elevation gain. This was the first peak I did when I made the transition from cragger to peak bagger, and it didn't dissapoint. I have made it from car to summit in 45 minutes.

This includes the mountains of Utah County. Overall, the mountains are not as rugged as in the central Wasatch, but there are two much higher peaks. 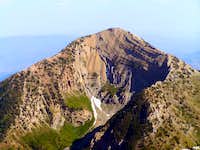 This peak is lower than all surrounding 11'ers, but since it is off the ridge, it offers great views of the ridge and elsewhere. The standard routes are walk-ups with a good amount of elevation gain. 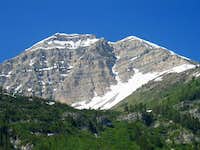 North Timpanogos is easily mistaken for the true summit of the Timpanogos massif from the southern Salt Lake Valley (I've had my share of correcting people). It is not climbed nearly as often as Timpanogos, and is considered more difficult because there is no trail. It requires route finding on class 2 ridges, or an ascent of a snow coulior.

East face of Mount Timpanogos. Photo by Jack B.

Mount Timpanogos is arguably the most recognizable peak in the Wasatch. It's huge towering massif dominates the skyline for most of the Utah valley and can be seen from much farther. For climbers and non-climbers alike it is a very inspiring site, and many people attempt it's summit each year. Main routes are walk-ups but long and steep. "The Timpooneke Trail is 7.03 miles long one-way, while the Aspen Grove Trail is 6.82 miles long one-way" (courtesy Phil Lowry, resident expert on Timpanogos).

Added by Scott Patterson: "By 200' prominence, there are actually several summits of Timp that qualify". - I suppose if interested in bagging all 11'ers, just traverse the whole ridge to be safe :)

Provo peak looms over the Orem - Provo - Springville area, but it greatly overshadowed by Timpanogos and Nebo. The standard routes are walk-ups, but there are no maintained trails. East peak is a little over a half mile to the east, and has (by my calculation) about 520 feet of prominence, plenty to make it a separate peak. 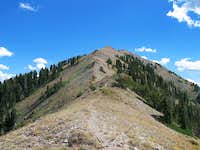 North peak is the peak just north of Mount Nebo. It is rarely done on it's own, but it is well worth the effort when doing nebo. 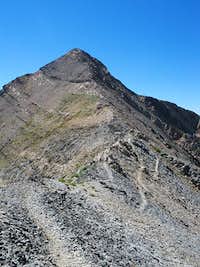 Mount Nebo from the North. Photo by Dean.

The southern most of the high Wasatch peaks ends with a bang. The highpoint of Utah County and the Wasatch range, this peak tops out just under 12,000 feet. As with many ranges the highest peak is also one of the easier ones. It is mainly gentle terrain and standard routes are walk-ups. This peak is also very popular in the winter. The south peak is reportedly prominent enough to count as well.

The following guidebooks can be helpful in climbing these peaks.

It can be purchased at the University of Utah Press

Also, Hiking the Wasatch is helpful for these and other peaks in the tri-canyon area.

If you have climbed all the peaks (rated or all), feel free to let me know and I will add you in this section. Feel free to include any information you want to put here (first 11er, last 11er, Date of completion, age at time of completion, age of first climb, favorite peak/route, the type of sandwich you ate on Lone Peak, etc.)


Name: Golden Harper
Age at completion: 31
First 11er: Timpanogos (Ran up at age 9 and many times since)
Last 11er: North Timp
Date of Completion: 9/20/13
Favorite Peak/Route: Toss up between Lone Peak & Pfeifferhorn
Of note also is that I designed a couple of trail running shoes for ALTRA Footwear named after peaks in the Wasatch, namely The Lone Peak and The Superior. I ran in Altra Lone Peak shoes to the top of every summit and most of the summits were all done in 1 pair.