Provo Peak sits in the shadows of the two giants of Utah County, Mount Nebo and Timpanogos, but at 11,068 feet is still one of the highest peaks in the Wasatch. There are no well-maintained trails to the summit, but has several routes that are steep, but not particularly difficult, while there are more challenging route available. Although the peak is climbed fairly frequently, when in comparison to other mountains in the area, the peak sees relatively few ascents, especially given it's proximity to the Provo/Orem area. Perhaps the lack of an official trail and the rough access on the road are the main reasons for its lack of popularity among hikers and climbers.


The peak is fairly symmetrical and visible throughout many locations of the Utah Valley, but when you are close to the east side of the peak, it is mostly hidden by other mountains.

The west side of the mountain is the most gentle, but it is still rather steep and precipitous, even if it isn't that rugged. The east and north sides of the mountain are fairly rugged and that's where the more challenging routes lie. Th south ridge isn't rugged, but it is very long.

Most of Provo Peak is made of limestone, but with layers of quartzite as well. This is the Oquirrh formation, which forms the bulk of the rocks on the mountains on the east side of Utah Valley, as well as most of the Oquirrh Mountains. 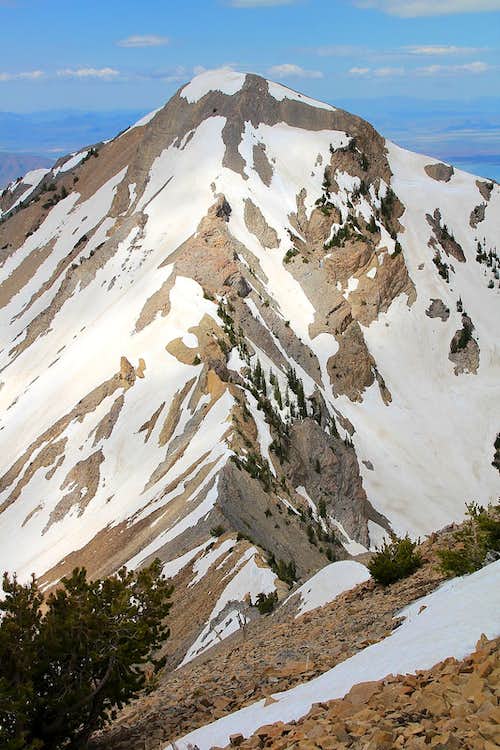 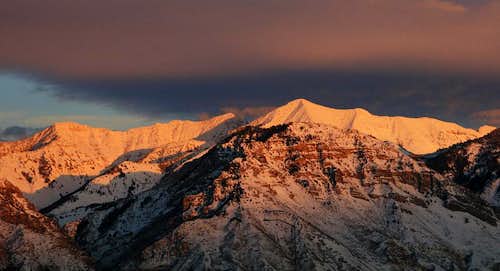 Provo Peak from Provo itself.

The best and quickest way to climb Provo Peak is to get on the Squaw Peak Road. A high clearance vehicle is necessary (the first time I attempted Provo Peak, my dad wrecked the car on this road!).

Parking along this narrow road can be problematic, try to park in a way not block the road too much.

From I-15, take exit 275 to Highway 52, and then Highway 189 to Provo Canyon. Continue east at a split towards Bridal Veil Falls up Provo Canyon. Less than two miles past the mouth of the Provo and just past mile marker 9 is a sharp turn to the right which is the Squaw Peak Road. It is paved for several miles (and some great views), then a rather rough dirt to the Rock Canyon Campground, and the West Ridge of Provo Peak.

The Trailhead is about 13.5 miles up the Squaw Peak Road, but plan on about 45 minutes to drive it. The last four miles or so is rough and driving is slow. 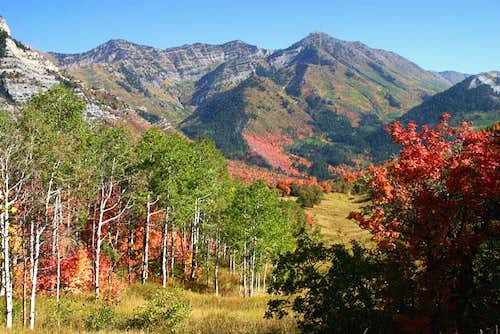 Provo Peak from the northwest. If you know where to look, you can see the trailhead near center right of the photo.

The West Ridge is the most popular route on the mountain. It is short, but very steep, at least for a path. A climbers trail reaches the summit from this route.

The route has 2700 feet elevation gain over 1.5 miles. See the route page for more details. 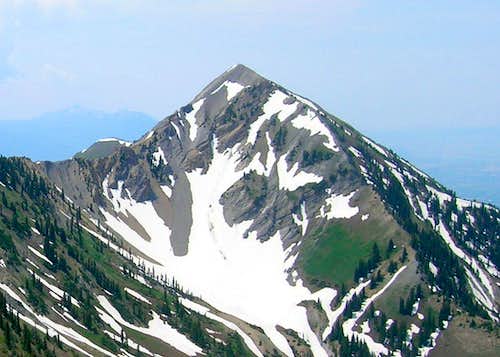 The west ridge of Provo Peak forms the right hand skyline of the photo.

The north side is very rugged and contains several steep snow routes. Most would not be pleasant once the snow melts. 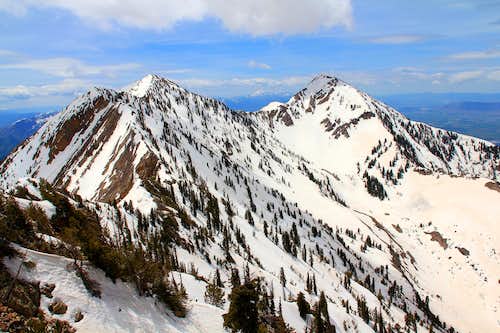 The north side of Provo Peak (right).

This is a rugged route, almost always used in combination with East Provo Peak. The ridge between the two peaks is class 3 and quite rugged in places. 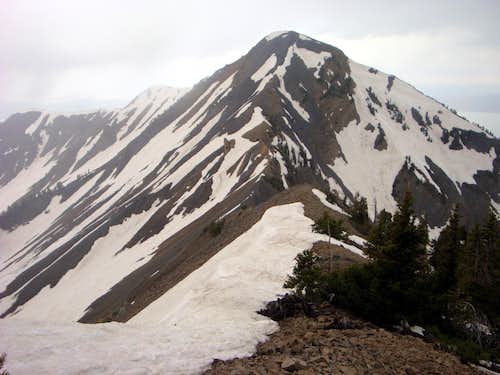 The South Ridge is walkable all the way from Camel Pass to Provo Peak. The route is pretty easy, but it is long. 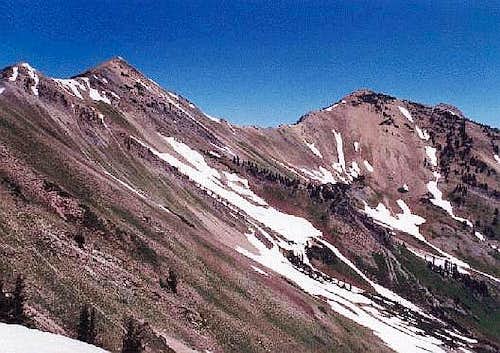 The Southeast Face of Provo Peak looks like an interesting climb, but I haven't done it. There is lots of private land in the Hobble Creek area as well, so access may be an issue.

If you don't want to drive the Squaw Peak Road, or if the road is closed for the season, you can climb Provo Peak from the valley floor.

Good trails are present in Rock Canyon, Slide Canyon, and Slate Creek. Most people would need 1.5 days to climb Provo Peak via any of these routes.

No permits or fees are required, so please take care of the area. 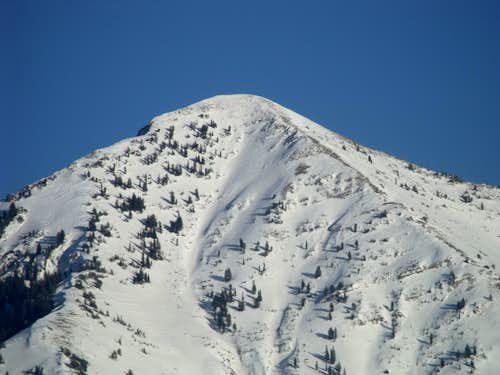 Please take care of Provo Peak! This is the gentler west side.

This is the most popular time to climb the mountain. The West Ridge route is either mostly snow free or snow free.

Early Fall is very colorful on the lower slopes of the mountain. 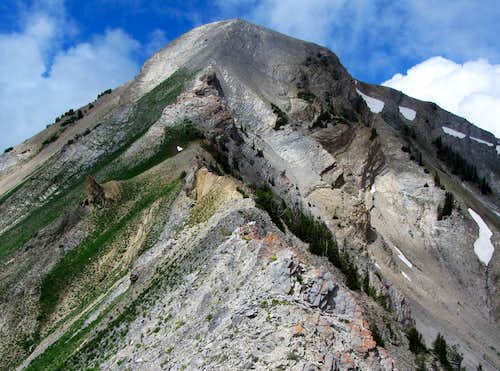 The East Ridge in Mid-July.

October and early November bring variable conditions to the mountain. Expect anything from summer to winter conditions. 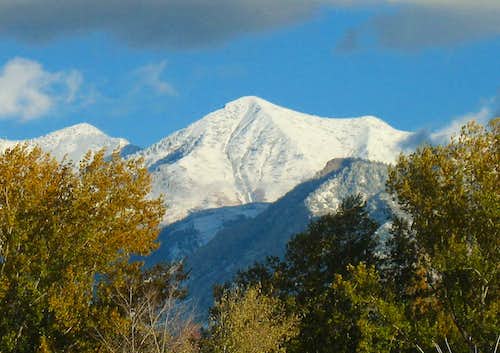 Provo Peak as seen from the valley floor in October.

In winter and early spring, Provo Peak is one of the safest of the 11,000+ foot peaks in the Wasatch, at least from the West Ridge, but it isn't easy.

The Squaw Peak Road is closed in winter, so a winter ascent (unless a snowmobile is used) has to be done from the valley floor. Rock Canyon is probably the most practical access route in winter, but Slide Canyon and Slate Canyon can be used as well.

In winter, most people would need a day and a half to two days to climb the peak. 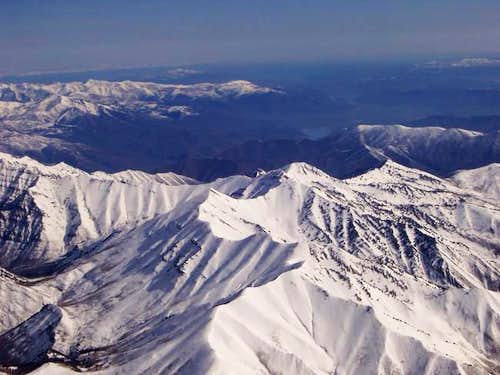 The West Ridge route melts off earlier than most other routes of this elevation in the Wasatch, but the north side of Provo Peak has some good snow routes. On the west ridge, bring an ice axe before late June. The north side usually holds snow through most of July. 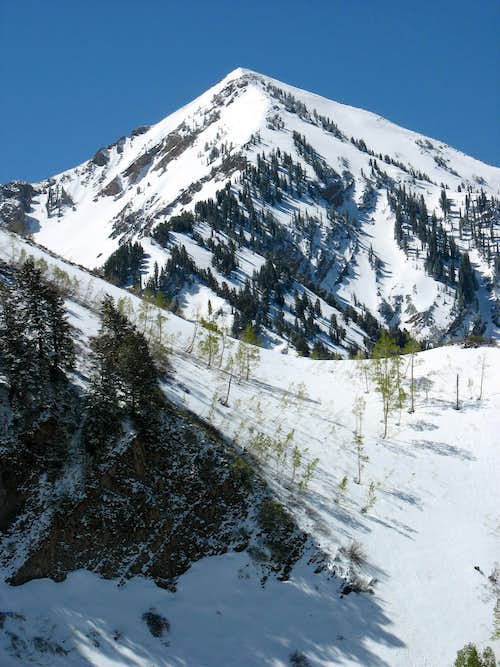 Late May on Provo Peak.

Backcountry camping is allowed, but there are no good places to camp along the West Ridge Route.

Backcountry camping in the lower canyons, such as Rock Canyon, Slate Canyon, or Slide Canyon can be good.

Below is the Climate Summary for Mount Baldy, located several miles north. The two mountains are listed as the same elevation, so climate conditions should be very similar on either peak.