The White Clouds were given their name by early settlers because many of these skyward soaring pale peaks seem to blend together with the clouds above, making it hard to tell where mountains stop and clouds begin. The White Clouds lie near the center of Idaho, entirely within the Sawtooth National Recreation Area. In the heart of the range there are over 90,000 acres of amazing terrain that became protected as The White Clouds Wilderness in 2015. But there is some great country to explore outside of the wilderness too. The area is home to numerous multicolor peaks, dozens of pristine alpine and sub-alpine lakes, and some of the most scenic hiking trails in the state. Common adjectives used to describe the White Clouds include spectacular, stunning, outstanding, rugged, magical, etc.

So if the area has so much to offer, then why isn’t it better known? One theory is that the nearby and equally spectacular Sawtooths tend to grab much of the spotlight. This likely contributes to the lack of recognition, but probably the main factor is that the White Clouds are generally not visible from paved highways or other improved roads. If you have the good fortune of viewing these mountains, it will likely be because you made a concerted effort to do so. For those who do make the effort, the reward is great. 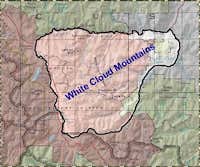 So what gives the White Clouds their light complexion? The range contains a variety of rock types, with many of the namesake peaks being composed of a kind of metamorphosed limestone, which is generally crystalline in nature due to prior contact with molten granite. This rock contains several minerals such as quartz, feldspar, mica, and hornblende to name a few. Also common in the area is granite from the Idaho Batholith along with Challis volcanic found at lower elevations in the eastern and southern portions of the range.

The result of all this is dazzling mountains whose diversity is sure to impress. Additional variety comes from the reflective nature of crystalline rock, whose appearance can change greatly depending on the lighting. Because of this, the color of the peaks is often influenced by weather conditions and time of day.

The area is a scrambler’s paradise, with nearly all of the summits in the White Clouds attainable by routes that are generally Class 3 or easier. However, due to lack of stable rock, technical climbing opportunities within the range are limited. Below are some of the more significant peaks. 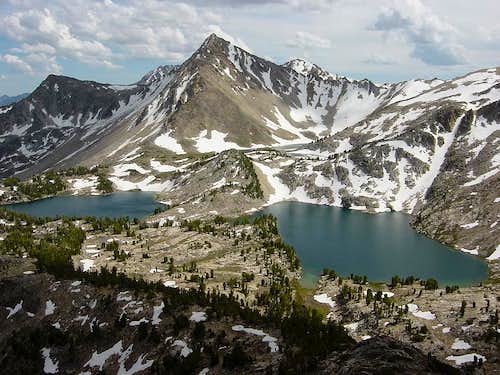 Many areas within the White Clouds are packed with lakes that can provide stunning scenery, great trout fishing, quiet solitude, and often all three. The range contains roughly 63 named lakes, and numerous more which are unnamed, for a combined total of over 120 by some counts. In addition, many of the highest elevation lakes in Idaho lie within the White Clouds, including ten of the sixteen lakes in the state listed over 10,000’ in height. In all, the range holds 40 lakes over 9000’ elevation according to the USGS’s Board on Geographic Names (BGN). The following are some of the more noteworthy lake attractions.

Historical information on mountaineering in the White Clouds is limited, but the following will give you an idea of the general history of the area.

The first explorer to lay eyes upon the area was British explorer and trapper Alexander Ross, who first viewed the Sawtooth Valley and its surroundings from a summit in the Boulder Mountains in the fall of 1824. Prior to his arrival, the area had long been inhabited by the Mountain Shoshone Indians, also called Sheepeaters, who lived off big game as well as an abundance of salmon in the Salmon River, which they dried as a source food during the bitter cold winter months.

Fur trapping in the area ended up being fairly unproductive, but population growth from miners entering the area during the 1860’s and 1870’s forced the Sheepeaters off their homeland and onto reservations by 1879. Gold and Silver discoveries in the area led to boomtowns springing up with the first permanent homesteaders arriving around the turn of the century. Mining and Ranching would continue to be prevalent for decades to come, with mining remnants still present in several locations within the White Clouds even today.

In the Political Spotlight

One of Idaho’s most famous and fiercest conservation battles began in 1968 when a mining company staked out Molybdenum claims at the base of Castle Peak and proposed an open pit mine projected to generate 7 million tons of waste yearly. The estimated concentration of the mineral was only 0.2%. Ironically, this mineral used in high strength steel alloys, is now in surplus worldwide.

Major public outcry over this proposal was the catalyst in driving congress to create the Sawtooth National Recreation Area (SNRA) in 1972. As a result, the Castle Peak area escaped demolition and over 750,000 acres of Idaho wild lands were designated for “recreation first” land management.

The White Clouds have continued to be a hot topic in Idaho conservation politics over the years. They were included as part of larger wilderness bills during the 1980's and 1990's. Later, Idaho Congressman Mike Simpson sponsored standalone legislation. But multiple attempts to pass his proposed Central Idaho Economic Development and Recreation Act (CIEDRA) were unsuccessful at gaining consensus. Staunch conservationists contended that the bill compromised too much and should include far more acreage. Motorized users felt it was too restrictive. Ultimately, growing momentum behind a National Monument status helped bring both sides back to the table and allowed wilderness legislation to fly through the US House and Senate in record time. In August 2015, President Obama put the final signature on an Idaho wilderness bill that allowed protection of 431 square miles of pristine Idaho wilderness. After decades of advocating and debating, The White Clouds Wilderness was finally a reality.

There is quite a bit of additional information available on hiking and scrambling in the area as well as extensive data on the lengthy political debate. I have found the following sources very informative.

There are several Idaho guidebooks that contain information on the White Clouds, but these two are probably the most useful.

Various information is available on the web, including these three interesting sites.