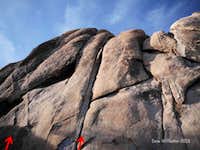 Conniption and Blue Wind
The best collection (located on one wall side by side) of pure crack routes in Joshua Tree National Park resides in Indian Cove. I had climbed over a 1000 routes at Jtree before stumbling upon this extraordinary wall named Wonder Bluffs. Seven beautiful crack lines share five different starts in a private corridor high above the Indian Cove campground. Besides remote routes up Rattlesnake Canyon and Dos Equis wall, there is little in the way of long and sustained trad lines at Indian Cove that compare to routes in the upper section of the park. What caught my attention regarding Wonder Bluffs was that Miramontes gave “stars” to all seven established routes in his 2011 guide. He, like myself, is quite judicious with his praise of routes at Jtree. After leading all seven routes in a single day, I question whether he gave several of them enough stars. The four 5.10 routes offer some of the best pure crack climbing I have done at Jtree. Even by Jtree standards, besides the 5.8, these lines are a bit sandbagged and internet summit logs reflect same. John Long and Keith Cumming established these routes in 1979. 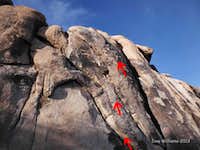 Negro Vortex and Gomer Pile
Wonder Bluffs is a northeast facing wall. In December and January, the entire wall receives a short period of sun in the early morning but it quickly vanishes. That being said, I enjoyed leading all the routes on a single day in early January when temps were approaching a high of 60F down in camp. The rock gets warmed up enough from the short morning sun for comfort to the touch and the shady aspect helps with your footing on the grainer than average granite. My favorites are the four 5.10’s by far. However the 5.7 (Dry Rain) is the most challenging at the grade I have led at Jtree. It is a far more interesting pitch than Double Cross for example due to its diversity. Two routes share Dry Rain’s start. The other four routes have their own individual crack lines from bottom to top. The 5.8 (Slam Dunk) is the only one really not worthy of its “star” status due to being too short and not sustained enough (way easier than the 5.7). But Pencil Neck Geek (5.10b), Dry Rain, Negro Vortex (5.10a), Blue Wind (5.10b) and Conniption (5.10a) all deserve three or four star status when compared to like rated climbs in Miramontes book. I can only speculate that he or whoever gave him the beta for this wall was so overwhelmed with the overall quality of each line, he/she was hesitant to dish out that many stars for each route. Pencil Neck Geek and Conniption each received two stars and the others a single star in his guide. There is one fixed rap above Negro Vortex in which you can descend all the routes with a single 60m. 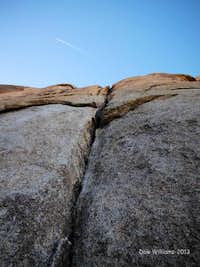 Blue Wind
Walk from your camp site to King Otto’s Castle located in the center of Indian Cove. To the south, you can clearly see Wonder Bluffs as the clean wall with cracks located approximately 400’ above the desert floor. Hike south pass Condor Rock on your left and scramble up the large boulder field to the base of Wonder Bluffs wall. There is not a noticeable trail. When you get to the base of the wall, you will be in a corridor with large boulders, there is no even ground. It is not straight forward to move back and forth along the base of the wall, you have to meander. I found it made sense to warm up on the easiest and shortest route to the far left, Slam Dunk, and then move from left to right finishing the day on Pencil Neck Geek. 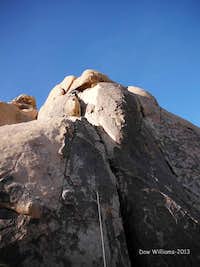 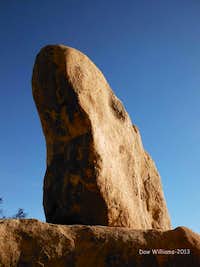 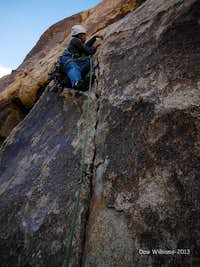 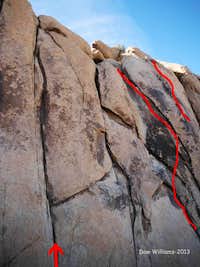 Blue Wind, Negro Vortex and Gomer Pile
Slam Dunk is the best warm up pitch as it is the easiest and sunniest. My preference is to do the entire wall left to right in order. Slam Dunk is also the least interesting of the group; meaning the shortest and less sustained. The 5.7 (Dry Rain) is a much more challenging pitch. The other six routes are absolutely stellar. There is no fixed rap as referenced in Miramontes book atop Slam Dunk. Rather traverse right under the roof above and walk west to the lone rap station above Negro Vortex. Dow

The thin splitter start is the crux of this pitch. Great fingers give way to a chossy flaring crack. My suspicion is that the 5.10a rating applies if you traverse left to the first cave to avoid the upper run out flaring gritty water runnel above the finger seam. The upper roof hand crack pull is as awesome as it looks. A C4 #5 protects the exposed move well. From there, great hands follow up steep ground. Dow

Blue Wind has a risky start. If you place gear in the lower pod, you are making a solid 5.10 move off the deck without solid ground below you (boulder field crevasse). After the first several meters of fingers and layback you reach great hands that lead you to a gritty flaring double crack. I found several off-set cams helpful here. The water runnel helps for feet. Good foot work is imperative through this section. It finishes easier as they all do on this wall. Dow

This is a hard line to read but what I found to make a great pitch is to start on Dry Rain and at the roof, take the immediate horizontal hand crack on the black rock (left). This is some of the roughest granite in all of Jtree. It is hard on the hands, but your feet stick like glue. The crux is getting this traverse while placing gear. Before the next roof, head straight up between cracks to the above obvious left leaning steep hand crack. The entire line is well sustained and a bit sandbagged for 5.10a. Dow

This is the second of three routes that share the same start. Again, start on Dry Rain, but stay with it until the last crack option that ventures up and left. Exit the wide crack and take the hollow flake up to a hand crack. Fun full-movement climbing for a 5.9. Dow

This is one of if not the most challenging 5.7 you will lead at Jtree. It deserves maximum praise in that it offers so much varied climbing for a 5.7 pitch. I would love to teach an advance leading course on this pitch. Start out in the really cool wide crack corner and turn the roof to the left via a few strategic hand jams underneath. Once you pull the roof, you enter a short section of chimney with a short bit of off-width to finish. You can set a top rope with a long extension on medium gear. Dow

Not as sustained as Blue Wind and perhaps not as challenging as either 5.10a pitch. But this sculptured finger crack is a piece of beauty and makes for a fantastic pitch on small gear to a slung rap.  As it starts getting cruxy near the top and closes down for gear, stem and traverse right to the open crack and easy ground directly to the slung horn above. Dow