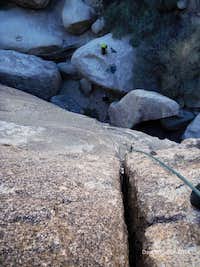 Squaws in Heat, 5.9
Indian Country offers up one of the more remote walls reached from Indian Cove and really for all of Jtree in that regard.  Miramonte has Indian Country listed in the Rattlesnake Canyon section of his guide, but it is located in the upper reaches of what has been named Middle Canyon. There are several outstanding routes, Party Till Ya Puke and Party in the Desert (both 5.10bs), that are easily reached along Corral Wall at the entrance to the canyon. But after that the climbing gets rather obscure with rarely climbed areas named Ponderosa, lower and upper Dodge City, Indian Country and Cactus City. The approach for Indian Country, which is the most remote of the before mentioned, requires bushwhacking, boulder hopping and fifth class climbing toward the end. You are rewarded with face sloughing and grainy (=chossy) north facing granite with few if any routes worthy of the approach effort. 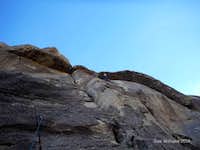 Little Big Man, 5.8
In the moderate trad range on Indian Country, Squaws in Heat (5.9) is decent, Little Big Man (5.8) average and the Flamboyant Arrow (5.9) chossy as hell. There are two fixed anchors on the wall and we had to replace the webbing on both in 2014, evidence that these routes see few ascents and have never been cleaned much by traffic or the FAers. Most of the routes on Indian Country were established in 1992.

From the Rattlesnake Canyon trail head at Indian Cove, hike up the wash to where Middle Canyon splits right before Rattlesnake Canyon heads up and left along the deep slot. Head right and take the short boulder hop up into Middle Canyon and hike past the sunny south facing Corral Wall on your right. Continue through the thick brush aiming for a small gap to the southwest. Do not head up and right too early.  Once through the gap, take the second drainage on your right towards Upper Dodge City. Stay left when in doubt. The brush is heavy with a fair amount of obstacles in the wash. As you near Upper Dodge City which is a tall north facing wall up and left, fork right up a steep boulder filled gully (Indian Country is never in view). A few 5th class moves on the right side of this steep drainage leads you up to slabs that head west to the tall north facing wall that is Indian Country. Despite the slabs, there is still plenty of cactus and brush to navigate. Depending on which route you want to start with, head for the wall. You cannot hug the wall to go back and forth between routes very easily. Several of the routes actually begin atop massive boulders.