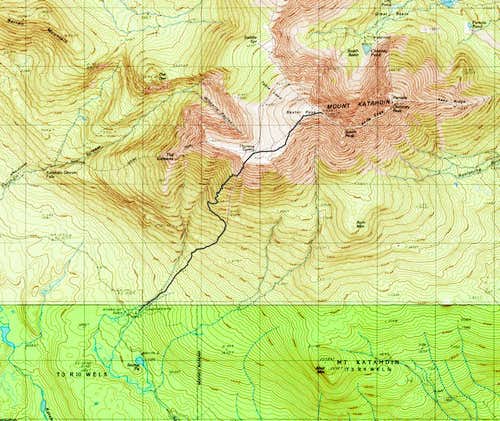 Topo map of Abol trail
Being the most direct access to Baxter Peak, the Abol trail has the reputation to be steep and relentless. Is this good or bad depends on your goal. The nearby Hunt Trail is less monotonously steep and offers wider views, but if you wish to see fewer Appalachian Trail through-hikers, or you just prefer a shorter and more challenging route, then the Abol will be your choice. It is possible to continue from Baxter Peak to South Peak, the Knife Edge, and Pamola Peak, but if your primary goal is a day trip over the Knife Edge then you should consider the Helon Taylor trail, which also has easy road access.
The Abol trail was closed from spring 2014 to summer 2016 due to a rock slide that occurred in 2013. A new trail segment has been opened, which, before reaching the rock slide, will diverge to the northwest, making a traversing ascent before switchbacking along the rib that is west of the slide. The route is now slightly longer (3.6 instead of 3.2 miles), less steep (average 30% instead of 47% on the slide part), and slightly easier (less scrambling and firmer ground). However, the most challenging part, the upper slide, remains unchanged. The GPS track on this page includes both the new and the old trail.
For some reason, BSP's website lists the Abol trail's length to be 3.4+1 mile, and this mistake is copied by various websites. Even the summit sign reads 4.4 miles to Abol campground. But it really is 3.6 miles. Don't just believe me, check your map.

The trail head is within the Abol Campground between lean-to 11 and 12, about 0.1 mile from the Abol parking lot (1300 ft elevation). The campground is on the perimeter road 5.8 miles from the park's southern entrance. 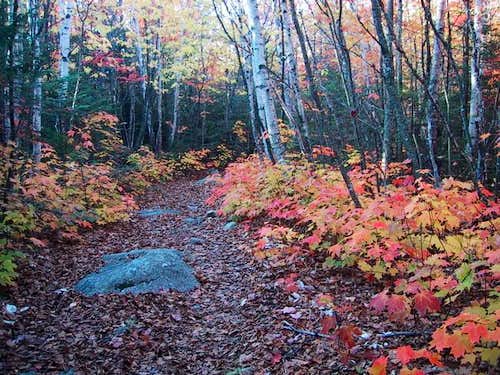 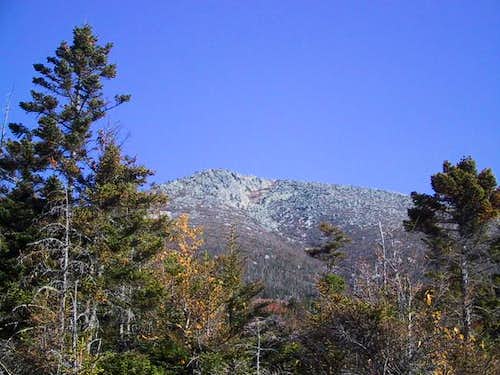 Partial view, but this is not the summit
The trail starts as an easy wooded trail at 1340 ft elevation. On this lower section, the trail follows a streambed as often as not. Gradually, the slope increases and the trees thin out just enough to afford partial views.
At mile 1.4 and 2560 ft, the trail veers westerly just before the rock slide (once the route of the trail). This part is well engineered, and after the initial traverse, switchbacks steadily up until the tree line.
Soon after, your will reach tree line (mile 2.1, 3500 ft), and enter boulder-hopping territory. 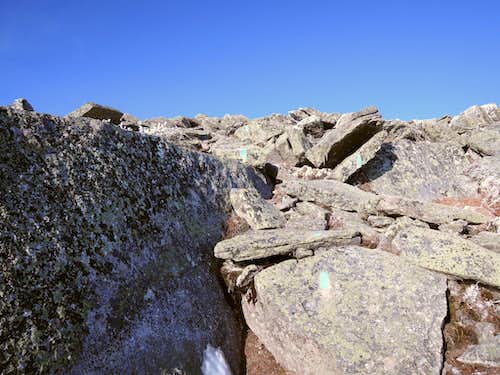 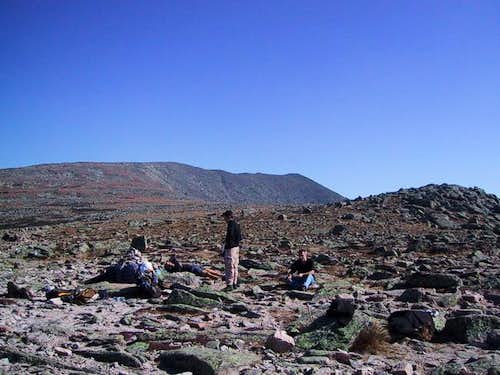 Tableland
At mile 2.4 and 4060 ft, the trail traverses east and meets the slide (and the old trail). Hands get more and more useful instead of walking poles as boulders get bigger, but it doesn't get more difficult than YDS 3-.
The summit plateau is reached at mile 2.6 and 4620 ft, and the trail flattens. It then intersects with the Hunt Trail by Thoreau Spring. The Abol trail officially ends here. The Baxter Cut-Off continues north-northeast, avoiding Baxter Peak and instead providing a flat route to the eastern edge of the Saddle. Take a right on the Hunt Trail to bag the summit.
Total 3.6 miles. +3960/-40 ft. Book time 8 hours return. 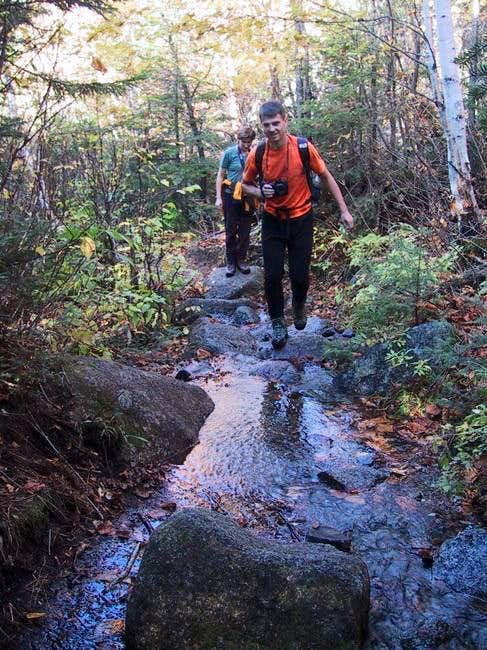 Of waterproof boots
Nothing other than the usual New England weather gear.
Waterproof boots are a good idea though not really needed if you watch your step.
Some way to attach your walking poles to your bag to free your hands on the upper slide is nice.
There is no water after the first mile. Thoreau Spring is not always reliable in late summer.

Check with the park rangers before planning a climb in shoulder season - when we were there in October, the rangers had closed the top of the mountain for a day due to a couple of inches of snow. The trail up the rock slide would be very slippery with only a little snow or ice. I've climbed other New England peaks in icy conditions using just crampons and poles, but I wouldn't want to try it on the rock slide: arrest could be a real problem. See below. 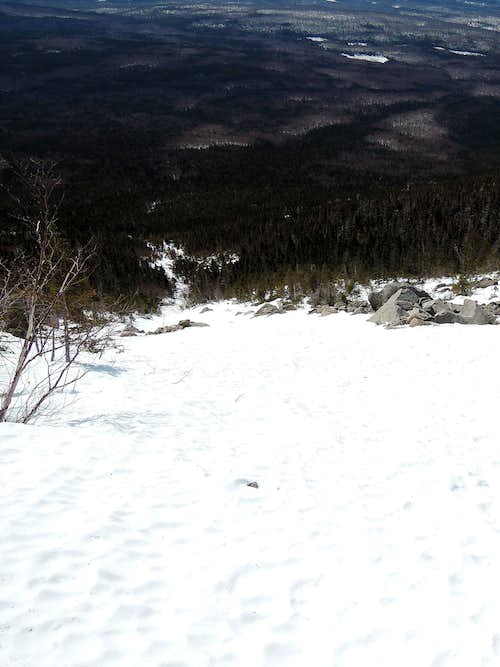 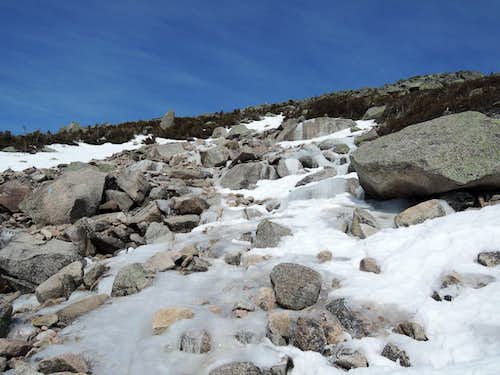 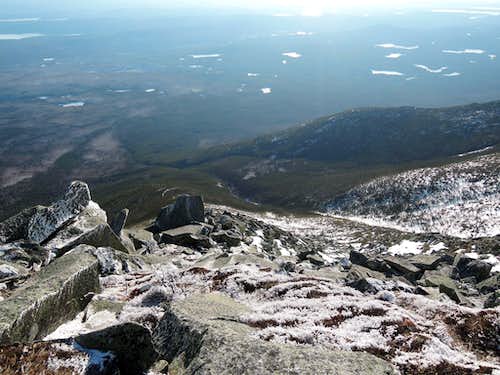 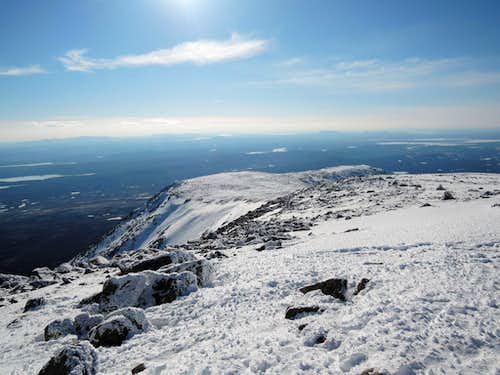 Snowed-in lower slide. Mid-slide. Upper slide. Tableland.
After 10 years of clean record, Katahdin saw three deaths in 2017. While two of them were due to medical events, one was the direct result of a slip and fall on the Abol slide. With more distance to cover and more elevation change, Katahdin is at least as challenging as mount Washington in the winter, and it is certainly more committing (in the mountaineering sense) with its overnight stay and its further distance from help. Check weather, consider avalanche risk, and make contingency plans.
Most winter ascents are done from the heated Chimney Pond bunkhouse to meet ice climbing, mountaineering or back country skiing objectives, but for those who only wish to bag the summit, the Abol trail is the way. 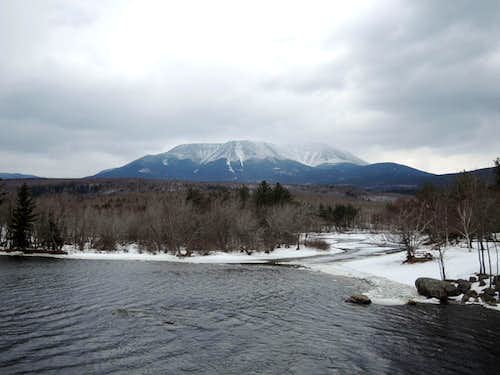 Katahdin from Abol bridge. The (-shaped snow band is the Abol slide. We had less snow than the typical winter day. The summit is in the clouds.
Park at the Abol Bridge parking lot and walk, snowshoe or ski 4.7 miles (+720 ft) on the Abol Stream trail, Abol Beach road and tote road to Abol campground. Skiers may want to boot up and down one hill just before Abol Pond. Most parties will overnight at Abol campground and carry on on snowshoes. If previous users have not postholed the next section, skiers can skin up to the base of the slide.
Consider going up the old Abol trail. It is faster to move up the snowed-in slide than the new trail (think chute vs switchback on mount Whitney). In perfect snow, getting up and down the slide may even be faster in the winter than in the summer.
From where the new trail turns left (you went too far if you start traversing left), bushwhack forward for 300 feet until the bottom of the slide. Some faint blue blazes may still be seen. As you go up, the snow will lessen and you may have to scramble rocks, but this will happen later on the slide than on the trail (due to smaller boulders). Depending on snow conditions, consider caching the ice ax at this point and using hiking poles on the tableland.
When there is a lot of new snow, the tableland and part of the slide may be skied, but the slide may well be at risk for avalanche. You don't do Abol for the ski. Usual precautions apply for glissading.
On the way down, on the new trail, the snow may cover the boulders and therefore the blue blazes, so remember where the trail enters the wood. On the old trail, on the bushwhack at the bottom of the slide, it is safer to off-shoot slightly right.
Ice ax and crampons are mandatory. Consider a compass or a GPS for the off-trail part and, with a rope, for retrieving the slide in case a whiteout hits while on the tableland. Consider a shovel, avalanche safety gear and emergency bivouac essentials. Expect to be alone.
By the slide : 8.1 miles one-way, +4820/-160 ft. Approach 2 hours, up 5.5 hours, down 4.5 hours, "deproach" 1.5 hours (snowshoe); we had perfect weather (blue sky, no wind, 10F at summit) but not enough snow (along with ice between boulders, see images).