For many people, their only image of Nebraska derives from driving across the state on I-80, in the very flat Platte River valley. They would be very surprised then, were they to see Barrel Butte and West Ash Creek Canyon. Barrel Butte also stands in stark contrast to Nebraska’s rather flat high point, Panorama Point. Though the Pine Ridge region drops in altitude from west to east, Barrel Butte is still higher than many of the summits to the west, including its landmark neighbor, Crow Butte. 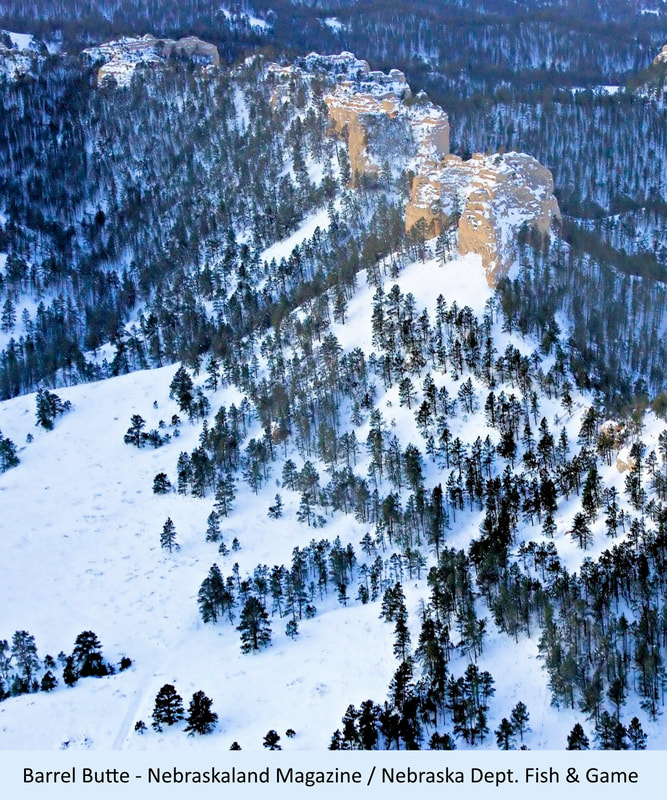 Perhaps the extra relative height of Barrel Butte was a contributing factor to two separate plane crashes there. A GP Express Cessna passenger plane crashed there in 1987 and in a separate crash, a small private plane hit the west face of the summit with enough force that part of it was thrown over the ridge to the other side. The wreckage of both planes remained largely obscured until the great fires of 2012 destroyed most of the forest there. Barrel Butte is part of a ridge system that lies roughly on a north-south axis, with the west side facing national forest land, and the east and north sides as parts of the 1,271-acre Bighorn Wildlife Management Area. 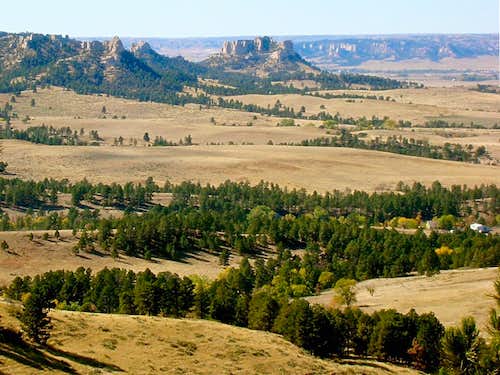 As one of the state’s steepest publicly accessible summits, and in a remote area of the Pine Ridge, it provides an excellent opportunity for hiking and scrambling. There are two main rocky buttresses that are the distinguishing characteristics of the butte. The northern buttress is the true high point of the butte, though not by much. The west side of Barrel Butte has very steep slopes up to a sheer wall that runs the full length from the north end to where the butte fans out with several tree-covered ridges both west and east. The east side also has very steep slopes up to the buttresses, and is almost as sheer, though each buttress has a steeply-sloped break that allows a challenging scramble to the summit. Certainly, this summit provides nearly perfect habitat for the bighorn sheep that live in the area.

Unfortunately, the Barrel Butte bighorn herd has suffered population fluctuations in recent years.  Chronic outbreaks of pneumonia have caused the greatest declines in herd population at times.  Additional impacts have come in the form of coyotes and mountain lions.  Still, a small herd resides in the area. 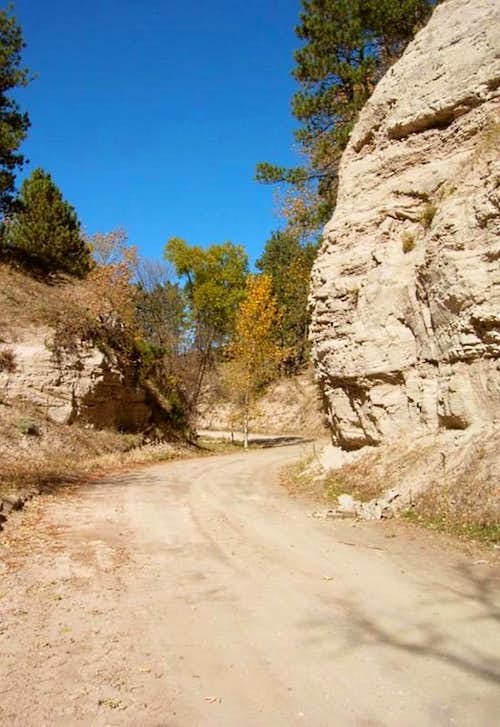 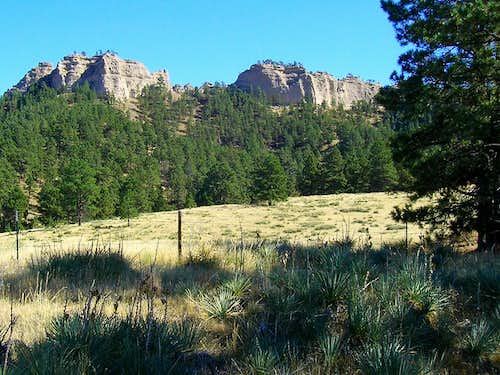 To hike to the west side of Barrel Butte, travel west from Chadron on Highway 20, just over 17 miles, then turn south on Hartman Road. From Crawford, drive east about 7 on Highway 20 to reach Hartman Road. Once you are on Hartman Road, go south 3 ½ miles, then turn east on West Ash Road and follow it for about 2.8 miles (it will curve to the south). You should be just to the west of Barrel Butte. Since no vehicles are allowed on forest service land, you will need to find a safe place to part just off West Ash Road. 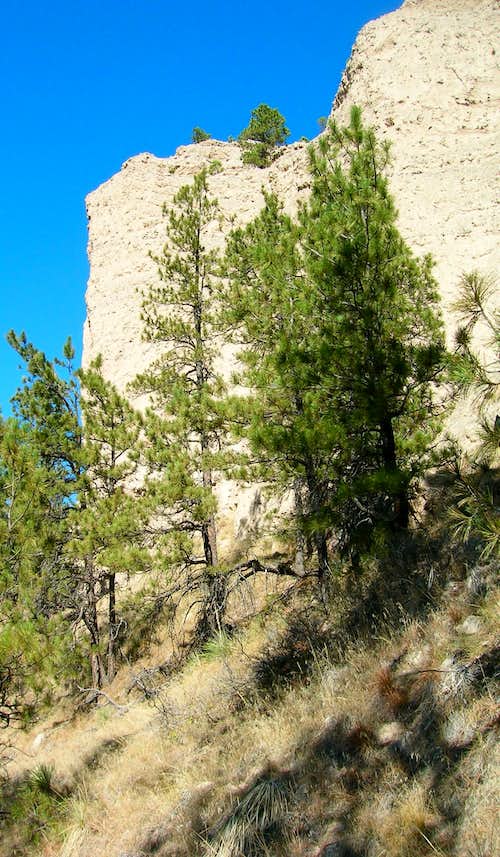 Barrel Butte lies in the Chimney Butte USGS Quad. A national forest map is always helpful in determining boundary lines and reference points. Technical climbing is not really possible on Barrel Butte due to soft and unstable rock. Like so many of the buttes, rocks, and small peaks in Nebraska, the rock and soil composition is a combination of sandstone, siltstone, chalky limestone, and volcanic ash. This should make any climber cautious when using small protruding rocks for hand or footholds when scrambling. Any options for using trees for anchors ended in 2012 when massive forest fires destroyed most of the trees on Barrel Butte. There are two primary approaches to reach the summit of Barrel Butte – one from the east and one from the west. But both will necessarily end on the east side of the two buttresses, since technical climbing is not feasible on the west faces. The map here shows each of those routes.

East Route This route is probably the preferable route, since there is not as much fallen timber, plus an old road you can follow on foot to get you much closer to the east faces of the two main buttresses. Ultimately you will have to create your own bushwhack route to the buttresses. Line-of-sight on this east side will be easier than on the west side. The map on this page will help you see your options here. If you hike all the way from Bethel Loop Road, your route will be at least 3-miles one way, with an elevation gain of about 600 feet. Your hike will be less whenever the Bighorn WMA road is open part-way.

West Route There are some old gates on the fence line that parallels West Ash Road. One of them has a faint old road on the other side and that road winds around to just below a little dam. Just beyond the dam, there is a cluster of burned trees, with fence running both north and east. The east fence line runs most of the way up toward the north buttress. If you brought a forest service map, it will show you that fence line. While there are faint traces of a few other very old roads on the west side, your hike to the buttresses will really be bushwhacking. Because of the current snag dangers, you will want to hike the open areas as much as possible. This route is about 1.3 miles long one-way and gains about 600 feet in elevation. 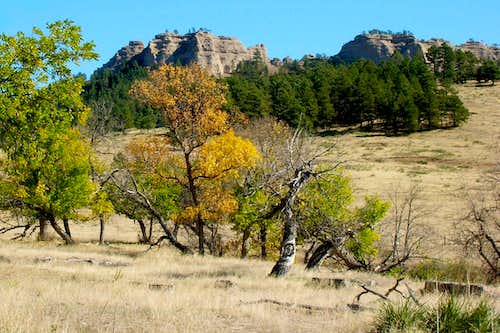 Both sides of the butte are under different jurisdictions. However, illegal campfires are probably the greatest concern to both. Many local hikers carry firearms because of the growing mountain lion population in this remote area of the Pine Ridge. This is legal. However if you choose to carry one, be aware of the hunting seasons and how game wardens interpret things. For example, carrying a .308 rifle into the wilderness during deer season will likely get you a severe fine if you do not also have a deer hunting license. On the other hand, a revolver will normally never be any concern to a warden (assuming you have left it in the holster).

The Barrel Butte area is open year-around. But this does not mean that conditions to hike and climb are always optimal. Summer hail and lightning, along with slippery rock, are not good times. Neither is winter ice or blizzards. Again, this area is remote and if you run into problems you cannot count on cell phone reception or other hikers to rescue you.

For the latest weather forecast and conditions, click on this link:

Hunting seasons should also be of concern, with fall deer season and spring wild turkey season being the time where the largest number of hunters will be out. For more information on Nebraska hunting seasons, click on the link below: 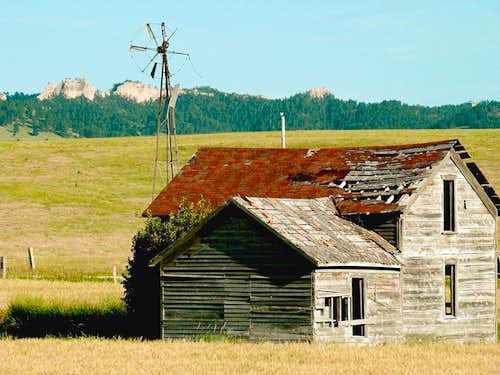 No camping is allowed in the Bighorn Wildlife Management Area. There are some camping options in the Nebraska National Forest nearby. There are also camping and lodging options at nearby Fort Robinson State Park, Chadron State Park or the city of Chadron. For more information on those options or for other information, choose a link below to visit: