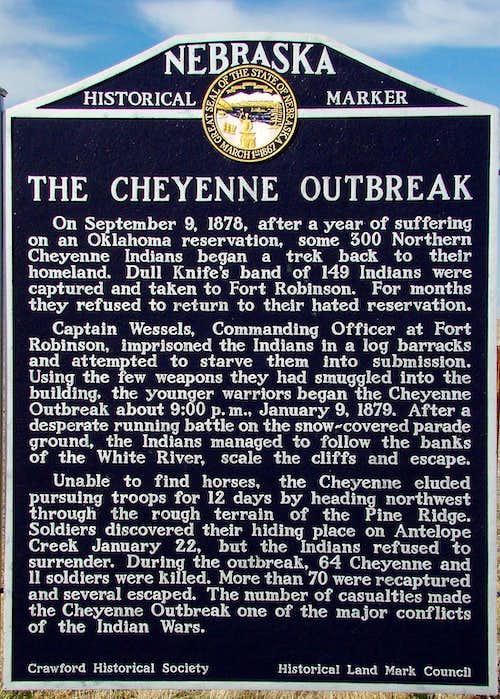 One of the most interesting hikes at Nebraska’s Fort Robinson State Park, is the trail up to the summit ridge of Cheyenne Buttes. The whole area was the location for one of the darkest events in the fort’s history, the infamous Cheyenne Outbreak of 1879. This incident led to the name for the buttes. The 1964 film classic, Cheyenne Autumn, starring Richard Widmark, Jimmy Stewart, and Edward G. Robinson, spotlighted the event, which had been largely forgotten since the late 1800’s. While Hollywood put their own spin on the story, the actual events stirs thoughts of desperate Native Americans seeking refuge in the rugged terrain of the Cheyenne Buttes area. 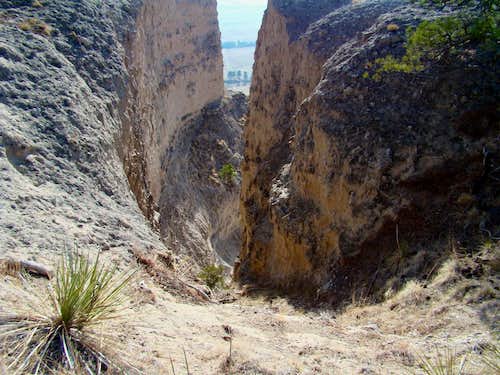 An unusual swirl crevice in the south face

Escaping from an Oklahoma reservation late in 1878, about 350 Cheyenne traveled north in an attempt to reach their traditional homelands in Montana. Because of hunger, a group of nearly 150 led by Chief Dull Knife, split from the rest and came to Fort Robinson to seek out their friend, Sioux Chief Red Cloud. Instead of finding him there, they met only soldiers and were eventually imprisoned in an unheated barracks building. On the evening of January 9, 1879, they managed to break out, only to get into a running gun battle with soldiers, along the White River. The Cheyenne were able to complete their escape by fleeing into the very rugged area that would later be named ”Cheyenne Buttes”. Some of the natives were captured twelve days later, after another battle northwest of there, near Antelope Creek. Chief Dull Knife and his family managed to escape again, eventually re-joining his fellow Cheyenne. The Cheyenne Outbreak led to the deaths of 64 natives and 11 soldiers – truly a somber chapter in the history of Fort Robinson.

Getting There & Routes to Summit

Rising over 500 feet above the nearby White River, the rugged and majestic Cheyenne Buttes are a favorite stop for photographers. A majority of the people who visit Cheyenne Buttes access the summit by a state park Jeep or by horseback. But Cheyenne Buttes is also open for hikers and climbers to explore. The map in this section shows the most-commonly used route to the summit – sometimes referred to as “the Jeep Trail”. It is the old Smiley Scenic Drive, which is now off-limits except to state park and emergency vehicles. Also shown on this map is the Cheyenne Buttes Trail, which is a lesser-used route that takes hikers from another trailhead (of sorts) on Smiley Canyon Road, 1.8 miles west from the east trailhead. This is more of a trail crossing, where distance hikers or runners can connect with the Smiley Canyon Loop Trail. There is a small parking area about .3-mile further west on the Smiley Canyon Road. This trail is 1.8 miles from the trailhead to where it joins the main route to the summit ridge.

Additional trail information can be accessed online through the Nebraska interactive trails map by clicking here: Nebraska Interactive Trails Map Most people reach the Cheyenne Buttes Trailheads by driving out Smiley Canyon Road and accessing the eastern trailhead from the road. It's about 2 1/2 miles past the White River, where there is a small parking lot. It's not more than a mile to the summit, and you can either return the way you came up, or hike the rest of the loop, which will require you to walk 2 tenths of a mile back down the road from the west trailhead to the east trailhead where you started at. The trail loop is only about 2.2 miles with about 330 feet of altitude gain from the east trailhead to the high point on the trail. 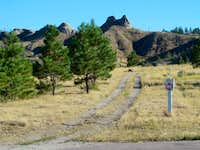 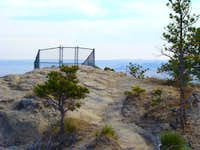 Fort Robinson is open year-around. Hunting is allowed in season, so if you prefer not to hike while people are hunting, check with the state park office before you plan your trip. Weather conditions will also affect hiking decisions, so please make sure you have the most up-to-date forecast. You can access the Fort Robinson weather forecast and conditions by clicking here: 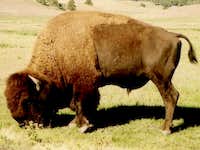 Master of his territory 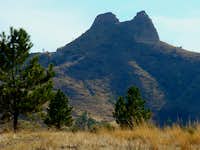 A state park permit, either daily or annual, is required to enter the park by car. There are often restrictions on campfires, due to the number of major forest fires in recent years. Park officials are justifiably concerned about fires, so they do enforce restrictions. There are firearms restrictions between Memorial Day and Labor Day. The land to the south, down to the White River, is owned by Chief Dull Knife College. At the southwest boundary of the state park, lies the Peterson Wildlife Management Area. Buffalo are often in the large east pasture, which winds around to the south side. The buffalo pastures are off limits to all traffic, including hikers and climbers. So any climbing around the cliffs must be done on the buttes side of the fence. 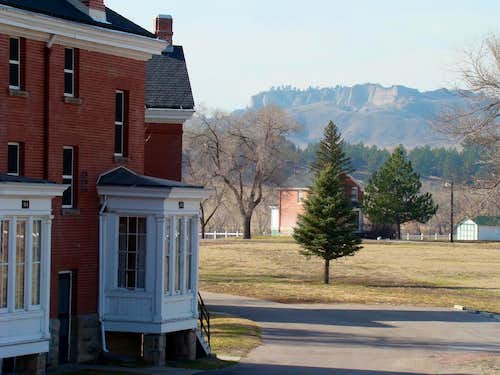 Fort Officers Quarters with Cheyenne Buttes in the background

Fort Robinson State Park has a wealth of historical information, with museums and marked locations. Visitors can actually stay in the old barracks and officer’s quarters, plus dine at a restaurant in the old administration building. And, the fort has a great swimming pool, where you can cool off after a hot and dusty day of exploring. On summer nights, the fort’s Post Playhouse offers great entertainment, put on by theater students. 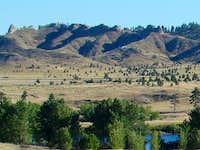 North Side of Cheyenne Buttes

Camping at Fort Robinson is allowed only in designated areas. For more information on Fort Robinson and the area, click on the links below, or call the numbers listed: