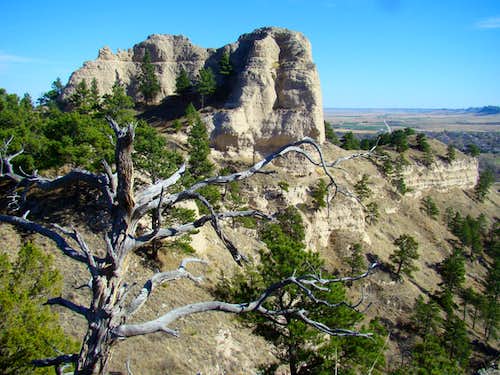 One of the most well-known landmarks in the area around Fort Robinson State Park and Crawford, Nebraska is Saddle Rock. The popularity of this saddle-shaped rock goes back to the 1800’s when old Fort Robinson was a major training facility for the U.S. Cavalry. Saddle Rock is prominent on the northern skyline of the town of Crawford. It’s not unreasonable to assume that over the last 150 years, several thousand people have hiked up to the summit area of Saddle Rock, with many of those making the steep scramble to the summit itself. 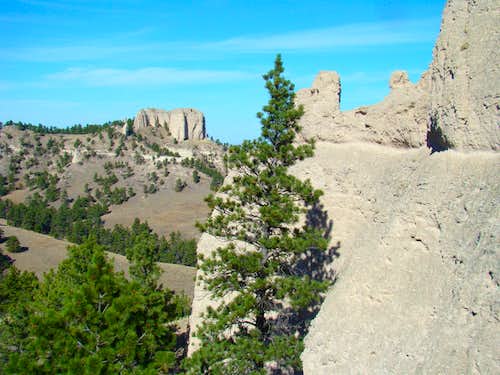 Like all the buttes in western Nebraska, Saddle Rock is comprised of what is locally called “butte rock”, which is really a composite of sandstone, siltstone, volcanic ash and clay. This does not make for the safest and most stable climbing surface though. To be sure, when it is dry it is rough enough for some grip. However, it also is prone to crumble and break, especially if it gets damp. Trying to climb here right after a rain storm or on an icy winter day is much more risky. Rock scramblers need to be aware of this when they plan to summit Saddle Rock. The view from Saddle Rock is outstanding, presenting clear views of many named summits in the area, including Crow Butte and Crown Butte to the southeast, Red Cloud Buttes, Cheyenne Buttes and Giants Coffin Butte to the west and Lovers Leap to the north. This is a fun hike and scramble for those with climbing skills. But locals who periodically climb the summit and who check their maps know about an apparent discrepancy… 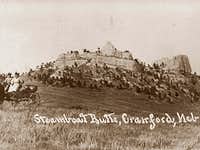 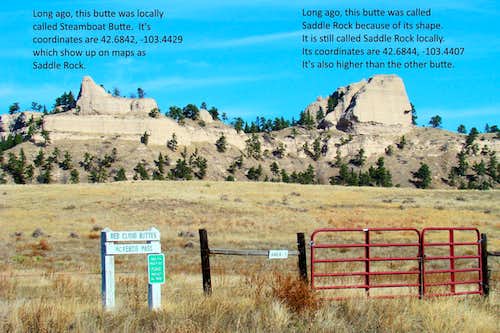 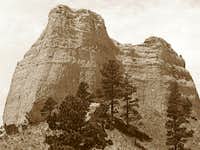 When “Saddle Rock” appears on most maps for this area, the coordinates given are actually for a smaller rock, historically known as “Steamboat Butte” (see old photo). The nearby higher rock that has been known for over a century as Saddle Rock is actually about .1-mile east. The map in the route section below shows the locations of each rock. As previously mentioned, Saddle Rock (see old photo) was named for its resemblance to the shape of a saddle. Whether this was named by soldiers at the fort or by townspeople is unknown. But the name has stuck, making it to the maps for the area, but probably at the wrong coordinates. Cartographic errors are rare, but they do happen and this is probably one of them. 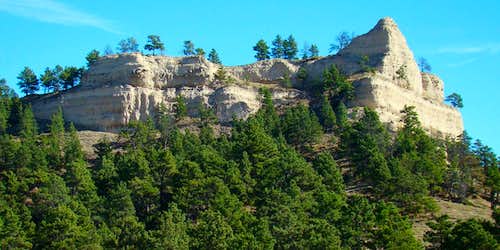 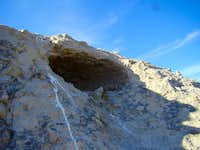 Steamboat Butte viewed from the west appears like it could be a challenging scramble. The trail out to Saddle Rock passes right below the east side of the summit rock, making a scramble to the pinnacle a steep, but fun climb. It’s not as high or challenging of a climb as Saddle Rock, but since it is conveniently along the route to Saddle Rock, why not?

From Crawford, Nebraska, go west on Highway 20. About .5-mile past the White River Bridge next to the Legend Golf Course, you will see a small parking area on the right. Find a place to park, then climb over the fence (the gate there is almost always locked). You are at one of the trailheads for the Wagon Wheel Trail, which will take you on to McKenzie Pass. 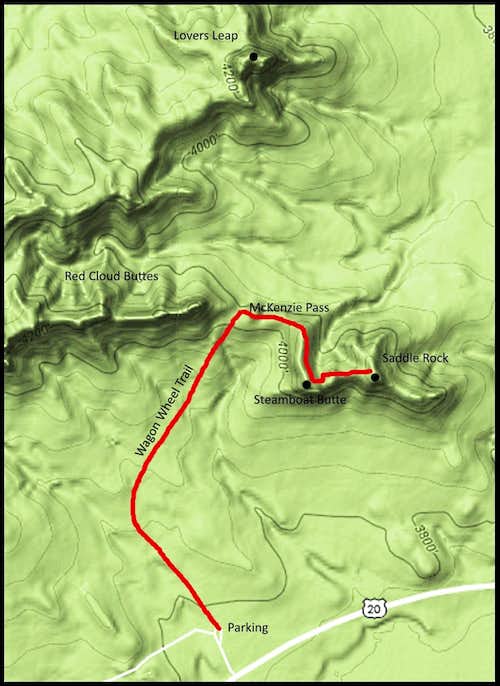 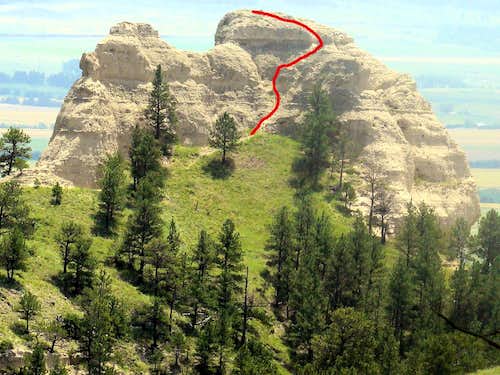 Once you are over the trailhead gate, look for the white post trail markers, which sometimes have small diamond shaped signs. Following them, you will head in a northerly direction until the trail curves to the northeast. The highpoint on this section of the trail is a saddle between Red Cloud Buttes to the west and Saddle Rock to the southeast, which is McKenzie Pass. There you will find the un-named single-track trail to Steamboat Butte and Saddle Rock. The elevation gain from the trailhead at the parking lot takes you from 3,790 feet to 4,150 feet at the summit of Steamboat Butte and to approximately 4,170 feet at Saddle Rock. The one-way trail distance shown on the Saddle Rock Route Map is 1.1 miles to Steamboat Butte and 1.2 miles to Saddle Rock. McKenzie Pass is .8-mile from the trailhead. The state of Nebraska also has an interactive trails map that shows all other route options, including the best route which is shown on this page. You can access that map by clicking on this link: Nebraska Interactive Trails Map 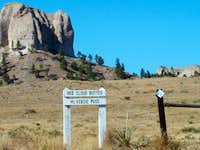 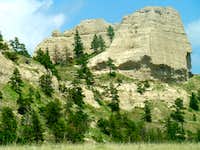 This is public land at Fort Robinson State Park. There are many horseback riders on the trails at certain times during the year, though the trail from McKenzie Pass to Saddle Rock is not popular with them. Hikers need to give right-of-way to the horse traffic when they do encounter equestrians. It will be to your benefit to also check at the office in regard to any current hunting seasons underway. If there are any, they will give you any advisories, which will no doubt include a request to wear plenty of bright orange. Campfires are strictly regulated by the state park, as are fireworks and firearms. There is no prohibition against carrying pepper spray, however.

When to Hike & Climb 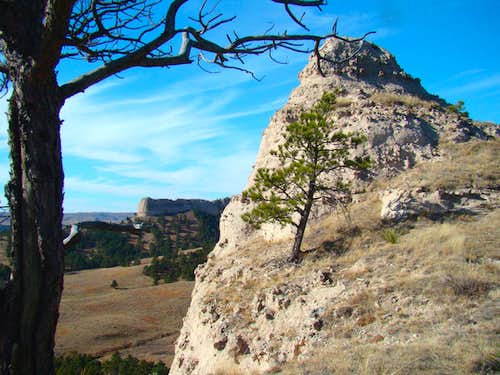 Ticks season generally runs from March through August. Rattlesnakes generally do not come out of hibernation around the area until April, though if it is an early and warm spring, they have been seen earlier. They generally go back into hibernation in October or November when there are multiple freezes. Weather can pose hiking and climbing risks also. Summer lightning and hail, or winter blizzards and ice make for very poor outings. For the latest forecasts and conditions, please check this link: 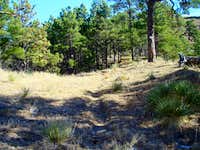 A word of caution is warranted here in regard to the longhorn cattle kept at Fort Robinson. If your planned route brings you into their area, it’s to your advantage to revise your plans to keep a safe distance. The buffalo pasture is over near Cheyenne Buttes, several miles west, where great caution is also warranted. 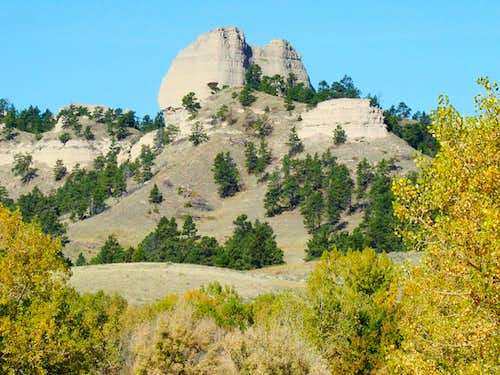 There is great camping and lodging at Fort Robinson State Park and at the nearby town of Crawford. Soldier Creek Wilderness offers more primitive camping options. For more information, check out the links below: