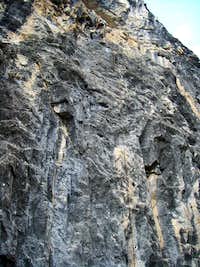 Black Feather Canyon was one of the last of the established crags I climbed at in the Canadian Rockies (2008). Black Feather is a relatively new addition to sport climbing in Banff National Park and few folks have yet to climb here. Among the established routes in the canyon are several abandoned projects. Due to its location (elevation and lack of sun) there would be few days that it would even make sense to climb at Black Feather during a given year. On a pleasant summer Saturday, my wife, dog and I had the entire canyon to ourselves. 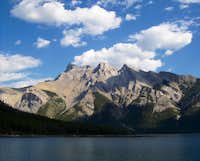 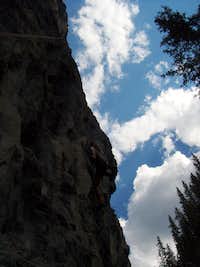 Black Feather Canyon has been broken down into three main walls with quite a few miscellaneous routes scattered in-between. Rainbow Wall is the first wall on the left and the routes here are quite polished (water worn) and uneventful in general. The best climbing at Black Feather by far is what they call the Punk Wall all the way back at the head of the canyon on the left. There are fantastic 20m-30m moderate lines on great rock to the right of what is named Punk Gully as you face Punk Wall. Directly across from Punk Wall is Mind Games Wall. Punk Wall is south facing and comprised of much better rock. Mind Games Wall is comprised of more of a clay sediment and is north facing.

Over 30 routes have been finished at Black Feather Canyon and not all are necessarily named. There appear to be several abandoned projects as well. Due to the remoteness of this canyon, I doubt if it is developed much further or if it really needed to be developed in the first place. If you are looking for an adventurous approach and are in want of something new however, the Punk Wall routes are worth the visit. This is grizzly country involving at least two published attacks on humans the past two years. Black Feather Canyon is chock full of one of the Grizzlies' favorite meals, Buffalo berries which were ripe when we climbed there in mid August. I advise leaving the dog and tuna sandwiches at home.

Park at the Lake Minnewanka parking area and hike north along the lake crossing the inlet canal (old Cascade River) over a foot bridge. Take the first marked trail (Stewart Canyon Trail) on the left and follow it up and down for about 20 minutes (along the canal) until you reach the mouth of a canyon. Before you enter the drainage itself, there is a narrow (not maintained-2008) trail on the right that heads east. Either take the narrow trail or just ascend the drainage up canyon. There will be some bushwhacking either way. Eventually you enter the narrow canyon outlet with a few bolted routes on your left. I advise skipping these first walls and continuing up canyon for the much nicer and less polished routes at the head of the canyon.

The Trans-Canada Highway dissects Banff National Park east to west as you come in from Calgary. Take the first Banff town exit and turn right (east) on Lake Minnewanka Road for 5.5 km to the Marina. You are almost guaranteed to see plenty of mountain sheep on this road and at the Marina.

Routes are Listed Left to Right, West to East 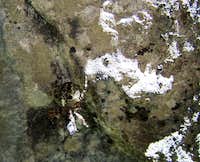 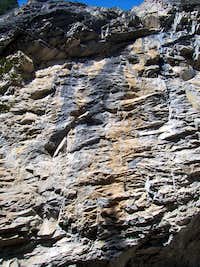 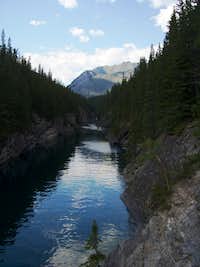 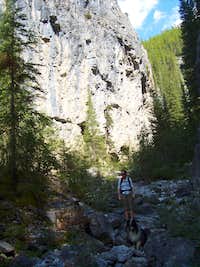 First route on the left as soon as you access the narrow portion of the canyon heading east. Most of this rock is quite water worn and not worth climbing. On our first trip, we just started climbing the stuff, but I would avoid Rainbow Wall completely and make for Punk Wall. Eight bolts to anchor.

Next route, to the right of the mossy section. Shorter route, five bolts to anchor.

So as you exit the real narrow section and those first few routes on Rainbow Wall, you pass a very steep and clayish undercut wall on the left with several projects and perhaps a few finished routes. The climbing was way over my head, so we kept traveling up canyon and noticed a short wall on our left with three short routes. The first one to the left is five bolts to anchor.

The middle route on this wall. Real fun side pull move over a roof on this one, decent rock too. Kind of gives you a glimpse of what is to come on Punk Wall further up canyon. Took a photo of a very cool spider here. Start to run into large patches of Buffalo Berries as well.

Easiest route in the canyon, in a scoop to the right if you have someone who needs to practice their sport lead.

Good route. Real tough crux move in a scoop. Easier to bypass to the left. But to stay true to the route, it is quite blank. Well bolted where it needs to be though. Six bolts to anchor.

Best route thus far for me back here (2008). Shows you a little of everything. Not near the move required anywhere on route as with London Burning, but quite sustained in the low 5.10 range. Tons of fun. Angle out right of belay by large tree. After five bolts, move back left and finish on easier ground straight up through four more bolts. Close to a 30m route.

Another great route to go along with this group. A tad easy for the grade I thought, but sustained. Angle even more right from the large tree or even start below the tree to the right if you wish. Make a sweeping traverse out right almost intersecting the next route. Solid textured rock, good holds. Eight bolts to anchor. Best that the 2nd does the cleaning and lowers you.

(wall directly across the canyon-north facing)

Need a 60m rope to rappel the better routes. A dozen draws. You are over 6500’ and this canyon does not get all day sun. This canyon can be cooler than expected. This is grizzly country, two published attacks in this area during the past two years (2008). Also well documented daytime mountain lion kill of a large ram. Once you get away from the lake and the hiker trails, you are truly in the Canadian Rocky wilderness. Act accordingly in terms of gear and approach.