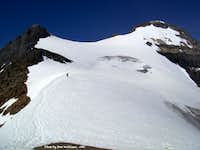 Mount Aberdeen (not to be confused with Mount Aberdeen, Queensland, Australia) and Haddo Peak combine as one of the most common alpine objectives in the Lake Louise realm of Banff National Park (Canada’s 1st National Park and the world’s 3rd). Banff is one of four connecting national parks making up the central Canadian Rockies. Mount Aberdeen was named after Scotland’s 3rd largest city in 1897 and was known as Hazel Peak prior to that time. It was first ascended in 1894 by Allen, Frissel and Wilcox making it one of the early ascents in the Canadian Rockies and the 2nd ascent of the alpine objectives surrounding Lake Louise. 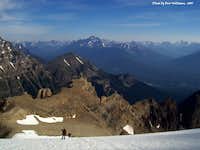 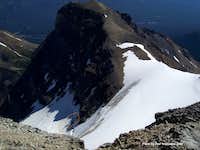 Mount Aberdeen’s northern glacier provides a classic introduction into ice climbing and therefore quite a few Alpine Club of Canada trips are planned on this route every summer. What used to be a snow climb for much of the summer is now mostly an ice climb due to glacier retreat.

Getting up the steep tongue (3 full pitches of ice) and crossing the bergshrund below the icefall while protecting the ground above are the two main cruxes of the route. Although it is possible to descend to the south into Paradise Valley (our choice of descents), the Paradise Valley Trail has been decommissioned and thus the bridges demolished over Paradise Creek making this part of the descent the 3rd crux of the journey if you chose to descend the southwest ridge of Aberdeen.

The three crossings required over Paradise Creek can be quite treacherous, particularly later in the day as ice and snowmelt increase the flow and volume. Your total accumulated ascent via the traditional route and bagging both Aberdeen and Haddo is 5200’+/-.

The north glacier route has six accident reports detailed at Alpine Accidents in Canada. Most of these occur on the first ice pitches to ascend the tongue. It is obvious via the logbook and trip reports that many parties do not take the time to ascend Haddo Peak, even though it requires very little extra effort.

The Trans-Canada dissects Banff National Park east to west as you come in from Calgary. Travel to the Lake Louise exit and turn left through town and follow this road 5 km to its end at the Lake Louise parking area. You should park at the “upper” parking lot to give you a few more feet head start. The Saddleback trail starts near the boathouse along the southern lakeshore and passes by all the parking areas.

Take the Saddleback Trail to the saddle between Saddle Peak and Fairview (3.7 km at 2200' gain). If you are running shuttle for the Paradise Valley exit, park a vehicle at the Paradise Trailhead off of Lake Moraine Road. However, this shuttle only saves you 2kms of extra hiking versus staying on the Moraine Lake Trail to Lake Louise.

You will be required to purchase a national park pass as you enter the park. This pass is good for all four national parks. If you plan many visits to Canadian National Parks within one year, you should purchase an annual pass. There are no permit requirements to climb in Banff National Park, but all camping is regulated. There is also a backcountry permit required if you plan on spending a night in the backcountry versus the town campsites. This can be obtained via the park's website which is included in the camping section below. Park headquarters are located in Banff and you will drive through the manned kiosks as you enter the park.

This is active grizzly country and thus why Paradise Trail has been officially decommissioned. Hike out the Paradise Trail at risk of Grizzly or Park penalty. This is one of the reasons many choose to descend the ascent route via V-Threads.

I climbed Mount Aberdeen in July. Earlier in the year, snow will make the ascent easier, but the transformation between snow cover and hard ice can be perilous making June normally a bad month to climb Aberdeen. The month of May can often result in too much post-holing during the approach. As of 2007, there are six published accident reports related to Mount Aberdeen, several relating to conditions.

The closest campsite would be back in town at the Lake Louise Campground. You can go online at Banff National Park to pick a campsite and obtain your camping permit. You will also be required to obtain your backcountry permit which is separate, but can be obtained simultaneously if you plan on camping at a backcountry site. The Lake Louise Alpine Center Hostel is a great place to eat and has been recently renovated, but is more expensive than your average hostel. Of course those with the big bucks can camp out at the Chateau itself. The Paradise Valley backcountry campsite is no longer in existence due to converting the area back to Grizzly habitat.