The Grand Sentinel is a 100+ meter obelisk quartzite rock tower on the back side (north) of Pinnacle Mountain in Banff National Park, one of four connecting national parks making up the central Canadian Rockies. The Grand Sentinel features two classic and popular routes, the four pitch Alpine II, 5.9 trad route up the South Face and the four pitch 5.10d sport route up Grand Sentinel’s southeast arête (Cardiac Arête). The South Face offers a 5.9 variation finish versus the 5.8 original route, and that is the route I climbed in June, 2006. Loose rock is an issue on the Grand Sentinel as, despite being quartzite, it gives the appearance it could crumble if you leaned on it in the right spot. We encountered several large loose blocks ourselves on the South Face.

The South Face route (Selected Alpine Climbs in the Canadian Rockies) on the Grand Sentinel involves 4 pitches of trad climbing with solid stations (2006) and one piton under a large roof over the third pitch. There are two finishes after the third pitch, a 5.4 loose pitch that traverses out left (west) and a much more aesthetic 5.9 direct pitch straight to the summit which utilizes small gear in flakes. The third pitch, 5.8, is a fun challenge following a wide crack to a short but well-ventilated roof problem. 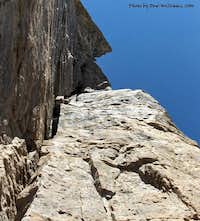 Cardiac Arête, 5.10d, (Sport Climbs in the Canadian Rockies) is a sustained 4 pitch sport route that runs right of the south face basically following the southeast corner of the Grand Sentinel which is the Mount Temple side. The climbing is sustained in the 5.9-5.10a range with 5.10d cruxes along the way. The route is not as loose as the south face, but rock fall is still an objectionable hazard en route. The lower part of Cardiac Arête gets late morning sun and the upper section early afternoon sun. This route is well protected at 8-12 bolts per pitch. Take plenty of draws and several long slings for a roof here and there.

Blocked in by Pinnacle Mountain to the south, the majority of your views are limited to the Paradise Valley region, including Mount Lefroy, Mount Temple and the backside of The Mitre, Mount Haddo and Mount Aberdeen. The “Valley of the Ten Peaks” views are magnificent on the Larch Valley Trail approach, particularly the north face routes of Mount Fay and Mount Deltaform’s Super Couloiur route.

The Trans-Canada dissects Banff National Park east to west as you come in from Calgary. Travel to the Lake Louise exit and turn left through town and follow this road 2.5 km to the Moraine Lake Road. Turn left and proceed to the parking area at the Moraine Lake Lodge (dead end).

This is active grizzly country, therefore, you should always have bear spray on your person during the non-hibernation periods. I advise checking with Parks Canada for any area and/or trail closures. THE LARCH VALLEY TRAIL USED TO ACCESS THE GRAND SENTINEL IS NORMALLY RESTRICTED DUE TO BEAR ACTIVITY.

I climbed the Grand Sentinel in late June and had to cross some steep snow slopes en route with trail runners, but the kick steps were easy. Hiking poles offer good assistance with this traverse since you can leave them at the base of the route with your shoes, etc. The snow is better than the scree, so I advise going this time of year. Despite its popularity, the Grand Sentinel is always loose, early or late season. It is a decaying structure of quartzite that will never improve in that area.

Due to bear closures and the resulting re-arrangement of the Paradise Valley campsite in 2006, the closest camp site would be back in town at the Lake Louise Campground. You can go on line at Banff National Park to pick a camp site and obtain your camping permit. You will also be required to obtain your backcountry permit which is separate, but can be obtained simultaneously if you plan on camping at a backcountry site like Paradise Valley. The Lake Louise Alpine Center Hostel is a great place to eat and has been recently renovated, but is more expensive than your average hostel. Of course those with the big bucks can camp out at the Moraine Lake Lodge itself which is at the start of your climb basically.