Pinnacle Mountain is the technical alpine climb (Alpine II, 5.5-5.6) located between the popular scramble of Mount Temple to the northeast and the smaller scramble of Eiffel Peak to the southwest in Banff National Park, one of four connecting national parks making up the central Canadian Rockies. Walter Wilcox named Pinnacle Mountain in 1894 due to the large pinnacles located to the north of Sentinel Pass. Pinnacle Mountain was actually originally named Sentinel Mountain. It was first ascended by Hickson, Feuz and Aemmer in 1909 and was considered quite the accomplishment for the period after three previous attempts failed. 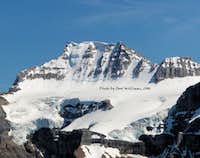 There are two Pinnacle Mountains in Canada, one in Quebec and this one of the Canadian Rockies. The hike up the Larch Valley Trail is popular among hikers, but this climb is rather obscure. We were the first to sign the old log book in 2006 (June) and the last entry was August of 2005. The lone published route is the Alpine II, 5.5-5.6 route up Pinnacle Mountain’s southwest ridge which only involves two pitches of technical climbing. An old hemp rope was installed on the 2nd technical pitch many years ago, and only a small remnant is left. To date, there have been no other routes of interest on Pinnacle and it makes little sense to attempt to ski the mountain. Unlike other routes in the Selected Alpine Climbs in the Canadian Rockies guide book, i.e. Mount Brock, I found this route quite accurate via the grade and description. One move on the second pitch up a cold damp chimney might venture into the 5.7 realm (modern rating) and is difficult to protect. Pinnacle Mountain is quite loose in spots, but this is the Canadian Rockies.

One would be hard pressed to find a better summit to take in more immediate 11,000’+ mountains in the Canadian Rockies, including Mount Deltaform, Mount Lefroy, Mount Temple, Mount Hungabee, Mount Victoria and even Mount Joffre and Mount Hector in the distance. The “Valley of the Ten Peaks” views are magnificent, particularly the north face routes of Mount Fay.

The Trans-Canada dissects Banff National Park east to west as you come in from Calgary. Travel to the Lake Louise exit and turn left through town and follow this road 2.5 km to the Moraine Lake Road. Turn left and proceed to the parking area at the Moraine Lake Lodge (dead end).

This is active grizzly country, therefore, you should always have bear spray on your person during the non-hibernation periods. I advise checking with Parks Canada for any area and/or trail closures. THE LARCH VALLEY TRAIL USED TO ACCESS PINNACLE MOUNTAIN IS NORMALLY RESTRICTED DUE TO BEAR ACTIVITY.

I climbed Pinnacle Mountain in late June and the route was in good shape. We were the first to sign the summit log in 2006, but I actually advise climbing this route early to take advantage of the compacted snow from left over avalanches to make the scree fest more endurable on ascent to the col. Ice could linger as late as June on both technical pitches. I could tell they had just cleared up of most ice when I made my ascent. Small amounts of snow and ice lingered here and there.

Due to bear closures and the resulting re-arrangement of the Paradise Valley campsite in 2006, the closest camp site would be back in town at the Lake Louise Campground. You can go on line at Banff National Park to pick a camp site and obtain your camping permit. You will also be required to obtain your backcountry permit which is separate, but can be obtained simultaneously if you plan on camping at a backcountry site like Paradise Valley. The Lake Louise Alpine Center Hostel is a great place to eat and has been recently renovated, but is more expensive than your average hostel. Of course those with the big bucks can camp out at the Moraine Lake Lodge itself which is at the start of your climb basically.