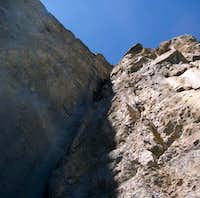 Mount Louis was officially named in 1886 after an early Canadian Rockies surveyor. It was first ascended in 1916 by MacCarthy and the infamous Canadian climber Conrad Kain.  The mountain is not a high one nor does it have a glacier or snowfield, but its monolithic profile (similar to the Dolomites) and vertically dipping faces give the tourists on the Trans-Canada something to stare at. The limestone of Mount Louis is Devonian. What makes Mount Louis more unique then its neighbors are the extreme steep cliffs which surround the peak from all angles. Mount Louis is one of a group of three peaks which are part of the Sawback Range (Edith and Fifi-yes, named after a dog). They are composed of rock layers which were originally horizontal but are now oriented vertically.

The rock is better for climbing than what is typical in the Canadian Rockies. Mount Louis is most striking in the winter when the surrounding mountains are covered with snow but its vertical cliffs remain bare, producing a dramatic contrast. Located just to the north of Banff, it comes into view for just a short period driving through Banff National Park westbound on the Trans-Canada Highway.

There are only challenging Alpine III rock routes on Mount Louis, ranging from the popular Kain Route at 5.7 to Kor-Fuller at 5.10d. The summit register reads like a who’s who of North American climbers and was still in place during my 2003 summit.

The Trans-Canada Highway dissects Banff National Park east to west as you come in from Calgary. Bypass the Banff town exits and take the Bow Valley Parkway exit. Follow the parkway for .3 km west to a road on your right, turn right and proceed to the Fireside Picnic area at the end of the road. 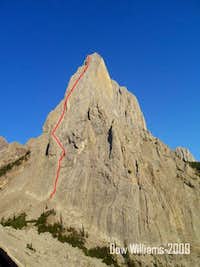 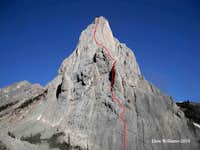 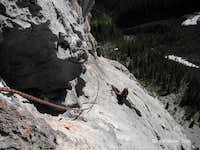 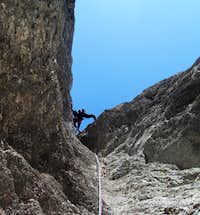 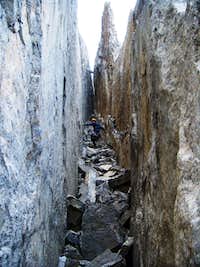 Homage to the Spider

Kain Route (Normal Route) III 5.6/7
A famous climb put up in a very casual manner while Kain was accompanying MacCarthy and some friends on a "day's picnic to view the scenery". It is now a very popular route to the top of one of the more striking mountains in the area. The hardest climbing is at the very end. If the weather breaks, downclimbing the route is reasonable for experienced parties. In fact, some parties actually use this as the descent route. It has been climbed in two hours but most parties take a little longer. The first ascent was done in 4 hours. However, don't underestimate this route: the number of bivi walls in the upper half of the climb attests to the number of parties who either overestimated their ability or underestimated the difficulty of the route.

Homage to the Spider III 5.10The guide book mentions there are approximately “7 pitches of steep climbing”, but like most descriptions in the Selected Alpine Climbs guidebook, is somewhat vague how they split up. We actually found the need for only six long pitches from the top of the initial scramble to the mystical “medieval alleyway” feature, which marked the end of our roped up climbing, with the summit still about 30 minutes away via low to mid 5th class scrambling. Dow

Gmoser Route III 5.8 The route I first climbed on this mountain. A very impressive ascent for its day and one of the best moderate alpine rock routes in the Banff area. The rock is typically clean and the standard is reasonably consistent (5.5-5.6) except for a steep corner system in the lower third. 5.7/8 climbers will find the crux a good challenge. It combines with the best climbing on the Kain Route and is a fitting approach to the Perren variation. Dow

Kor-Fuller III 5.10dRX Layton Kor and J. Fuller established the Kor-Fuller route in 1964 as an aid route and it was not freed until 21 years later by Sean Dougherty and company. Knowing Mount Louis fairly well from several other climbs on the mountain, finding the start of the route was not an issue. Actually being bold enough to climb the first pitch was. We scrambled several hundred feet of 4th or 5th class terrain up to the obvious corner start. What was not obvious at that point was the protection of the first pitch, there basically was none. I have climbed 5.10a without pro before, but this closed corner was about as chossy as Canadian Rockies limestone can get, with a complimentary solid ledge below it. My partner’s vote was to bail the route at this point and go climb Homage to the Spider. I knew how much more approach was involved to get that done not to mention Homage is not without its loose rock hazard as well. I had just completed Homage to the Spider last year and was not up to revisiting it so early. I suited up, took the sharp end and stemmed my way up the "crunchy” and unprotected first pitch of Kor-Fuller. Though the first pitch might have been the most dangerous of the day, the second pitch was no doubt the business of this route. Hard 5.10d moves over spacious pro in a unique water worn gully (dry waterfall) of sorts takes you to a third pitch that although eases in grade, is still quite run out. After those first three pitches, Kor-Fuller runs into the Greenwood/MacKay route on Mount Louis which is quite boring and loose until it melts into the classic Perren finish, which is a spectacular 5.7-8 60m pitch on great rock to just below the summit. Dow

Gargoyle III 5.10a Similar to Kor-Fuller, Gargoyle serves up approximately four decent pitches of sustained climbing before it ties into fast moving fifth class terrain that leads to the much more popular and easier routes on Mount Louis, Gmoser, Greenwood/MacKay and/or Kain. The first pitch involves 80m, thus a little simul-climbing, on real solid sticky limestone that sets you up for a short 5.8 pitch which leads to under a large yellow and chossy roof. The third pitch is the crux of the climb, following a hand rail out left from this roof to break out onto 5.8 run-out terrain above. The route keeps traversing left until below an easy 5th class corner that runs for almost 100m. At the top of this corner awaits a scramble through a chamber type chimney which leads to the eastern ridge of Mount Louis. A continued westward traverse lands you into the Kain route. We free soloed at the end of the 4th pitch, onto the Kain route and continued sans rope until we got to the Perren finish which involves two beautiful pitches of 5.7 crack climbing to reach the summit ridge. I gave the route 14 pitches in the description but you can free solo most of it if you are at a certain competency level. We did car to car in 11 hours at a casual pace (read= stuck behind guides in training screwing up on Perren). If one roped up for all the ground on this route, it would take much longer to complete. Dow

Greenwood/MacKay III 5.7
Excellent for the grade; the position on the upper rib is superb. The lower gully section should be climbed as quickly as possible - it's a haven for falling rocks, though safer possibilities do exist.

You will be required to purchase a national park pass as you enter the park. This pass is good for all four national parks. If you plan many visits to Canadian National Parks within one year, you should purchase an annual pass. There are no permit requirements to climb in Banff National Park, but all camping is regulated. There is also a backcountry permit required if you plan on spending a night in the backcountry versus the town campsites. This can be obtained via the parks website which is included in the camping section below. Park headquarters are located in Banff and you will drive through the manned kiosks as you enter the park.

This is active grizzly country, therefore, you should always have bear spray on your person.

Mount Louis is alpine rock, so dry conditions are required. Being in the Bow Valley Corridor, dry conditions are possible almost anytime, but normally the best chance for success lies in June through September. Daylight hours are also something to consider before setting out. Lightning is a real issue on Louis. Not only is it conducive via its shape, but there is a steel cross on the summit as well.

You can go on line at Banff National Park to pick your camp site and obtain your camping permit. The closest camping is back in the town site of Banff, or if you want to avoid the hustle and bustle, you can camp further down the Bow Valley Parkway at , Johnston Canyon Resort and Campground .