C-Hill is a popular summit just northwest of downtown Carson City, Nevada. C-Hill is so named for the "C" representing Carson City located on its east facing slope.

C-Hill does a good job representing the capital city of Nevada. While not high by any means, C-Hill is surprisingly scenic. It offers a pleasant desert landscape, with views to the Sierra Nevada Mountains directly to the west, and views to the desert peaks of the east. In addition, there are numerous opportunities for scrambling due to the plethora of boulders at the summit. 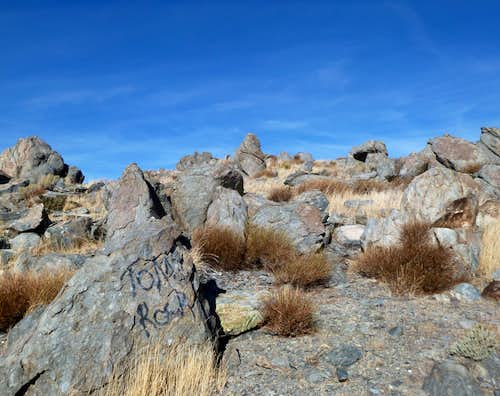 View to the rocky summit 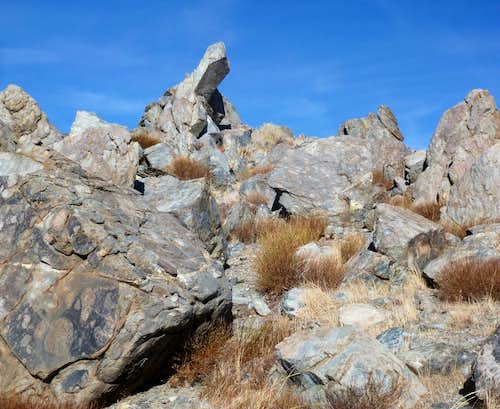 Finger-like rock below the summit

Being so close to downtown, C-Hill is quite accessible. It has a little over 300’ of prominence making it a legitimate summit.

Although C-Hill can be hiked all year, hiking is not recommended during the summer months due to extreme heat and the potential to run into rattlesnakes. Try and hike in dry conditions, as mud accumulates after a rain storm, making the trail slippery. Mid-to-late fall is probably the best time to hike C-Hill (October-November).

There are multiple ways to hike up C-Hill and numerous details could be provided for these routes. However, this page will focus on the two most direct routes, both of which are designated specifically for hikers of C-Hill.

Walk a little under 300 yards up the dirt road and there is a trail leading up the east slope of C-Hill. It connects to a larger trail that leads to the "C" as well as to the summit. This last part is very steep. 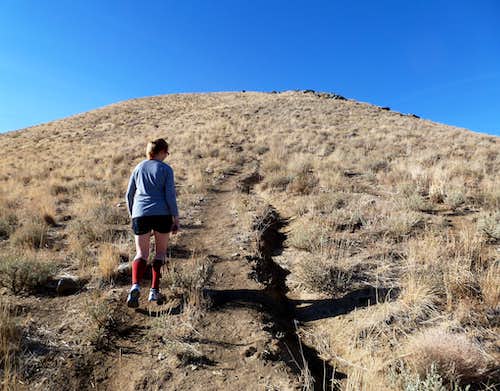 Heading up the final steep slope to the summit

There is a sign noting the side trail off of the last stretch leading to the flag, which is just above the “C”. A little further past this turn off is the sub-summit of C-Hill. The true summit is actually a summit bump just to the west. It doesn’t appear too much higher than the sub-summit, but it is actually higher by about 20’.

The summit is just about 1 mile distance from the trailhead, with an elevation gain of a little over 1,000’. Short and steep.

Route #2 – The loop
A more scenic and enjoyable route is a loop route starting from the north side. Pass Carson Middle School heading west on King Street and continue for a little under ½ mile. Thames Lane is on the right, and Canterbury Lane is on the left. Take a left on Canterbury and drive shortly to the circle at the end.

Take the dirt road, and quickly loop around to the left. Continue left (east) until you see a trail on the right (about 1/4 mile from the parking area). This is the trail to the summit. 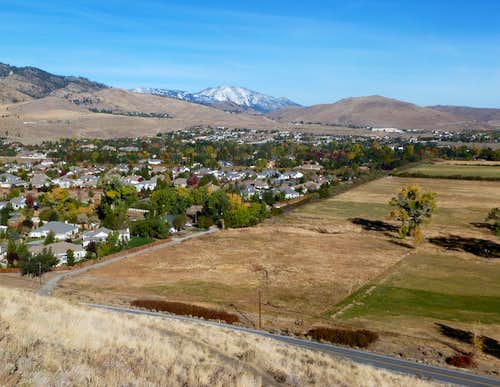 View from the trail north towards Slide Mountain 9,698'

The summit is reached in about 1.1 miles and 935’ of elevation gain. Once at the summit, head back down to the obvious small road just below the summit. This curves around the summit and dead ends. Hike down the steep slope heading west. Eventually you will hit a road that will loop back down to the north side of the road.

In total this is a 3 ½ mile loop. Over 1,000’ total elevation is gained with some ups and downs on the back side. 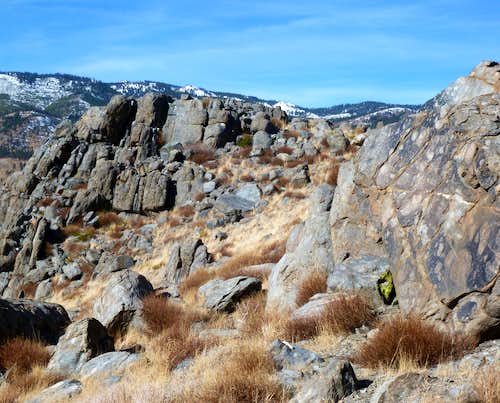 View heading down the back side of C-Hill

There are no restrictions for the parking areas mentioned.