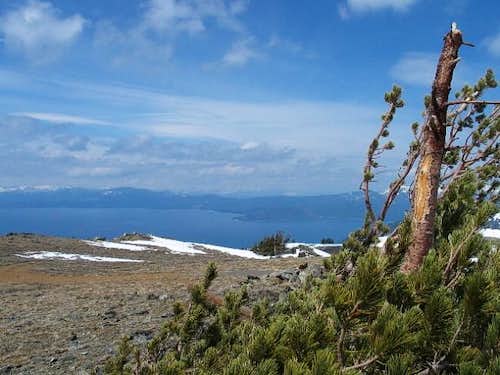 Snow Valley Peak is one of the most popular hiking destinations in the Lake Tahoe Basin.  Easily accessible from Carson City and viewed from many a vantage point, views are just one of the rewards of hiking this peak.

Snow Valley Peak has the distinction of being the highest point in Carson City County, a unique county in that it is not part of any county; instead, it is an independent city (the capital of Nevada). It used to be part of the old Ormsby County, which slowly lost area as new counties were formed from its territory in the early part of the 20th century.

The county nomenclature was dissolved in 1969 when it was little more than just some land surrounding Carson City. At that time all services were absorbed into that of Carson City. For county high-pointing purposes, Carson City is treated as a county-like division. Hopefully, that was clear, but in Nevada, Snow Valley Peak is the highest point in Carson City.

Snow Valley Peak is a key peak for those who are chasing the county highpoints of Nevada. It isn't a difficult peak to summit, as it is an easy hike the entire way. SP'er Spence did this panoramic shot from the summit of Snow Valley Peak. You can see why it is worth the effort to get to the top.

Snow Valley Peak has two summits; the second not prominent, but clearly dominant.  This is Snow Valley Peak-East Peak, and it sits at 9,170'.  It has an excellent view to the east. 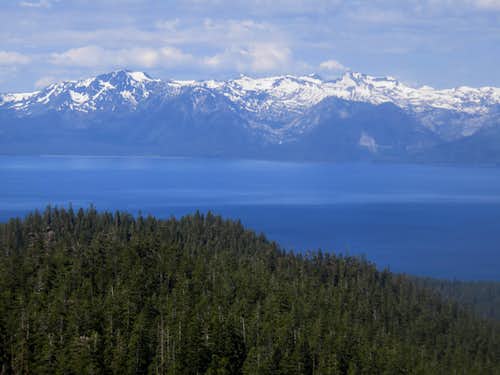 Desolation Wilderness from near the summit of Snow Valley Peak

Spooner Lake State Park offers another route up North Canyon from its parking area. See more info under the North Canyon via Spooner Lake route description.  North Canyon is a popular destination for mountain bikers.  The road goes to Marlette Lake and the Flume Trail. 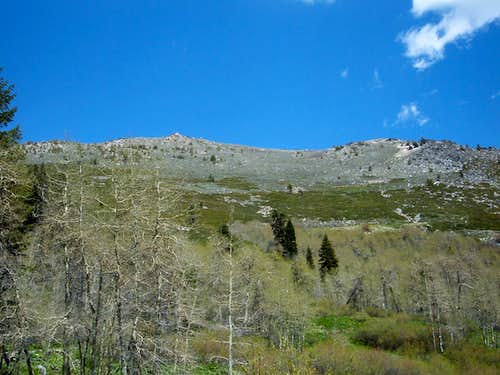 No permit is needed to park at the Tahoe Rim Trail parking area but there is a fee $6 a car to park at the Spooner Lake entrance of the Lake Tahoe Nevada State Park. Sometimes during early season after the Spooner Lake XC ski area closes down, there is no one manning the fee booth and parking is free. This is similar for several Lake Tahoe destinations, including Sand Harbor.  This typically occurs in April.

When To Climb or Ski

Snow Valley Peak is an all season destination. You may use snowshoes or skis in the winter / spring or hike the Tahoe Rim Trail to access the summit after the snow is gone.

For a good overview of the Spooner Lake area and the XC skiing available, click on this link to bring up some excellent information as well as a map that will orient you nicely to Snow Valley Peak's relationship to Spooner Lake.

Cabins are available at Spooner Lake and lodging is available in So. Lake Tahoe or Carson City. Camping is also to be found at some of the state parks listed HERE.

Since the weather link below to time/temperature is down a lot lately, click HERE for the weather report of Incline Village, the closest town to Snow Valley Peak.

Carson City as a County

There is a reason why Carson City is considered a county.

Wikipedia has some information about it here:

"The Consolidated Municipality of Carson City is the capital of the State of Nevada. A 2005 population estimates places its population at 57,104. [1]. Carson City is now an independent city, not part of any county, and is its own Metropolitan Statistical Area. Like many towns in Nevada, Carson City was founded in the boom days of mining. A center of silver mining, Carson City was the county seat of the former Ormsby County and was named for explorer Kit Carson.

Carson City has the distinction of being the smallest of the 361 Metropolitan Statistical Areas as designated by the United States Census Bureau (as of July 1, 2004).

"The habitat of the Eastern Sierra must have been a welcome refuge for explorers Kit Carson and John C. Fremont as they rode into Eagle Valley during their quest to map the West in the 1840s.

To the east, long stretches of desert mark the difficult terrain settlers had to endure to get here. To the west, the Sierra Nevada stretches out as a gateway to the Pacific.

During that time, Northern Nevada saw its first wave of white settlers. The Bidwell-Bartleson party is believed to have made their way through the area in 1841. Westbound traffic increased, spurred by the big boom of 1848-1849 when the discovery of California gold ignited the frontier spirit and transformed Eagle Valley.

By 1851, Eagle Station, a trading post and small ranch on the Carson Branch of the California Emigrant Trail, served as a stopover for travel-weary gold prospectors.

According to historical accounts, the station and surrounding valley took their names from an eagle shot by Frank Hall with his ball-and-cap Colt and mounted on the trading post wall. Frank, brother W.L. Hall and George Jollenshee ran the ranch, located at the current site of Fifth and Thompson streets.

In 1858, Abraham Curry bought Eagle Station when he found lots in Genoa, Nevada to be too expensive. Carson City's future designation as a capital was largely the fruit of Curry's labor. He left a ten-acre plaza in the city center for his predicted location of the state capitol as he laid plans for the city's future.

In 1859, gold prospectors hit silver in the hills east of Carson City. The Comstock Lode, as it was called, was the largest silver find in world history. Tens of thousands of miners poured into Carson City and neighboring Virginia City.

In the 1860s, Carson City was a station for the Pony Express and the overland mail under the Chorpenning, Butterfield, and Wells Fargo companies. In 1861, true to Curry's prediction, and largely because of his shrewd maneuvers, Carson City became the capital of the Nevada Territory.

Despite its small population and expansive territory (Nevada is the seventh-largest state), statehood was inevitable. War was brewing in the east, and Nevada's wealth, as well as its congressional votes, would prove vital to the Union war effort. Nevada was granted statehood on October 31, 1864. Each year Nevada's "Battle Born" roots are celebrated in Carson City with the Nevada Day parade.

Prosperity continued when the Big Bonanza, another major silver strike, was discovered in 1873."