Incline Peak has some of the best views of Lake Tahoe of any of the named summits in the Mount Rose Wilderness.  It is quite accessible which makes it a very popular destination.

Incline Peak itself is not prominent.  It only has about 200' of prominence above the saddle it shares with Peak 9773.  However, because it juts out from the other peaks in the area, its views are quite superior, because not much is blocking the view of Lake Tahoe.

Incline Peak can be hiked all year.  People often snowshoe it in the winter time.  If you want an easier time, the best time to hike here is probably June through October when the Tahoe Rim Trail is mostly free of snow, or completely free of snow. In a wet year, June might have too much snow, and there is a greater risk of losing the trail and then getting lost in the woods. It has happened to me twice - both times on the descent - both times due to snow. You need to be very aware of where you are going, as there are trails in multiple directions in the vicinity of Incline Lake, that can easily cause confusion.  I actually prefer August/September to hike Incline Peak, especially around sunset.

The most straightforward way is to head about 1 1/2 miles past Mount Rose Summit to the edge of the Tahoe Meadows. On the right side of the road is a dirt road and parking area. This is Incline Lake Road. A gate blocks automobile access. Park anywhere around here.

If you want a little longer trail all the way up, head about 3 miles past Mount Rose Summit going towards Incline Village. Pass the phone booth on the right hand side of the road, and look for a dirt road on the right, about a mile past it. Head down the road, which terminates after a couple hundred yards. Park here, and look for the trail below. It is unmarked, but is right by the end of the road on the right hand side. The greatest challenge is finding the trail, but it goes right up the woods along the north side of a creek.

Finally, to reach the Incline Village approach, head further down 431 past Country Club Road and head north on Marlette Way which quickly turns into Jennifer Street and reaches the trailhead in two-thirds of a mile.

Route #1 – Incline Lake Road
Just across from the edge of Tahoe Meadows is Incline Lake Road. It is a fire road closed to motor vehicles, so you must park at the beginning of the road at about 8575’. Follow the road as it descends for about 1/2 mile. When the road loops around there is a cairn marking a trail. Take the trail which descends and connects to a trail heading north towards the peaks. The trail is confusing at times, especially when there is snow. You run into the connector trail described in route #2. Continue up the trail as it heads around the north side of Incline Peak. After about 1 1/4 miles up from the beginning of the trail the ridge is reached at about 9365’. The spires below Peak 9773 are just above you.  Incline Peak is just behind you.  Head up towards Incline Peak and you will quickly find the use trail that leads to the summit.  The summit is reached in about a third of a mile from the pass at the ridge.  This route is about 2.1 miles one way to the summit, gaining 1,100'. 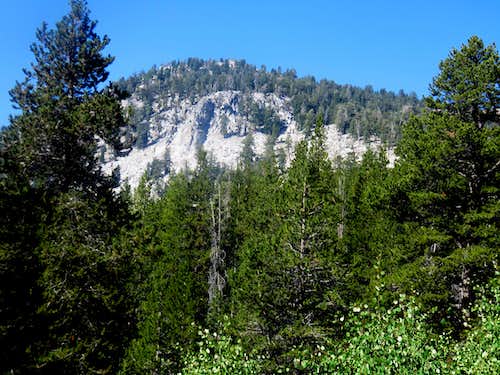 Incline Peak from the trail

Route #2 – Connector Trail
This route starts off a dirt road 3 miles past Mount Rose Summit heading towards Incline Village. Finding the trail is the most difficult thing to do. It actually goes right up to the road, but isn’t perfectly obvious. Use your best judgment. It crosses a creek with a big piece of flat wood, and then skirts the base of Incline Peak. The dirt road is at about 8200’. The trail will climb up through the forest to the main ridge between Peak 9773 and Incline Peak in about 2 miles, gaining about 1,265 feet in the process. Once at the ridge, you will see the spires below Peak 9773. Follow the same route described above to Incline Peak.

The one way distance to Incline Peak from here is about 2.35 miles and about 1,475 feet.

Route #3 - Jennifer Street - Incline Village
This is a longer, steeper route.  From the trailhead at about 7,438’ take the trail steeply up over 2,000 feet, in less than 2 miles to the Tahoe Rim Trail. Take the Tahoe Rim Trail to the saddle between it and Peak 9,773.  It is about 3 1/4 miles one way with an elevation gain of 2,300' to Incline Peak.  Although most people will add Rose Knob Peak and Peak 9773, which adds another mile or so round trip.

There are no permits needed to hike up any of the routes described above. However, stay on the main trails, since there is some private land around them.