Peak 9225, also called Jessie's Peak as well as Chickadee Ridge, has become an increasingly popular hiking area in the Lake Tahoe Basin. It rises above Tahoe Meadows, a marshy meadow located southwest of Mount Rose. It has a prominence of over 750 feet, tucked away, surrounded by higher neighbors to the north. But its location above Tahoe Meadows makes it a very popular snowshoeing area during winter months. 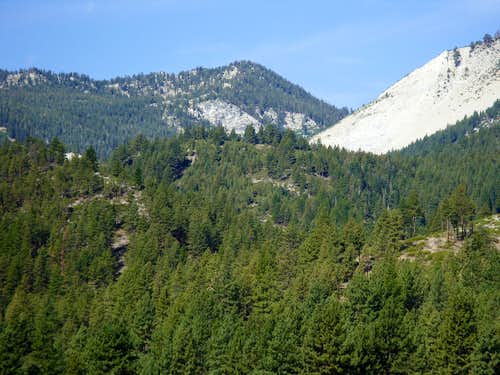 Known locally as Jessie's Peak and the Chickadee Ridge, it is accessed on the south side of the Mount Rose Highway (Hwy 431) from the Tahoe Meadows. Tahoe Meadows has ample parking areas to access the ridge.  On a weekend, any time of year, expect to see dozens of cars parked along the side of the road. Various trails head up to base of the peak from Tahoe Meadows, including the Ophir Creek Trail and the Tahoe Rim Trail.

Views from the ridge and the summit area are excellent, with an open view of most of Lake Tahoe and the mountains to the west of the lake. While the hike is pretty short, a longer hike can be had if you follow the Ophir Creek Trail or the Tahoe Rim Trail, both accessed along the way. Thus, Jessie's Peak can just be part of a longer hike in the area. 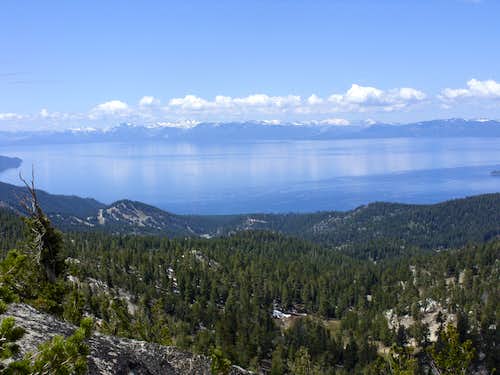 Lake Tahoe from the summit

Chickadee Ridge tends to get a lot of snow, and because it located just south of a marshy meadow, hiking up the snow in late spring can be a real pain. The best time to snowshoe the mountain is probably December through March. The best time to hike snow-free is between late June through mid-November. Avoid the hottest days of the year when even this peak can see temperatures well into the 80s.

There are two areas to park to start the hike. The first is in the center of the meadow. This is about 1 mile past the Mount Rose Summit on the south side of the road. There is a sign that says “Area Behind This Sign CLOSED TO MOTOR VEHICLES Year Round” and a small dirt parking area suitable for several cars. The elevation here is 8605’. Just behind the sign is a trail through the meadow. 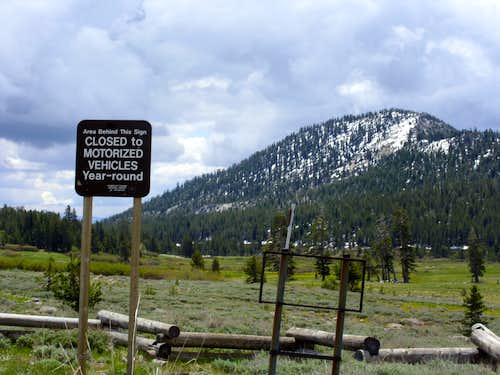 Peak 9225 from the first trailhead

The second starts at the western edge of the meadow, about three-tenths of a mile further down the road. The elevation here is about 8555’.

Snowshoeing in winter is fairly self-explanatory. Just head directly for the ridge.

During the summer and fall, however, there are more attractive routes that avoid the marsh.

There are three primary routes to the summit during this time. The first two involve heading straight up the north side of the mountain, from the Tahoe Meadows. The third option is via the Tahoe Rim Trail and up the south side of the mountain. The first two routes both come together at roughly the same point. All three routes can be accessed from either parking area.

Route 1: North Side - The Boardwalk through the Meadow
Both parking areas have trails heading west up the meadow towards a boardwalk. Early along the boardwalk is a sign pointing to the Tahoe Rim Trail and the Ophir Creek Trail. For this route, ignore the sign, and stay on the boardwalk. The boardwalk continues west through the marshy meadow for another quarter mile or so. At the end of the boardwalk, a dirt trail continues south towards Peak 9225. Continue along the trail and follow it as it turns east and skirts along the base of the mountain. At this point you can leave the trail at any point and head straight up the mountain. There is no trail, but the forest is pretty open. Continue up the relatively steep slope. Try not to head too far east, because the mountain slopes downward in that direction. It takes about 15-20 minutes once you leave the trail to reach the summit ridge. Once atop the summit ridge, the elevation is a between 8950 and 8980 feet depending on which route you take through the forest. Head east along the summit ridge for a little more than ¼ mile. Soon you will reach the base of the summit block. It is about 290 feet up from here. Reaching the summit requires scrambling over large boulders. Once on top, there are plenty of good places to sit and enjoy the view. 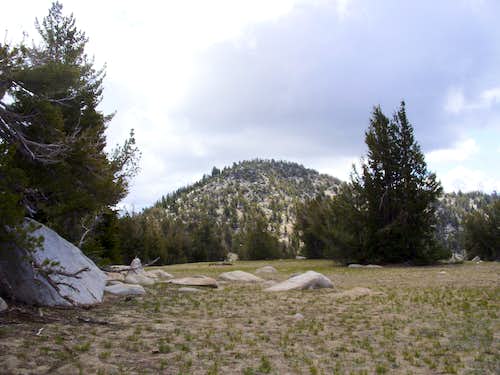 For both the north side routes, the round trip hiking distance is about 3.5 miles, with a one-way elevation gain of about 750 feet. 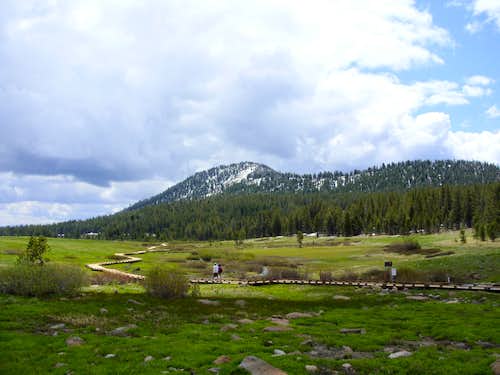 Peak 9225 from the near the start of the trail through the Tahoe Meadow.

Route 3: South Side - Tahoe Rim Trail
From either parking area, head up to the boardwalk and follow signs to the Tahoe Rim Trail. Then take the Tahoe Rim Trail heading south for about 1.5 miles once you leave the meadow and enter the forest. The trail turns east around the south side of Peak 9225. At any point along this stretch, simply head up to the summit ridge and follow it to the base of the summit block. This route is about 4.5 miles round trip with a one-way elevation gain of about 700 feet.

There are no permits needed to hike in the Tahoe Meadows. When the pass gets heavy snow, roads may be closed. Roads may also be closed during the summer due to fire danger. Parking at the trailhead is free.