Genoa Peak is located in the Toiyabe National Forest, in the mountains directly east of Lake Tahoe. It is the highest point between Spooner Summit and Kingsbury Grade.

It is accessible off the Tahoe Rim Trail (TRT) via an easy walk and is a popular summit in late spring/summer/early fall. Since it is located on the east side of Lake Tahoe it typically gets much less precipitation than its neighbors on the west side of lake. However, snow can remain on the trail well into June on a wet year (like 2010, 2011).

Although the summit has electrical equipment on top, views are still exquisite. Lake Tahoe and the Desolation Wilderness to the west, the Pine Nuts and other desert peaks to the east, the Sierra Nevada to the South, and plenty more to see to the north. It is an all encompassing view. 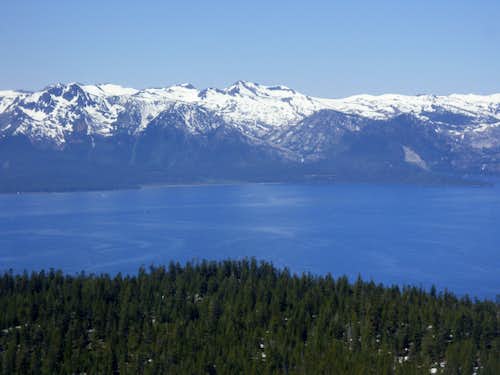 View west across Lake Tahoe from Genoa Peak to the Desolation Wilderness. Dicks Peak 9,974' in the center. Taken July 2, 2011.

Genoa Peak can be hiked during most of the year, and is a good place to snowshoe in winter. The best months to hike are between May and November. However, the best time is probably in June/July when much of the snow has melted.

There are two primary trailheads for Genoa Peak: Spooner Summit and Kingsbury Grade North. There may be other alternatives worth covering from the west from Lake Tahoe or from the east from the Carson Valley. There is a route from the valley to the east off Jacks Valley Road called the Sierra Trail, but it is very steep and considerably less scenic.

Spooner Summit
If you are coming from the Reno, you need to take 395 South to U.S. Highway 50 West to Spooner Summit. 395 South was recently expanded to avoid downtown Carson City. Drive to the Fairview exit and head west back to Carson Street (also 395 South). About ½ mile further is US 50 West. Follow this for about 9 miles to Spooner Summit. Spooner Summit is a trailhead, with parking on both sides of U.S. Highway 50. For Genoa Peak, the parking area is on the south side of Highway 50. There are parking spaces on the side of the highway, with additional spaces below, closer to the trailhead. The elevation here is 7150 feet.

Kingsbury Grade North
Continue south past the US Highway 50 West junction for about 1.3 miles to NV-206 South (Jacks Valley Road). Continue as it heads towards the foothills just below Genoa Peak to the small historic community of Genoa, Nevada. Continue through Genoa (slow down to avoid the speed trap) and continue on for another 5 ½ miles to the entrance to NV-207 – the Kingsbury Grade Road, which heads uphill over the Daggett Pass 7334’ (about 8 miles from the junction with NV 206). A little less than ½ mile past Daggett Pass, take a right onto North Benjamin Drive and continue up the road as it turns into Andria Drive, which turns into Genoa Peak Road. From the turn off from NV-207 onto North Benjamin Drive, it is about 2 miles to the Tahoe Rim trailhead at 7780 feet. Park near the trailhead and continue up to Genoa Peak Road.

You can shuttle between the two and head up Genoa Peak on the way, which is a little over 10 miles if taking Genoa Peak Road instead of the TRT.

The well maintained trail winds up for about two miles where it crosses a dirt road. Follow the dirt road for a little over a mile as it crosses the Tahoe Rim Trail again. This is Genoa Peak Road. Follow it and then cross over South Camp Peak to cut the distance and head back down to the road towards Genoa Peak. The total distance to the summit is about 5 1/2 miles, with an elevation gain of about 2400 feet.

While the trailhead for the Tahoe Rim Trail is the attractive place to start, it is not the primary route to the summit. Genoa Peak Road heads about 3 3/4 miles with some ups and downs. After a short descent, the road intersects with FS Road 14N33. Don't take this road. Instead, follow a road just past it on your right that heads up to Genoa Peak in about ¾ mile. The total distance to the summit is about 4 1/2 miles with an elevation gain of about 1,850 feet.  You can descend the way you came, or head down the north side at a junction near the top, and then go back to where you came, which adds about 1 mile.

Genoa Peak Road is almost 2 miles shorter than the Tahoe Rim Trail route. However, if you want a loop hike (TRT up, Genoa Peak Road down) it is about 10 1/2 miles round trip.

Parking is free and most of the land is publicly managed by the U.S. Forest Service. There are small parcels of private land within the National Forest, mostly around Genoa Peak Road. There aren't any issues as long as you heed any signs denoting the private land.

There are no permits needed to hike on the Tahoe Rim Trail or any fee to park at either trailhead. When the pass gets heavy snows, roads may be closed. Roads may also be closed during the summer due to fire danger.

During the summer, bikers are frequent on the Tahoe Rim Trail. While some sections of the TRT are closed to mountain biking entirely or on certain days, mountain biking is permitted on this entire section of trail between Spooner Summit and Kingsbury Grade. Biking is allowed on Genoa Peak Road.