Capu Biancu (Capo Bianco) is perhaps the most accessible of the eastern satellites of Monte Cinto. Whereas the ridges to the west of Monte Cinto are very ragged ("Grande Barriere"), to the eastern side the ridgeline runs out smoothly. Nevertheless the summits here belong to the highest on the island.


The chain of summits divides the valleys of Asco to the north and Niolo to the south.

So access is possible either from Asco (parking near the Pont Genois) through Pinara Valley or from the Niolo side, e.g. from the little village of Corscia. I will focus on the latter, as the route from here is somewhat straighter and there is a gite d'etape in the village (Sentier du Transhumance).
So first one is to travel from the seaside of the island to its center at Francardu (via N193, N200 or N197). Here the D84 begins (direction Calacuccia, Albertacce). After curving through the "Scala Santa Regina" canyon one easily misses the junction for Corscia, but after the town of Cuccia there is a second opportunity to turn right to Corscia. From Calvi or Bastia it is a good one and a half hour drive to the trailhead.
Drive upwards to the (visible) church and parc there.

From the church of Corscia walk westwards a hundred meters and then turn right, following the road uphill for another 200m. Here, soon after the sharp bend leave the road to the left side (again upwards) and follow the orange marks. Follow this faint, but well marked trail for about an hour to the source "Funtana di Callaiola". Shortly afterwards, Capu Verdatu and Capu Bianco come into sight: 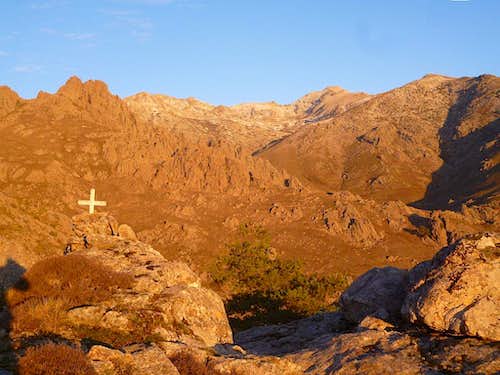 The path now flattens out and contours the hillside for about half an hour to the Bergerie Caracuto. Do not cross the bridge but stay on the western side of the little valley and walk upwards on a cairned path. Having passed also the Bergerie Urcola, at 1780m altitude cross the Ruisseau de Ruda to the eastern side and again follow the cairns in north-western direction. The lake of Occihi Neri is reached in little more than another two hours from the Bergerie. The mountain in the background is Capu Verdatu. 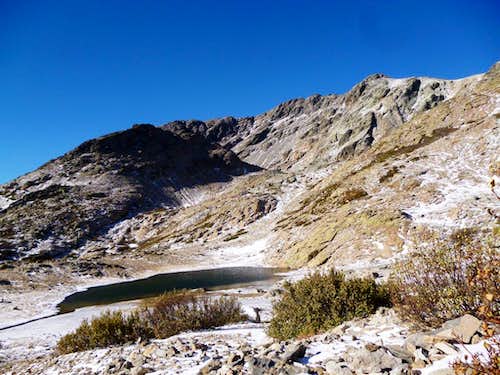 Here the cairns and tracks end; turn right into north-eastern direction and aim for the shoulder of Capu Ranziu. The scree flattens out to the top of the arrete, which roughly guides one to the summit of Capu Biancu. 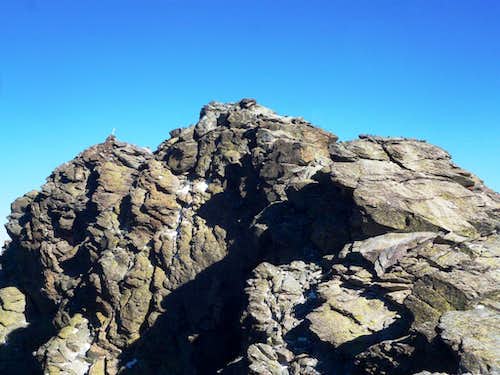 The last rocks of the foresummit are circumvented to the right (cairns) and only the last few meters offer some easy scrambling. One hour from the lake, about five hours alltogether.
The descent takes not much less time, so an early start is recommended.

Most time of the year. The neighboring Capu a u Verdatu seems to be a popular ski-touring destination.

c.f. Monte Cinto. Gite d'etape in Corscia and in Asco (northern side) as well.