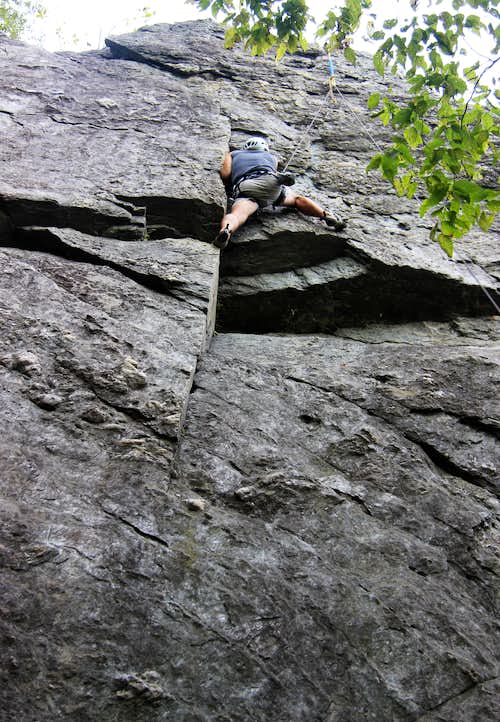 Pulling the Overhang on Fingernail (5.10b)
When I originally posted this page in 2007, I had very little experience on a rope, and almost all of my Class 5 climbing had been free soloing easy routes. Now I have reconstructed it from a climber's perspective, not a scrambler's.
Carderock is probably the most popular climbing spot in the Washington, D.C. area. Fast access from the nearest highway and even faster access from the parking area, plus dozens of clean, well-established routes of all types and difficulty levels (up to 5.13b), make it so. In addition to all that, the spot is popular with climbing classes and outings for companies, clubs, and school and church groups. Better climbing on more crags with longer routes and smaller crowds can be found a short drive away on the Virginia side of Great Falls, but Carderock endures as the region's favorite climbing destination and is still a nice place to climb. Just don't be surprised if you show up on a nice afternoon and find that all the best routes already have ropes on them.

The cliffs here get up to 60' in height, but most climbs are in the 40-50' range. Despite that and the fact that Carderock is primarily a toproping area, the climbing is not easy for its type (single-pitch leads and topropes). Schist is the predominant rock type here, and it is slick. Although there are several cracks and corners, the majority of the routes are face climbs. And when you also consider that the popularity of the area results in the holds, especially the starting ones, getting a bit smoother each year and that many routes were rated before YDS expanded beyond 5.9, you begin to see why the area has a reputation among many climbers for sandbag ratings. Most of the ratings have been corrected, but if you climb here, you still may find yourself thinking the route is at least a grade harder than its rating, even on a toprope. "Carderock 5.7" is often said with a wink, and just about every Carderock Route from 5.0 and even into the 10s feels one or two grades harder to most people used to climbing elsewhere.
Further complicating climbing here is that the ground features a lot of loose dirt and sand. Keeping shoes clean can thus be a problem, and many people bring a carpet swatch or a tarp with them.

Carderock is a year-round crag; even winter afternoons can be nice since the cliffs face southwest and can warm up nicely throughout the day. Fall is the nicest time to climb, and summer is probably the least pleasant (after cold winter days); the summer humidity makes both the rock and climbers slippery.
The Crags

A Class 3 gully (often used to access the crags) splits the two main crags and thereby defines them. Jungle Cliff, the northern crag, turns into a diminishing rock pile at its northern end. Hades Heights, for climbing purposes, runs south to where the Potomac River meets the cliffs, but the rock actually continues beyond that point for a short distance, and there are a few routes that now typically can only be reached via rappel or by a sketchy traverse over the water.

Combined, Jungle Cliff and Hades Heights have more than 60 routes in an area whose length you can walk in about five minutes (another reason the spot can seem so crowded).
Jungle Cliff is farther back from the river and thus less likely to have water at the base if the river is high. One notable disadvantage is that the routes tend to be shorter; many are only 25'.
Hades Heights, in addition to having taller cliffs, gets more sun. This is great in the winter but not so great in the summer. Having less shade, though, Hades Heights dries out faster after a rain, and the routes themselves feel drier in general, though there are some routes with starts that are crazy-smooth. 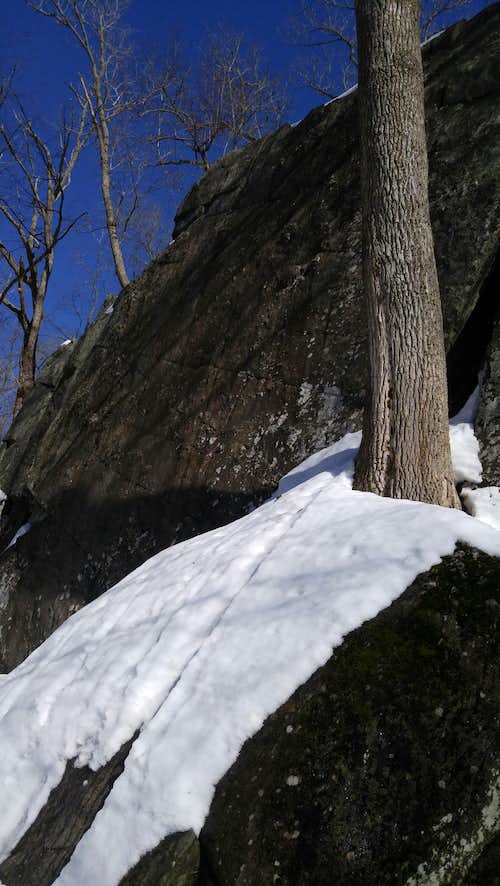 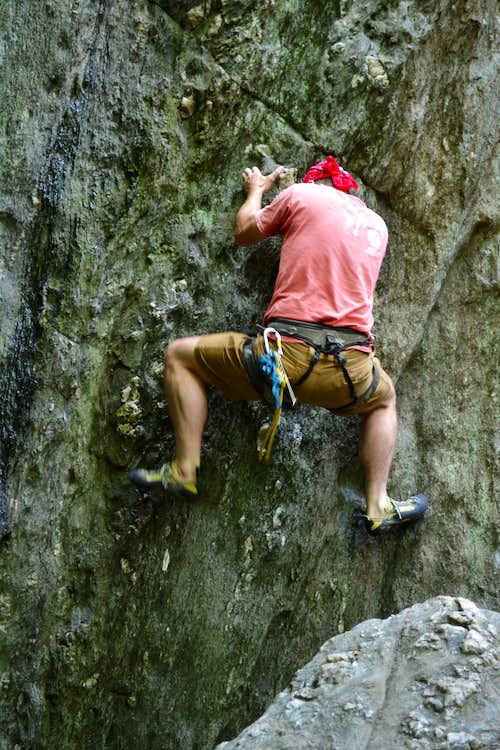 Tea and Scrumpet traverse
Carderock has a storied history, as it was one of the first Eastern crags to be developed, and many of the pioneer climbers there bore names that have gone down into legend. Perhaps most significant among them were Herb and Jan Conn, who made many first ascents here, in the Northeast, and at the fabled Seneca Rocks in West Virginia before moving west. Their names live on at Carderock and Seneca and many other places. Carderock alone has Herbie's Horror, the country's first 5.9 and thus once the country's hardest climb, and Jan's Face, a long wall with variations from 5.3 (not really a 5.3!) to 5.11d.
The Conns and their contemporaries climbed in the days of hemp ropes and boots, making ascents that today must be far easier given the advances in gear. For example, anyone solid at 5.9 and wearing nice new climbing shoes probably will not find Herbie's Horror that difficult, but imagine it in boots!
Climbing Styles

First, there is no sport climbing here. A few old bolts remain on a couple lines, but you would be crazy to trust them. Local ethics (and regulations) prohibit bolting. On several routes, you can see where bolts were chopped.
Trad-- Trad at Carderock and Great Falls is a contentious issue. Carderock really does not have many leadable lines (I will cover some in the next section), though Great Falls does. Rock quality is the issue. For the most part, the rock out here is clean and solid (though on some routes you may grab a flake and find yourself terrified when it moves), but often slick. But it is a schist that has been known to do one of two things under great force, i.e. the type exerted by a fall, especially on a cam: simply break, or grind small crystals just enough to create a fine powder that causes a piece of pro (again, especially a cam) to skate out. A notorious example was the time someone on the Virginia side was leading the classic, very pumpy 5.9 Armbuster. Near the topout, he fell, his gear failed, and he decked, injuring himself so badly that he gave up climbing.
Nevertheless, there are still some good leads at Carderock, but play it safe and use passive pro. Better for your follower to curse and fiddle with the nut tool than for you to fall and die. Before I read up on this subject, I had used cams plenty of times in this area but luckily had never fallen on one. After reading up on it, I switched to passive. I have fallen three times on passive pro out here, twice at Carderock and once at Great Falls, and the pro, stoppers in all three cases, held.
For more on the subject of leading at Carderock and Great Falls, check out this great post that I found. You can also find some back-and-forth arguments in the forums at Mountain Project.
Toproping-- This is what just about everyone does here. The numerous trees and boulders make it quick and easy to set up anchors.
Bouldering-- Plenty of opportunities here. The local guidebook describes several problems. It's also common to see people out just working the opening moves of various climbs. In fact, I bought a crash pad for just that purpose.
Traversing-- Traverses at Carderock are quite popular; don't be surprised to be hangdogging on toprope, trying to figure out the move, and then see some guy creeping across the face 10 feet below you. The classic Carderock traverse is along Hades Heights, but there are others, both low and high. 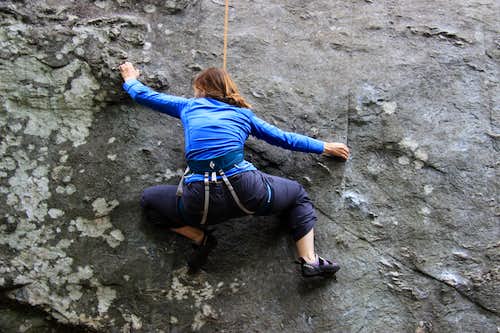 From I-495, take Exit 41, just north of the Potomac River, heading west on the Clara Barton Parkway. In about a mile, take the exit for Carderock. Go left over an overpass and turn right at the stop sign. Drive to the last parking lot.

A sign near the now-closed restrooms indicates the way to the Billy Goat Trail. You can follow the trail as it winds around the north end of the cliffs and reaches the base area, or you can descend the easy, obvious gully that divides Jungle Cliff from Hades Heights.

It should take no more than five minutes to get from your car to the crag.

As I mentioned already, there are more than 60 routes here. I'm not going to name them all. Instead, I will list and describe routes I recommend. This is based on factors such as popularity, sustained climbing at the grade, and pure fun. In all cases but one, I have climbed the routes I recommend either on toprope or lead.
I will separate them first by crag and then by toprope or trad. They are listed from left to right.

Remember, this is the one on the left as you face the cliffs from the bottom. 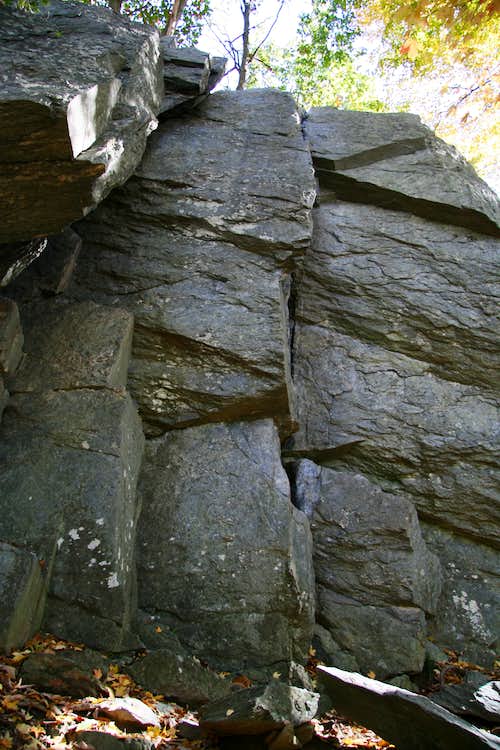 I have led three routes on this crag.

This is the taller, sunnier cliff to the climber's right after descending the gully and turning to face the cliffs.

Hades Heights has a handful of leadable lines.

No admission fees, but the area is on NPS land and all regulations for C&O Canal NHP apply (see links section).


The park closes at dark. Do not alter the rock in any way to place gear. Beware poison ivy and copperheads.No fees. Read posted regulations.

All year. The cliffs face west. Summers are hot and humid, so you want to climb early before the sun hits the rock. Winter afternoons can be awesome; climb in short sleeves even though it's in the 40s because the sun radiates off the rock, with the dry air making the slick holds a little better. Spring and fall are best but also the most crowded. 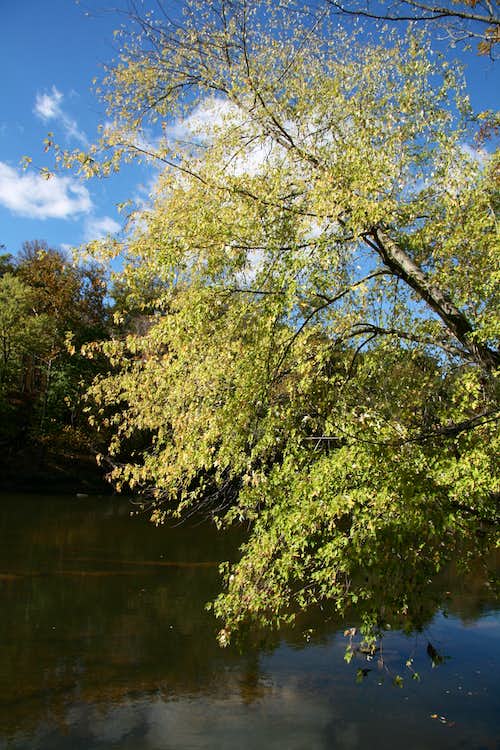 An excellent resource for the area is Eric Horst’s Rock Climbing Virginia, West Virginia, and Maryland. The section on Carderock provides photographs and one-sentence overviews of the routes.

A better guidebook is Carderock Past and Present, published by PATC (Potomac Appalachian Trail Club). The PATC guide fits nicely into a pack pocket and is full of excellent photographs that help locate the routes.