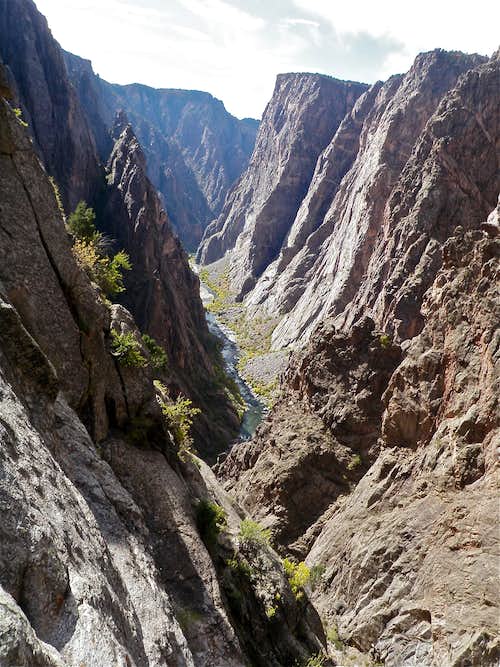 
The Black Canyon is dark, mysterious, and sometimes very forbidding. The two-thousand-foot void is an anomaly so impressive that the Black has recently become America's national park. Joining the ranks of Yosemite and Zion, the Black Canyon can truly hold its own among the natural marvels of the world.

The Black is a striking chasm. Some will come back and never return, but a demented few will fall in love for eternity. This dark void has inspired climbers and explorers alike. The massive cliffs – carved by the river over vast geologic time – reveal stories spanning millions of years. The walls stand tall and proud, frightening yet strangely seductive, holding a special place in many people’s hearts. In fact, the canyon has shaped many lives and taken few along the way.

With its remote circumstances, tick and poison ivy infested approaches, loose and unpredictable rock, challenging route finding, difficult and unprotected pegmatite bands, and long committed routes of up to Grade VI, climbing in the Black Canyon of the Gunnison is not for novices or for climbers who are not fully competent in free climbing on big, remote walls.
In fact, climbing at the Black Canyon - Colorado's version of Yosemite - is as much a form of mountaineering as it is pure rock climbing. The limited view of incoming weather or unforeseen problems on an otherwise "moderate" route can turn a pleasant day's outing into a nightmarish epic. Remember that every climber needs to be thinking "self rescue" in Black Canyon. No helicopter will pluck you to safety. Still, for experienced, competent and committed climbers, the fearsome "Black" offers some of the North America's greatest rock climbing challenges in a wild and rugged setting. 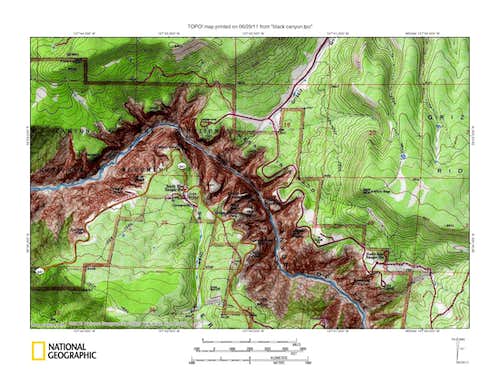 To reach the base of Casually Off-Route (same as the Casual Route) you have to hike down the SOB gully. The SOB gully is a dramatic but non-technical descent into the canyon and has long been popular with hikers, fishermen, and climbers. This gully accesses classic routes such as Escape Artist and Comic Relief, and one can head downstream to the base of the Painted Wall, passing the start of various Arete climbs. The length of the descent is 1.8 miles all the way to the river, but to the base of the climb you descent just a little bit over halfway (about 1 mile). It is class 3 trail down, no rappel necessary (Cruise Gully accessing Maiden Voyage requires 2 rappels).

Vehicles can be parked in the pull through near the North Rim Campground registration station, or at the North Rim Registration Station. The route begins at the access ladder, along the fence line on the North Rim Drive about 100 feet east of the junction of the campground circle road, or a short distance west of the ranger station. There is a sign at its start.
As I mentioned above, you need to descent about 1 mile, or 2/3 down the gully. Count about 45 min on the hike.
The first climb you will pass is Dragon Tooth, look for half dead tree just past Dragon Tooth formation. This marks the start of Casual Route and Casually Off-Route (both routes share the first 2 pitches).

Casually Off-Route is a significant variation to the Casual Route. The first 2 pitches follow the Casual Route to the base of the steeper wall, then you traverse left for pitch 3, 4, 5, and 6, and at the top of 6th pitch you join back with the Casual Route. You can climb one more pitch, about 5.8 difficulty and then you scramble out a steep and overgrown gully. You will end up back in the campground.

It is one of the easier climbs in the Black, rated as 5.9, grade III. Please despite its relatively low rating (only one pitch is 5.9) do not underestimate this adventure. There are some sections, which I found challenging enough, and not everyone feels comfortable leading laybacks on slippery lichen.

The route is located on the left side of SOB gully, and does not get sun until late afternoon. Plan accordingly, e.g. if climbing in the summer start early to avoid hot sun, and during the cooler months dress warmly.

There are nice views of Dragon's Toth. Dragon Tooth is a 4 pitch, 5.8 climb up the prominent tower. We were lucky to see a climbing party on this formation - Close up photo of climbers on Dragon's Tooth.

1 set of nuts and set of camalots up to #4. Anchor building supplies - you can sling trees at some anchors.
One 60 meter rope is sufficient.
Loose rock - so, definitively a helmet!
Be cautious of cacti on the climb.

North Rim Campground is open from Spring to Fall. There are 13 sites in pinyon-juniper forest with vault toilets, tables and grills. Water is available mid-May to mid-September (we had no water in October). Please do not waste water, park rangers have to haul it in. All sites are available on a first-come, first-served basis (no reservations).