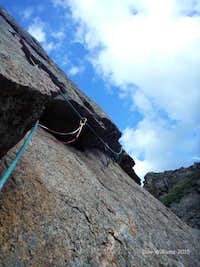 5th Pitch
Checkerboard Wall is a popular enough route when you check the summit log on Mountain Project, but the initial pitches are uneventful and much of the rock had a choss feel to it outside of the 4th pitch.  It is obviously a much shorter day than Scenic, but at least the 5.10 climbing was similar in nature: fingers, stemming, interesting pro and some run out aspects. In fact someone added a modern bolt (there are several old pitons) and Ed Webster promptly asked that it be removed and the hanger has been. “It took me a lot of concentration to figure out those thin face moves where the bolt is now, and to get up the nerve to do them.” He established Checkerboard Wall in 1982. Interesting enough, he states that he has never repeated it. 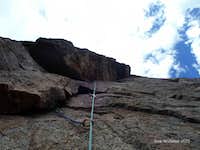 4th Pitch
The first two pitches are rather nondescript. The third pitch is exposed and has several moves at the grade on suspect rock with intermittent pro, some even call it run out, but I did not think so. A piton after you pull the roof is critical however. The 4th and 5th pitches are the crux pitches on the route. It depends on your skill set as to which might be the bigger challenge. The 4th pitch deals with a corner with the crux move pulling out of the corner onto face. The 5th pitch starts with a corner as well, pulling out of it with a mantel move and then climbing face to a steep roof traverse. The pull of this roof is relatively easy and the ground remaining to the top of the route is as well, but also contains the worst rock on the route.

Cruise gully is accessed by hiking from the campground back towards the ranger station and turning right on the only trail on the right which is located approximately half way in between the two. Descend Cruise Gully which requires two fixed rope raps (2015). After the second rap, pay attention to traverse to the left to the very left base of Checkerboard Wall. The start of the climb is not well marked or traveled. It starts in an easy right facing, moss covered corner on a bushy slope.

1st-2nd Pitches- 250’- 5.8/ There is little if any 5.8 on these first two pitches, most of the climbing is more like 5.6 and makes for a relatively easy simul climb to below a roof that is traversed out right to start pitch 3. Head up the easy moss covered right facing corner for about 100’. Step left and continue up a dihedral that eventually trends right and up to below an arching roof. This whole section is a bit bushy and mossy and uneventful in general.

3rd Pitch- 100’- 5.9/ This is a fun and exposed pitch with thoughtful gear. Move out right under the roof with foot features and solid small gear in the roof. Pull it up and right onto the face directly above and make an exposed move or two at the grade to reach a solid piton (2015). Then follow the intermittent finger crack using delicate face features to advance upward on the right side of the crack. This is not a plug and go crack, rather a more thoughtful lead. Near the end, trend up and right on face features at the grade to a ledge below the right facing corner with an overhang at the start.

4th Pitch- 140’- 5.10/ Some consider this the crux pitch but I would opt for pitch 5 being the mental crux of the climb. Move up and right past a piton and stem back left into the great corner. Mostly fingers and stemming peppered with facial features lead up to where the corner arcs right. Place and extend a piece high before pulling left out of the corner onto the face and clip a piton. Missing this clip could cause an injury as you would fall back into the corner. A few interesting moves at the grade with a lay back and side pull as I recall lands you at a hanging belay below a short and shallow right facing corner.

5th Pitch- 160’- 5.10/ Stem up the intermittent finger corner. The first crux is a reachy committing mantel (5.10) move out of the top of the corner and up to a sloping stance. There is a piton in the floor as well as a C4#.75 option, but reaching either of them before making the move can be height dependent. There is a brand new bolt mentioned on Mountain Project on the blank face above. It is no longer as Ed Webster asked that it be removed. There is however still an old pin in place that helps protect this section. Head up to the long roof and step high to place a good medium piece, than back down and under cling (5.10) the roof out right for about 20’ until you can mantel above it (5.8/9). Continue up, trending left on less quality rock through 5.8/9 terrain placing intermittent gear as you aim for the left shoulder of the wall.

Walk off left and down and traverse across reaching the first gully. Continue traversing to the second gully and ascend this gully on a climbers trail to the rim. Head slightly left to reach the road between the ranger station and the campground.

The standard call is for a single set to C4#3 with additional smaller cams and stoppers. If you have off set cams and/or nuts, they come in handy on this route on about every pitch.  As with most Black Canyon routes, it traverses plenty, bring a dozen shoulder length slings. With a 70m, it looks like you could retreat this route easily from the top of the third pitch on existing tat (2015). This route receives plenty of afternoon sun in September, it appears more west facing than anything else, dress accordingly. Of course there is poison ivy in the Cruise Gully, long pants advised. This route has a bit of choss, helmets advised.