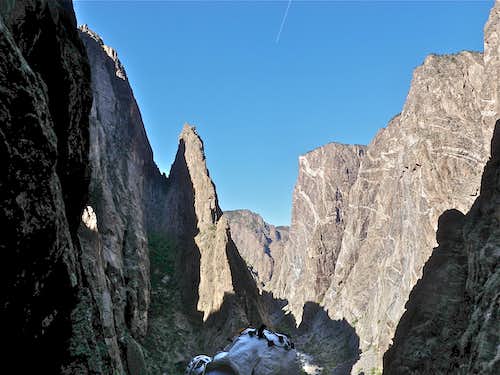 View into the Black from the 1st pitch

The Black Canyon is dark, mysterious, and sometimes very forbidding. The two-thousand-foot void is an anomaly so impressive that the Black has recently become America's national park. Joining the ranks of Yosemite and Zion, the Black Canyon can truly hold its own among the natural marvels of the world.
From Black Canyon Rock Climbs by Robbie Williams


With its remote circumstances, tick and poison ivy infested approaches, loose and unpredictable rock, challenging route finding, difficult and unprotected pegmatite bands, and long committed routes of up to Grade VI, climbing in the Black Canyon of the Gunnison is not for novices or for climbers who are not fully competent in free climbing on big, remote walls. This means sport 5.10 climbers can find this place extremely challenging.
In fact, climbing in the Black Canyon - Colorado's version of Yosemite - is as much a form of mountaineering as it is pure rock climbing. The limited view of incoming weather or unforeseen problems on an otherwise "moderate" route can turn a pleasant day's outing into a nightmarish epic. Remember that every climber needs to be thinking "self rescue" in Black Canyon. No helicopter will pluck you to safety. I heard stories about a long process taking sometimes up to 2 days to rescue stranded climbers. Still, for experienced, competent and committed climbers, the fearsome "Black" offers some of the North America's greatest rock climbing challenges in a wild and rugged setting.
For me, it gives me humility. Not sure whether I can call myself a climber, always end up beat up and exhausted at the end of the day after climbing in Black, but I keep coming back. It is a magical place to climb and to visit. 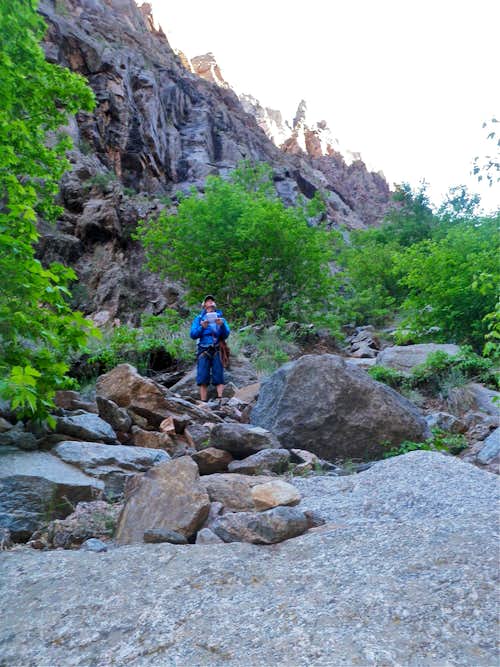 Studying TOPO of the route)

The climbing season at Black runs from early April through the first of November. Spring can be wet, with possible wind, rain and snow. Summer can be pretty hot, especially on the south facing routes. Climbs on the shadier walls of the North Rim might be the ticket during the August heat, and a good timing. Many routes are shady in the morning, as this one Escape Artist and later in the afternoon when the sun hits it becomes very hot, black rubber on rock shoes burns up your toes. Fall is the perfect time to climb at the Black; with dry, warm days and cool nights the norm.
All climbs are within the designated Wilderness Area of the Park's Inner-Canyon and you will need to obtain a free backcountry permit at either the North Rim Ranger Station or the South Rim Visitor Center. Both places have self-registration materials out front for after hours check in. An extensive "climbers notebook" is kept at both the North Rim Ranger Station and the South Rim Visitor Center for reference. You can copy the descriptions and topos.

Don't underestimate the scope of undertaking a climb from the depths of the gorge. Besides a full complement of standard big wall gear, you'll need plenty of water, clothing to stay warm and dry, and emergency bivy gear. You should also have a second rope to facilitate retreat. Rescue is difficult-to-impossible in this terrain. No helicopters venture into this narrow rugged terrain.

Approaches range from descending draws on simple hiker's trails, to arduous, multi-raps down gullies choked with boulders, brush and ticks. Along the river are many bivy sites; but also there's poison ivy in abundance.

Most routes are located on he North Rim. Remember these climbs face south, and the dark rock can be almost too hot to touch during the hot summer days. South Rim has less climbs, and more difficult approaches.

Escape Artist is one of the more popular routes in the Canyon. First ascent: Ed Webster and Chester Dreiman, October 1982

The route ascends an obvious line up the left side of Escape Artist Buttress, the second buttress on the left side of the SOB gully. The route offers varied climbing with sustained cracks, a long traverse pitch, good belay ledges, and interesting face climbing. From the gully below the buttress, take a minute to scope the route - Escape Artist follows a long left-angling crack system (the Vector Traverse) to a prominent left facing dihedral on the left side of the buttress.
The Black Canyon Rock Climbs guide book by Robbie Williams describes only 5 pitches, but it takes 2 pitches (300 feet) to get to the start of your climb, which have some 5.7 moves on it, and 2-3 long pitches (400 feet) above to reach the top, again you can encounter some 5.4-5.7 terrain on those higher pitches.

Escape Artist is located on the North Rim of the Canyon.

You may be surprised by the size and condition of the road. It does not feel like you are driving into a national park. Most visitors to Black Canyon visit only the South Rim, which is more developed. The North Rim has no services, only a small park ranger station, dry toilet and a nice campground. Most climbers come to the North Rim, most tourist come to the South Rim.

Finding the Route
To reach the base of Escape Artist (same as Comic Relief) you have to hike down the SOB gully. The SOB gully is a dramatic but non-technical descent into the canyon and has long been popular with hikers, fishermen, and climbers. This gully accesses many routes such as one of the easiest climbs in the Black Casual Route and Cassually off the Route, and one can head downstream to the base of the Painted Wall, passing the start of various Arete climbs. The length of the descent is 1.8 miles all the way to the river, but to the base of the climb you descent about 3/4 of the gully (about 1.5 mile). It is class 3 trail down, no rappel necessary (Cruise Gully accessing Maiden Voyage requires 2 rappels).

Vehicles can be parked in the pull through near the North Rim Campground registration station, or at the North Rim Registration Station. The route begins at the access ladder, along the fence line on the North Rim Drive about 100 feet east of the junction of the campground circle road, or a short distance west of the ranger station. There is a sign at its start.
As I mentioned above, you need to descent about 1.5 mile, or 3/4 down the gully. Count about 45-60 min on the hike.
The first climb you will pass is Dragon Tooth on the left side of the gully, then follows Casually Off the Route and Cassual Route. Just before you reach the base of Lauren’s Arete on the right side of the Gully (about 50 meters up) look on the left side wall and search for a prominent left arching groove/overhang and two parallel cracks below it. Escape Artist and Comic Relief start at the same spot, and chances are you will run into another party. These are one of the more popular routes in the canyon.

Descent: Attempt to descent while it is light outside, the descent can be a little complicated. From the island summit, find two sets of rappel anchors on the left side. So, when you look north - you will see a rock with slings wrapped around it. We used this to rappel down, but supposedly there are rappel anchors about 15 feet farther left. Again, we used the rock with slings - this rappel was rather awkward, it is little overhanging and pulls you into the canyon. You have to control it and try to get into the exit gully. This rappel also takes you through a hole under a large boulder, so you are risking that your rope will get stuck. Take your time and look for the 2nd set of rap anchors. Rappel into the steep exit gully from the slings. Scramble up the steep gully (4th class). We took the exit gully to you right, following at the base of a large cliff. The first section of the scramble is pretty steep (4th, maybe even low 5th class moves), and a fall in this section would be fatal. Higher up it gets much easier and gradually changes into a trail. Follow this trail and you will end up at North Rim Campground, campsite # 1.
Yes, I called it descent, because you do descent/rappel from top of the buttress into the exit gully, and then you have to scramble up.
Some images from the descent/getting back to campground 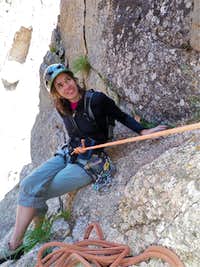 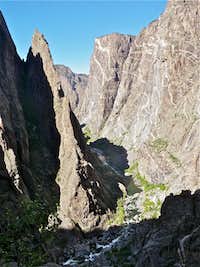 One 60 or 70 (we had 70) meter rope, Full rack with doubles from 0.3 to #3 cams, 2 sets of nuts (especially small ones). Slings. Personal climbing gear: harness, shoes, helmet. Remember pitches are long and you have to build your anchors, so depending on your comfort level you may need much large rack.

Bring water - this climb is in the shade in the morning, but most likely early afternoon you will get hit by the sun, and the black walls of the canyon get hot!

Make a copy of topo of the route and a route description. The routes are big and it is easy to get lost.