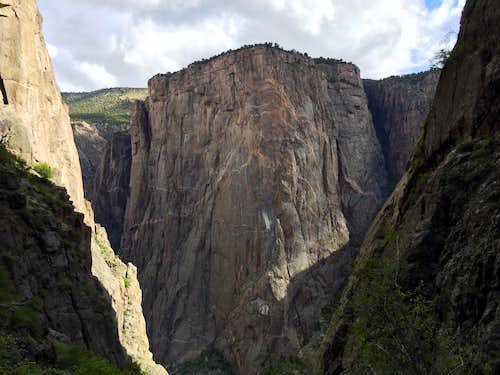 North Chasm Wall as seen from the descent into Chillumstone Gully 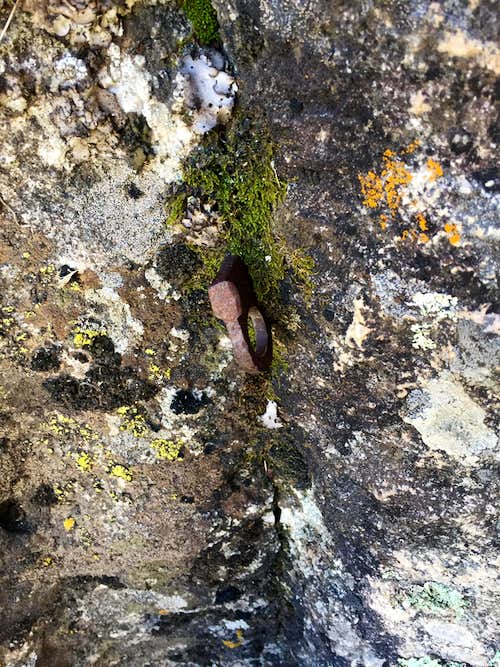 Old piton Wonderland
Wonderland is a moderate route located on the South Rim of the Black Canyon. Most rock climbs within Black Canyon of the Gunnison National Park are located on the north rim, and most climbers do not venture on the more touristy South Rim. Climbing here requires more adventurous approaches, and you get a more isolated feel while climbing. The North Rim part of the park offers the feel geared towards climbers: the park rangers know a lot about climbing (you actually deal mostly with climbing park rangers here), there is a board at the tiny ranger station and climbers list their names and routes they are planning to do. The South Rim Ranger Station is geared towards tourists, each time we filled the permission to descent down the Chillumstone Gully (2x), the ranger did not even know where this gully is.
Wonderland is an old school 5.8, expect more 5.9 climbing and some run outs. The terrain is slabs with some run out, finger and bigger cracks and a chimney. The route higher up connects with Ground Control to Major Tom (a part of the last pitch). The exit pitches are the same as for Ground Control to Major Tom.
First Ascent: Ed Webster, Patrick Griffin, Udom Likhitvonnawut in May of 1984
The climb was first documented in 1985 in American Alpine Club Journal. Webster originally stated, "For aesthetic, safe climbing at intermediate level, this is one of the Canyon's finest. The initial three leads are very enjoyable." Despite this original description, the route is not very often climbed. I have enjoyed it though, but consider Ground Control to Major Tom a better and more varied route.
The best guide book for climbing in the Black is the new guidebook: The Black: A Comprehensive Guide to Black Canyon of the Gunnison National Park by Vic Zeilman. There is no TOPO for this climb, but the route finding was pretty obvious.
There is no description of the climb on Mountain Project yet.
The access gully is steep and unsigned Chillumstone Gully (same as for Ground Control to Major Tom climb) 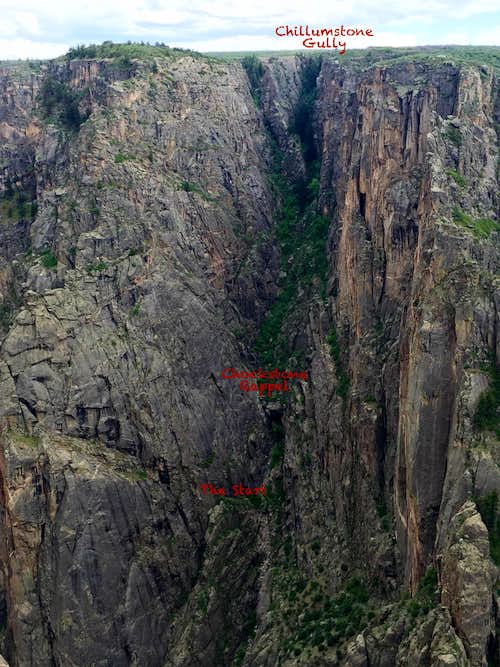 Chillumstone Gully as seen from the North Rim, Wonderland starts at the Rappel (the start marks Ground Control to Major Tom). 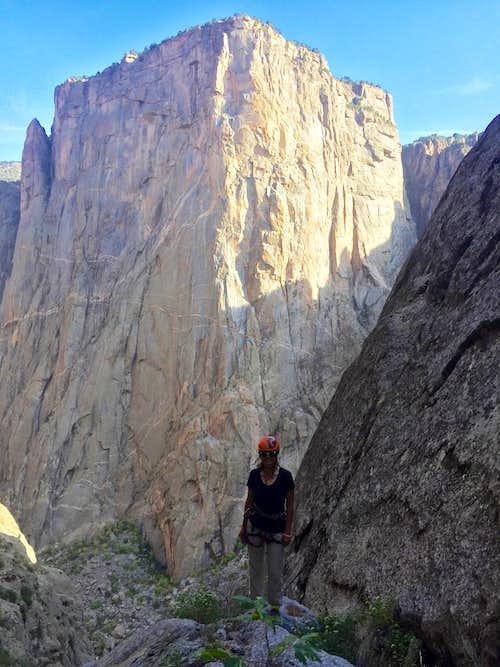 North Chasm Wall as seen from the start of Wonderland
See the main Black Canyon website how to get to the South Rim (the main part of the park).
Chillumstone Gully: From the visitor Center drive past the Pulpit Rock, Cross Fissures and Rock Point Overlooks. Either park at Devil’s Overlook and walk up the road a short distance, or locate a single car pull out (the best option) right next to the 20 MPH curving road sign. From the 20 MPH sign, scramble down the hill to a faint climber’s trail that leads to a stand of pine trees. Thick oak brush and steep, loose dirt will eventually turn to gnarly bushwhacking before opening up into a more rocky drainage. 30-45 min of scrambling (with the occasional section of 4th class down climbing) leads to the Chockstone Rappel. This was my 2nd time descending this gully and the terrain was familiar. The first time we descended after a slight overnight rain, and the gully was wet and very slippery. It took us 45 min to get the the rappel, which is really far down. I called the day before our climb the ranger station to inquire whether the rappel has a static line (sort of like Cruise Gully), the park ranger referred me to the last guide book "The Black: A comprehensive climbing guide to Black Canyon of the Gunnison National Park". The book did not mention the rappel set up, mountain project comment from 2013 mentioned there is a fixed rope. We found an old rope which appeared safe and rappeled down when we did other climbs below.
The Wonderland climb starts right at the rappel station.

You have to rappel down for Ground Control to Major Tom climb, also BlackJack 5.9+.
About Chillumstone Gully: The Chillumstone Gully is home to many of the longer moderate climbs on the South Rim, as well as impressive vistas of North Chasm View Wall on the opposite side of the river. Although it is one of the nastier drainages in the Canyon, for those with the right mindset, a trip to this area of the Black is highly recommended - Vic Zeilman. It is unclear who first explored this gully, but it quite possible that it was Layton Kor.
Gullies in the Black Canyon are notoriously infamous for poison ivy, luckily the Chillumstone gully has no poison ivy!

Start at the Chockstone Rappel.
Pitch 1: Climb a finger crack straight up, when it ends continue on a slab past a fixed bolt to a small ledge. We made an anchor just above an old rusty piton (2nd fixed piece in). The last section was a little bit run out. 5.8 about 150 feet
Pitch 2: Angle very slightly left, then follow a finger crack with a some fixed gear, over a roof (easy). There is another crack with fixed piton and a small stance. 5.7+, again about 150 feet
Pitch 3: Slab climbing up to a bolt, incipient crack to another bolt. There is a 3rd bolt above and that one is hard to see, just head straight up. Get over a small headwall to another ledge with belay. 5.9, about 150 feet.
Pitch 4: From the ledge head up and right into a bushy gully, continue up this gully , an easier terrain into a chimney, which will become a tunnel. Belay right above the tunnel exit - you joined here Ground Control to Major Tom route.
Pitch 5: We have done this both ways, either exit from your chockstone cave left by stemming and getting onto a easy terrain leading to the summit of a small tower (recommended), or exit the chockstone cave to the right, more loose, again easy terrain. There are a few 5.5 moves initially and higher up it is mostly 4th class terrain.
Enjoy the summit of a small tower. You have to down climb into the notch and follow the exit pitches to reach the rim of the canyon. The down climb is exposed, but relatively easy. Consider staying rope up, a fall here could plummet you way down with serious consequences.
There is an option to rappel down into Chillumstone Gully from the notch:  I have not done it, but per report 2 single rope rappels and scrambling needed. You end up pretty far low in the gully (just a little bit above your climb). This option may be advisable if late and darkness approaching.
Pitch 6: We started in the notch (after taking a break in the shade). Head up from the notch to a short a steep hand crack 5.9, that leads to a triangular roof. The first few moves out of a notch are easy, then there is a small ledge and slightly to the left is the obvious hand crack, slightly overhanging, but with great pro and some features next to the crack. Exit right and belay at a stance.
Pitch 7: Move up and left to a short, awkward 5.9 crack followed by easy wondering on the ridge. Belay at the large terrace above. We walked about 100 feet right on this large terrace.
Pitch 8: Climb a short 5.9 fist crack, then finger crack and finally a mantle move to get you to the top of the first rock island. There is a tree, but I did not try to reach its branches, it appeared that many people tried to do so and branches were broken.
The 1st rock island is big! But there is no easy walk off from here. It ends up abruptly with steep walls on all sides. Coil the rope here and walk 10 min along the right edge (initially in the middle, then towards the right), looking for a weakness leading to the 2nd rock island. You can see your car parked nearby, yet, you are still far away with technicalities ahead of you. There was not much of a trail. The steep descent gully was marked with 2 small cairns. The down climbing was steep, but felt secure. Later, I have noticed even a fixed line to the skier's left on the gully (we have not used it).
Scramble just below the notch between 1st and 2nd rock islands, pay attention to your footing, it is all loose here. We chose just to climb straight up from the opposite descent gully of the 1st island. The rock was loose at places and there were some of 5.5 moves here = pitch 9. Finally, we reached the summit of the 2nd rock island, which is much smaller. The views from here are spectacular! The short 4th class descent gets you into the upper part of Chillumstone Gully and 5-10 min walk to your car.