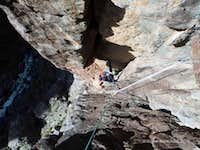 2nd Pitch finish (crux of the route)
Russian Arête would be as popular as just about any of the climbs in the Black if it were not for who mostly congregates to climb here. The suburbanites commuting from Boulder stick to the shorter climbs typically. The Russian Arête requires that you descend all the way down to the river and then scramble several hundred feet up the western wall before you rope up. And even then the six pitches I led roped up were 200’+ for every pitch. Then a 600’-800’ scramble to finish it off with more hiking required than normal at the Black.  Therefore, it takes at least an efficient team to do this route in the fall or spring daylight hours and it would typically be too hot a route to tackle during the longer summer days. 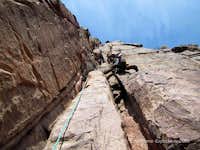 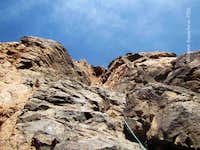 2nd Pitch view from below
Layton Kor’s routes are always somewhat artful and Russian Arête is no exception. The 2nd pitch (crux of the route) involves an exceptional stem chimney that lasts for half the pitch. The final direct pitch variation (not part of the original route and little to any beta as of 2016) is outstanding as well and serves as the 2nd crux of the day. I trended right from atop the final chimney and then cut back left. When I topped out of this steep final head-wall, it put us square below 4th class terrain that leads to the ridge proper which eventually leads back to a trail circumventing back to the ranger station. Most avoid this final variation and just scramble up the right side gully. Outside of these two pitches, there is very little if any 5.9 climbing and the route goes fast for the competent leader. Most of the chimney climbing, if not all of it, involves stemming vs chimney technique. Pro was placed at will for the entire route. Although most of the rock has the look of chossy limestone (Russian Arête was no doubt a play on Russian Roulette) as is the norm in the Black, the rock is much better than it looks and this route sees its fair share of traffic albeit not as much as it deserves compared to other routes across the canyon. Although the guide lists nine pitches, a competent party can do five very long roped pitches and solo the scramble portion. Layton established this gem before I was born in 1962.

Descend SOB gully all the way to the river. Turn right and look up to locate an obvious tower several hundred feet up from the river. Take any one of several gullies as you aim for the right side of that tower. However the route does not start just to the right of the tower. Rather you must scramble up approximately 100’ once you reach the same level as the tower to locate the first pitch which is approximately 100 meters to the right of the tower. There are many photos of the first pitch and I have included one here. There is an easy to locate small arched roof at the start of a wide splitter. The start was marked with a good sized cairn in 2016.

1st Pitch- 200’- 5.8/ Enjoyable and clean pitch that goes quite fast for the grade. Climb the wide crack placing gear at will and belay on one of several ledges below a tall corner pitch that pulls a roof which bleeds into a stem box. The guide references pg13 on this 1st pitch of which I do not agree. It went straight forward with ample amount of pro. Some mention bringing a C4#4 specifically for this pitch, I took none nor recommend carrying that size for this route.

2nd Pitch- 200’- 5.9+/ This is the crux pitch of the route and by far the most sustained and best climbing. Head up the chossy looking corner and pull the roof with stems and hand jams. Continue into the stem box above with cool exposure placing smaller gear and face climb edges to the right to a belay stance with good gear in hard rock.

3rd/4th Pitches- 230’- 5.8/ Move left above the void below and into the right facing corner. Either belay at a nice ledge mid height or continue to a large ledge (shaded) at the top of the corner and below a tall chimney section. The guide mentions 5.9 climbing on this pitch, but there is little to any to be found.

5th/6th Pitches- 270’- 5.8/ This pitch is easily simul-climbed or if you divide the previous two pitches, extend the 4th pitch up to the first ledge in the chimney (at 40') and you can make it to the top of this system in one exact 70m lead. Again the guide mentions 5.9 climbing on this pitch, but if you climb cracks and chimneys much at all, you will find most of it easy 5.8 stemming and jamming. There is a small roof pull somewhere in there, but it goes with hand jams.

7th Pitch- 200’- 5.10-/ I guess many if not most (according to existing beta) exit the climb at the bottom of this final head-wall. That does not make sense though. You basically can finish the entire arete straight up and back into the plateau without any traverse. And, although not as well traveled yet, this final pitch goes nicely through a myriad of options. I am fairly certain one could find a 5.9 path if they needed. There are definitely multiple 5.10- options. The one I chose was to meander right up through a bulge crux and continued until under a hand/finger rail traverse left. Instead of the rail, I chose to pull the arete to the right and finish up steep ground to the massive shoulder above.

From there, we un-roped and soloed the 3rd-4th-5th class scramble up to the ridge proper. Then we followed the ridge all the way back into the heavily forested plateau. There were a few 5th class moves involved until the final summit-like viewpoint on top of the rim. We continued northwest staying up and out of the gully on the right until we ran directly into the rim trail and cut right to return to the ranger station. One mile on the trail sounds about right.

There is no fixed gear on the route. I took a standard rack to C4#2 and one #3 and felt I had more than adequate gear even with the long pitches and gear belays. But I run things out. If you are pushing your grade, perhaps take another #3 and a #4 or even additional #2. I placed no wires. As with any alpine style route, shoulder length runners are more useful than draws. This is a warm route, even for the Black. Take at least 2 liters of water and skimp on the clothes. The Black is always warmer down by the river than up at the rim. Add the fact that this is a south facing route, you can head down with much less clothes than you might think waking up on the rim on a cold fall morning. There is quite a bit of scrambling at the beginning and the end of the route, so take decent approach shoes. I never wear a pack, just go off my harness, but if you do decide to bring one, most of the chimneys are done stemming versus chimney technique so you can climb with one on for most if not all of the route.