Cima Ogniquota is a subsidiary summit of the prolonged ridge of Monte Porrara (2,137 m), the southern extension of the Majella massif, and divided from the main range by the mountain pass "Guado di Coccia" (1,674 m). The summit actual features two peaks, both of the same height. Dismissed by some as a mere foresummit of Monte Porrara, its prominence can back a point of view that regards this mountain as an independent peak.

However, since the master route to Monte Porrara runs along its south ridge, which is considerably shorter, Cima Ogniquota remains mostly in the shadow of its adjacent sister summit and, hence, is climbed rather infrequently. The western escarpment of the entire summit ridge is much steeper and rockier than the softer east slopes whose lower parts are largely covered by extensive beech forests.
In order to enjoy the spectacular panorama views that the prolonged ridge is offering all the way a full traverse of the mountain chain - from north to south, i.e. from "Guado di Coccia" to the old train station of the village Palena - is surely the best option. This view includes not less than five of the major mountain ranges of the Apennines (Majella, Gran Sasso, Velino/Sirente, Monti Marsicani/Monti della Meta and the Matese massif) and several other minor peaks (Monte Morrone, Monte Rotella, Monte Pizzalto etc.).

An ascent via the south route is also possible and will take you first to the summit of Monte Porrara before you reach Cima Ogniquota. The north route, however, is considerably longer but without doubt the more scenic choice. Even the abandoned and rusty ski lift at 'Guado di Coccia' is not lacking a certain morbid charm.


There are at least three options to reach the mountain pass "Guado di Coccia", one from the west (the village Campo di Giove) and two from the east (the village Palena and the inoperative ski lift station at the foot of Cima Ogniquota. From Campo di Giove you may follow the so-called "Freedom Trail" (ital. Sentiero della Libertà), sometimes signposted as "I1", sometimes as "L". Also the trail that starts from Palena is sometimes as "I1", but mostly as "L". Both options are quite easy hiking trails. The one that ascends from the east, however, is somewhat longer but, arguably, more interesting. For the third option follow the asphalt road you will find at the southern edge of the village. The serpentine road will take you to an inoperative ski lift station (at about 1,100 metres). There is a large parking area.

From the parking area you have again at least to options: (1) follow the dirt track that is zigzagging uphill or follow a narrow hiking path (right) and (2) either aim for the trail that ascends from the village or (3) find your individual trail to Guado di Coccia which is not very hard to find, without fog or very low clouds around this is.


From Guado di Coccia, the mountain pass and upper ski lift station, turn left, leaving another ski lift to your left. Ascending the slope you will soon spot the almost pyramidal top of the northern escarpment of the mountain. The onset of the north ridge is hard to miss, but you will have to turn left and ascend quite a bit in order to reach it.

Without snow it should be easy to find and follow the signposting (red/white on larger rocks) all the way up the north ridge. With snow, however, you may find your own way and scramble up the ridge. From top of the north ridge simply follow the up and down along the prolonged summit ridge to the double peak of Cima Ogniquota.

From the summit, weather and depth of snow permitting, you may spot the summit cross of Monte Porrara, from where it is also possible to complete the traverse by descend the south ridge towards the old train station of Palena.


2. The south ridge (via Monte Porrara) 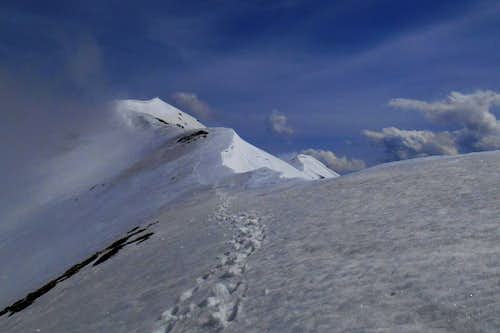 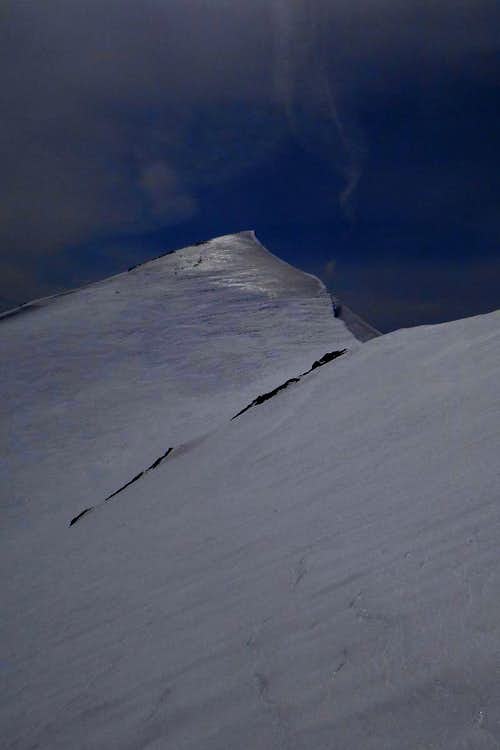 M. Porrara (summit from its north ridge)
Trailhead for an ascend via the south ridge and Monte Porrara is the old train station of Palena. It can be found a few kilometres south of the village, near the location "Valico della Forchetta" (1,260 m).

From the train station simply follow the asphalt road in a northern direction (Campo di Giove). After a view hundred meters, on the right, you will see the signposting for Monte Porrara. The trail is easy to discern and crosses the forest before it steepens considerably as it follows the ridge.

The summit of Monte Porrara holds a summit cross. In winter, though, this summit cross (almost 4 metres high) may be buried under masses of snow.

From Monte Porrara you will have to descend somewhat more than one hundred meters and simply follow the ridge up and down. After about two kilometres you will reach the double peak of Cima Ogniquota, marked only by a small heap of rocks.

From this point it is possible to follow the ridge north all the way to the mountain pass "Guado di Coccia" and to descend either towards Campo di Giove (left/west) or Palena (right/east). In either case look for the signposting for the hiking trail "L", as it connects both villages.

The closest international airport is Pescara (about 65 km). From Rome and its big international airports it is a considerably longer journey of 180-220 km (depending on the trailhead). Public transport (both bus and train) is limited and should be checked well before embarking on a journey to the Maiella massif.

Monte Porrara and Cima Ogniquota, like the entire Majella mountain range (or Maiella massif) is an integral part of the Maiella National Park, one of the three national parks of the Abruzzo region. The park was constituted in 1991. The same rules apply as for any other national park in Italy. Free camping is not allowed. There are no fees or permits required.

The Majella National Park is home to an exceptional varied wild life. For instance, you will almost certainly spot several specimen of the generally shy Chamois (Rupicapra rupicapra), prying human intruders from a save distance or from behind a rock. Other inhabitants are the Italian wolf and some specimens of the rare Marsican brown bear.


The mountain can be climbed all year round. During the snow-less months he prolonged ridge of Monte Porrara is a long and varied hike. Winter ascends require good isolated mountain boots, crampons and a single walk or ice axe.

The most northern escarpment of the mountain holds some short but diverting climbing routes, as well, and requires some (winter) climbing gear, rope, basic belay devices etc.

Snow cornice
Because of the presence of beautiful snow cornices, a winter ascent and a walk along the prolonged summit ridge might be particularly rewarding.


Unlike other areas of the Majella massif, the southern part of this mountain range does not provide shelter in form of bivouacs or mountain huts in the vicinity. However, accommodation (Hotels, B&Bs etc.) can be found easily in either one of the nearest villages: Campo di Giove (west), Palena, Lama dei Peligni (east).


There are several guidebooks and detailed maps available for the Majella mountain range. Most maps, however, are "hybrids" based on the original maps by the Military Geographic Istituto Italiano (IGMI - 1:25.000) and updated regarding to changes already conducted or planned (!) by the park authorities.

Although the general geographical features are quite accurate, several charted hiking trails do exist only on these maps. Remnants of the old signposting system can be found scattered all over the place and should not be confused with the new one (red and white).