Monte Pizzone is one of the less frequented mountains of the Majella massif. With a height of only 2,214 meters (7,263 ft) its summit is not often given the time of a day by hikers or climbers. Indeed, scaling this mountain generally does not require any mountaineering gear or advanced climbing skills. It should not be underestimated, though, because in terms of endurance and commitment it is easier to reach the higher peaks of this range.
But what makes it so hard to reach the top? For one thing, it is the fact that there is no trail or signposting, so orientation can become an issue, especially with foul weather conditions and for anyone with a restricted knowledge of the geological features of this area. For another thing, the north and south slopes are very steep and rife with scree and loose rocks. They come with passages of extremely frangible crags. Although the direct exposure of the ascent routes is negligible, the consequences of a simple slip (or a broken handhold) may be a long and unstoppable slide, or a nasty fall. The thick vegetation (dwarf mountain pine) on its slopes only punctuate the sense of isolation and remoteness of this 'minor' peak and contribute to its rather feral aspect.

Panorama Majella - Monte Pizzone
Ascending this mountain is hard labour, nothing more, nothing less. Because of its very central position and the truly unique views it has to offer, this secondary peak is still an interesting destination and climbing it a highly rewarding experience. All three routes (see below) are fairly demanding but should be viable in one (long) day, - provided you get up early enough in the morning.

Essentially, there are three routes leading to the top of this mountain. The most common and, arguably, the easiest is the normal route for Monte Acquaviva. It is signposted as hiking path P. The trailhead is the mountain hut Rifugio Bruno Pomilio, on the Maielletta plateau. At the heights of Monte Focalone turn left (east) for Monte Acquaviva. From the summit of Monte Acquaviva (8980 ft / 2737 m) you will have to descend no less than 700 meters in order to reach the col between the latter and Monte Pizzone. Except for a few cairns, there is no signposting. Before coming upon the actual col a steep and craggy passage of frangible rocks has to be negotiated. 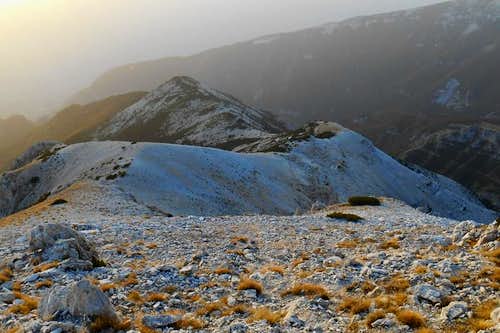 Monte Pizzone (from the east ridge of Monte Acquaviva)
Some major obstacles can be avoided by bypassing them (on the left side). The final crest (beyond the col) is a really nasty thicket of low-growing mountain pines. Do not tangle with them, because eventually you will lose (at least your nerves), but try to find a 'path', i.e. some loosely connected spots of bare rock and scree, which descends for about 50 meters before rising again almost exactly under the heap of rocks that marks the summit.

Note: In case you should be wanting to take the same way back, keep in mind that the total difference in altitude between the Monte Acquaviva and Monte Pizzone alone sums up to more than 1,200 meters.
Alternative 1 - Fara San Martino - Valle di Acquaviva
The first part coincides with one of the normal routes to Monte Amaro and traverses the beautiful valley 'Valle Santo Spirito'. It is well signposted as H1. At the junction 'Bocca dei Valloni' turn right (north) and take the trail G6. While proceeding the trail itself becomes increasingly less evident, so it is imperative to pay close attention. About 100 meters before reaching the well 'Fonte del Pesco' turn left (or refill your water supply at the well before turning back and then right).
The path is now occasionally signposted with  F2  and traversing a large beech forest before descending again to the bottom of a valley. The path terminates right at the torrent which can be crossed by bypassing the huge rock on its left hand side. Under overhanging rocks you will find a provisional bivouac (Grotta dei Callarelli).

From the bivouac face the east ridge of Monte Acquaviva and follow the left valley (Valle di Acquaviva) as it rises gradually. To your left you will have the heavily vegetated north slope of Monte Pizzone. Where the valley ends you may either take the slope that ascends further towards the east ridge of Monte Acquaviva or look for a negotiable breach in the pine thicket. From the east ridge of Monte Acquaviva it is possible to traverse the east face of the mountain; simply aim for the col and, of course, avoid the pine tree thicket.
Alternative 2 - Fara San Martino - Valle delle Mandrelle
The same indications as above apply for the first part of this route. At the junction 'Bocca dei Valloni', however, keep on the main trail (H1) until you come upon the well Fonte del Milazzo. After another 200 meters take the hiking path H2 for the bivouac Grotta dei Porci, Piano della Casa and the valley Valle delle Mandrelle. Having passed the plains the trail, now running in a north-west direction, is skirting the slopes of the prolonged ridge of Monte Sant'Angelo. The peak and the steep slopes of Monte Pizzone are now on your right.
As there are no indications and no signposting you will have to keep an eye on the col that connects Monte Pizzone with Monte Acquaviva and a couloir that might lead you up to it. From the col you can follow the normal route.
Note: The scree ramps of the south slope and the couloir are not really amusing, and you will surely feel glad to have brought a pair of walking poles with you.

A few landmarks and impressions

The closest international airport is Pescara (about 65 km). From Rome and its big international airports it is a considerably longer journey of 180-220 km (depending on the trailhead). Public transport (both bus and train) is limited and should be checked well before embarking on a journey to the Mailella massif.

The entire Majella mountain range (or Maiella massif) is an integral part of the Maiella National Park, one of the three national parks of the Abruzzo region. The park was constituted in 1991. The same rules apply as for any other national park in Italy. Free camping is not allowed. There are no fees or permits required. 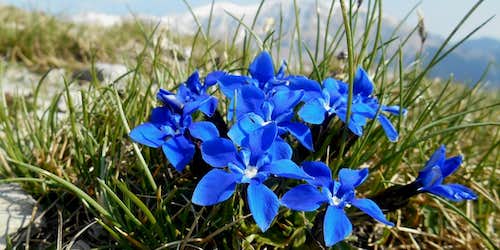 Spring gentian (Gentiana verna)
The Majella National Park is home to an exceptional varied wild life. For instance, you will almost certainly spot several specimen of the generally shy Chamois (Rupicapra rupicapra), prying human intruders from a save distance or from behind a rock.

The best season for an ascent is generally from late June through late October. Also in winter it is possible to climb Monte Pizzone on either one of the above listed routes. Some of the worst problems with the thick and impenetrable pine woods should be mitigated by the snow as these low-growing trees may be covered entirely.

Craggy (and very friable) passage
However, the often knee-deep snow is very tiresome, even on the normal route from the mountain hut Rifugio Bruno Pomilio. The craggy passage that connects the east ridge of Monte Acquaviva with the col and the final crest of Monte Pizzone might be iced. Also the steep slopes which rise from the valleys Valle di Acquaviva and Valle delle Mandrelle can hold lots of deep snow or might be packed with firn-like snow. During the winter months an ice axe and crampons might become very handy.

Accommodation can easily be found at Fara San Martino, or in proximity (f.e. at the small village of Lama dei Peligni). At the trailhead 'Maielletta' it is possible to find some rather expensive hotel rooms. These hostels are usually frequented by visitors of the nearby ski resort. A good choice is the very nice mountain hut Rifugio Bruno Pomilio (1,895 m), re-opened in September 2015, after 8 years. The hut offers room for 30 guests and warm showers.
There are two very spartan bivouac opportunities which can function as emergency shelters: 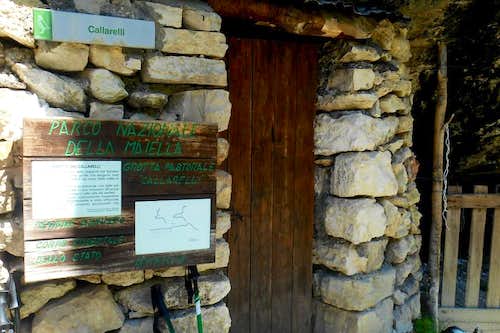 Grotta dei Callarelli
(1) Grotta delle Callarelle - situated at the junction between the valleys Valle di Acquaviva and Valle del Forcone (at the feet of the mountain); the bivouac is basically a natural cavity, closed on one side by a holey dry stone wall; the shelter has room for max. 3 guests and is endowed with a simple fireplace; nearby there is a small well (water trickling from the rocks); betimes very wet and cold, but can be used as an emergency shelter

(2) Grotta dei Porci - situated on a trail that connects Valle S. Spirito and Valle delle Mandrelle and in vicinity to the plains of Piano della Casa; in construction and features very similar to the above mentioned bivouac, perhaps slightly more comfortable; water can be found at a well (Fonte del Milazzo), only a few hundred meters (toward the valley) from the shelter

Route map - Monte Pizzone
There are several guidebooks and detailed maps available for the Majella mountain range. Most maps, however, are "hybrids" based on the original maps by the Military Geographic Istituto Italiano (IGMI - 1:25.000) and updated regarding to changes already conducted or planned (!) by the park authorities.
Although the general geographical features are quite accurate, several charted hiking trails do exist only on these maps. Remnants of the old signposting system (yellow numbers on green background) can be found scattered all over the place and should not be confused with the new one (red and white).