Monte Priora, also known as Pizzo della Regina is the third height in Sibillini chain after Monte Vettore and Cima del redentore, between Marche and Umbria, in central Italy. The mountain has a characteristic pyramidal shape, and consists of limestone, with outcroppings of majolica

From Rome: take the A1 – highway until Orte whereexit. Then follow indications to Terni – Spoleto, then Macerata. Just afte rPolverina lake, turn right, direction Bolognola. Pass the village up to Pintura di Bolognola where it’s possible to park.

From Milan, Venice, Bologna: take A14 –highway up to Civitanova Marche. Follow SS77 up to Macerata Ovest (West) exit. Follow SP 78up to Sarnano, then rise to Sasso Tetto pass up to to Pintura di Bolognola where it’s possible park the car.

From here it's possible to drive up to Forcella del Fargno pass, where the path to the summit starts. The way isn't easy, in last sector, and sometimes closed (30 min. by walk). Pay attention.

Normal from Fargno: From Forcella del Fargno pass take the path beginning just behind the Fargno Refuge, staying on the left of the big glacial circle between Pizzo Berro and Monte Bove. Go in direction of the evident pyramid of Pizzo Berro up to reach the mountain ridge ( 30 min ).. 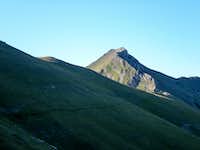 Pizzo Berro and the path to Monte Priora
Climb up to the ridge beginning,  then follow the path going to left, leaving Pizzo Berro SE side on the right. 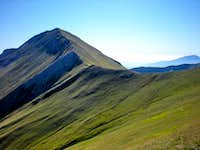 Monte Priora Ridge from South East side of Pizzo Berro
Now you see on the left the ridge of Monte Priora. Reach the ridge start (30 min.) and climb it up to the summit ( 40 min.).
A very interesting possibility is to concatenate in a single excursion foor height as Monte Priora,  Pizzo Berro , Pizzo Tre Vescovi and Monte Acuto.
Reached the path crossing SE  Pizzo Berro  side, continue the ridge up to  Pizzo Berro  summit (40 m). From here you can descend  the east ridge (ripid) up to connect with Priora ridge and reach the summit (30min desc., 40 min rising) or go back by the rised path to reach the normal way to Priora. Grom Priora summit go back for normal way up to the path to Fargno Refuge. Here stay onthe ridge and contine to Pizzo Tre Vescovi summit ( 1h 15' ). From here continue the descending NE ridge to reach the pass divinding Monte Acuto from PIzzo Tre Vescovi. From here, rise directly the mountain side pointing at right of the summit, reaching the ridge for tha last climb to sumit (40 min). Descend to the pass and from here directly to the refuge via an evident path.

No permission needed. Consider you are in a protected area and natural park. Look at Parco dei Sibillini web site to leran about the area and rules.

All season climb, best in spring and summer

Rifugio del Fargno (1811 m) on the Forcella del Fargno, open only in summer(from May to October). The refuge is “off-grid”, completely disconnected from any network to provide services water, electricity and gas.
Usual openings ( to verify everytime)