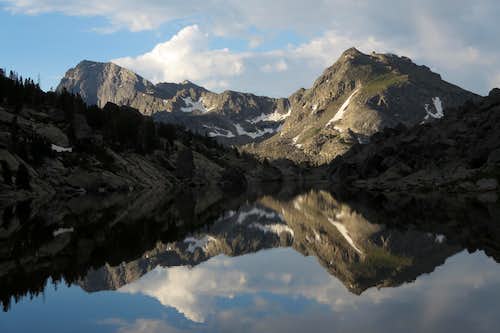 Temple Peak, Schiestler Peak, and North Lake (Not part of the Cirque)
Being such a large country, America is blessed with a great variety of spectacular natural wonders, and the American West has mountain ranges that easily find places on lists of the world's most beautiful mountains.
Wyoming has two such ranges-- the Teton Range and the Wind River Range. More user-friendly, the Tetons are more popular and iconic. Since the approaches to the alpine country are relatively short and since the peaks rise directly from Jackson Hole for thousands of feet with no intervening foothills, the Tetons draw hikers and climbers and photographers from all around the world.
Yet so do the Winds, though to a lesser extent. The longest mountain range in the fabulous Greater Yellowstone Ecosystem, the Winds are not so easily seen from roads (even when they are, the peaks are so distant that there is not an intimate feel), and climbers and backpackers typically face long approaches, sometimes taking two or more days, to get to the truly alpine parts of the range.
Despite that, the Winds still attract determined climbers and hikers from the world over mainly because of two very special places: Titcomb Basin and the Cirque of the Towers. 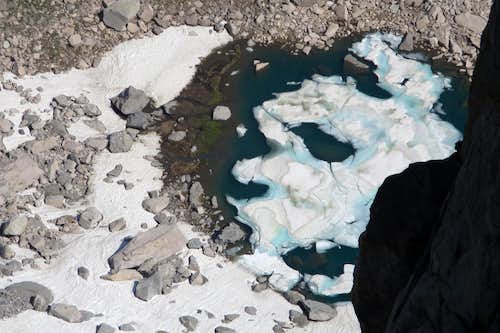 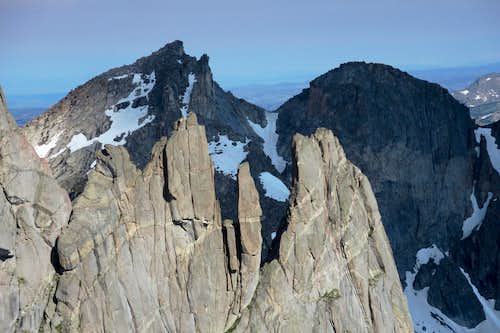 Spires on Warrior 1
An additional plus, or minus, for the Cirque is that of all the major alpine settings in the range, it has the shortest and easiest foot approach (the driving approach is a different matter; it is very long, though not as difficult as you might have heard).
The popularity of the Cirque kept me away from it for a long time, but after I finally gave in and visited Titcomb following years of avoiding it for the same reason, I decided I had to see the Cirque at last as well. Technically, I had seen its peaks before; I had looked out at them from the summit of Mount Washakie 13 years before, but that's not the same as being on and among them, is it? 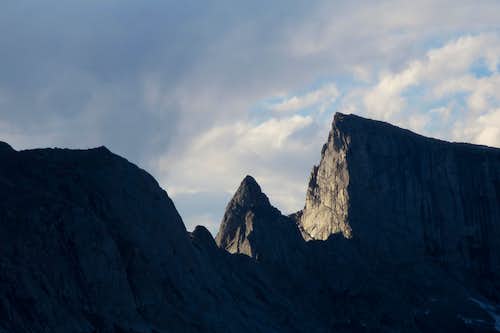 Steeple Peak and East Temple Peak (Not part of the Cirque)
Somewhere around 1 P.M., I reached the trailhead at Big Sandy and shortly afterward headed off, packed with food, gear, and beer to last me up to three nights. Climbing goals would be Sundance Pinnacle, Warbonnet Peak, Warrior 1 and Warrior 2, Temple Peak, and maybe Haystack Mountain. Warbonnet and the Warriors would let me see the Cirque and be atop some of its peaks without having to go over Jackass Pass. Then I would head out and make the long drive to the Snowy Range between Saratoga and Centennial so that I could settle a four-year-old grudge on the last day of my trip and then return to Denver and fly home to the flatlands.
Just two hours is what it took to reach Big Sandy Lake, and I was lucky enough to find a good site close to a bear bin so I didn't have to hang my food. Soon, the thunderstorms that were easy to see building during the drive in hit, and I had to hang out in the tent, killing mosquitoes that had slipped in as I was getting in myself.
As the storm passed and the rain abated, I decided to use the remaining daylight to attempt a climb of Sundance Pinnacle, which would allow me to check out the south ridge of Warbonnet as well. 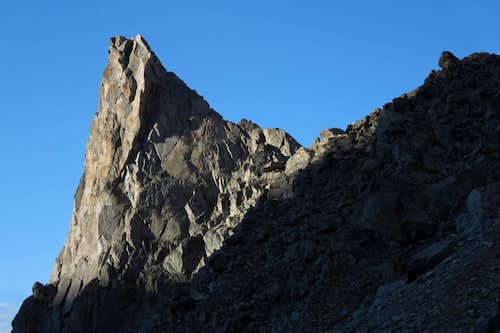 Sundance Pinnacle the following morning
Unfortunately, spells of rain continued to hit. Fortunately, I did make it to the summit, but the wet conditions made a Class 4 route feel harder and scarier. Probably, I should have saved it for the next day since it would have been just a quick diversion on the way to Warbonnet, but hell. It worked out.
Back at camp, I shoved Ramen noodles and beef jerky down the maw, had a couple beers, and went to bed.
The next morning...we can usually look forward to clear mornings in the mountains, even in the midst of thunderstorm season. Not so this day. While the sun was not nonexistent, there was less sun and more clouds. Luckily, things actually got better as the morning went on, and the day became quite hot for the altitude. 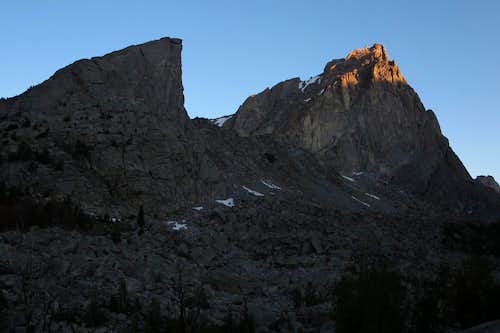 Sundance Pinnacle and Warbonnet Peak-- nice this direction but overcast in the other
Warbonnet's south ridge turned out to be disappointingly easy, though there was some redeeming exposure at the end. 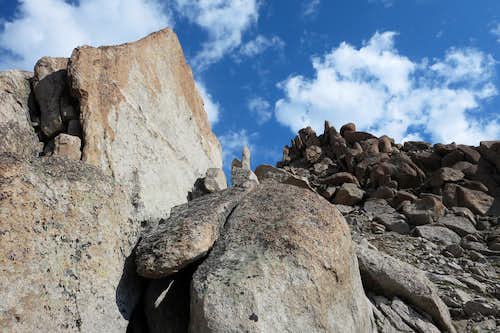 Warbonnet South Ridge
Still, my first "real" view of the Cirque did not disappoint, and I was hungry to hit the Warriors.
Both Warriors required a little scrambling, but nothing spicy. Actually, the hardest and best part was going from Warbonnet to Warrior 1. Joe Kelsey, the guru of hiking and climbing the Winds, says it is Class 2 from Warbonnet to Warrior 1, but I found it to be harder than that because of an intervening ridge and subpeak on Warbonnet. (This subpeak is well worth summiting for the very airy perch and the great views.) Maybe there is a Class 2 route over that ridge and I just didn't see it, but my way over it was Class 3 with a touch of Class 4. You could definitely Class 2 it by dropping way down into the basin south of the peak, but that would add significant extra distance and elevation gain. 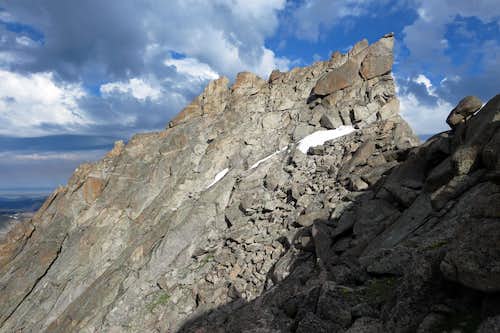 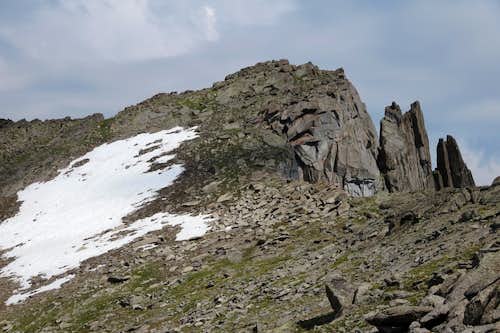 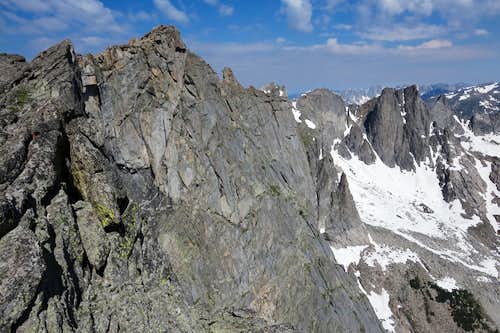 Warrior 2
By the time I got back to camp, it was both too early and too late, and it created a hell of a dilemma for me. Although it was way too early to call it a day, it was too late to do another major objective. Haystack Mountain was a possibility and probably would have been the next objective, but it had suddenly become really hazy, maybe from smoke blowing in from somewhere, to the point that as close as Haystack was, the haze made it seem not worth climbing since I would't see much from the summit.
My other climbing option would have been to try Temple, but that would have added 13 miles to the day and over 3000' of gain. After the earlier outing, I just didn't see that happening. 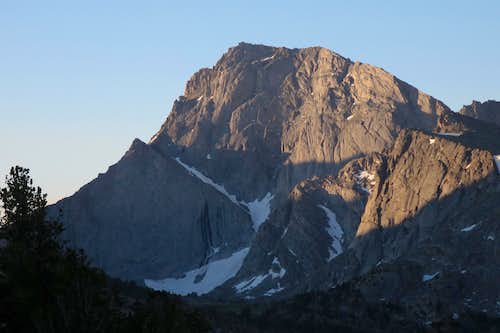 Temple Peak, Sunrise (not a Cirque peak)
Sometimes, when it's hard to decide on something, other factors decide for you. This day, there were two: mosquitoes and heat.
No matter where they are, mosquitoes suck. And not just blood. Among the many places in the country known for terrible mosquitoes are the Winds in early summer. While I was at camp, even though I had strong concentrations of DEET on, the bloodsuckers were still trying to find any vulnerable spot. Going into the tent was a poor solution because it was hot and I started sweating, even stripped down. Although going on a hike up one of the nearby lake basins was a choice as well, it was still too early for that to chew up much time, which meant I was still stuck with being hot inside the tent or getting eaten outside it.
And so I decided to bail entirely. Packing up took about 30 minutes, and I was back at the car by about 4:00, which presented another dilemma: hang out there, at least with air conditioning, and climb Temple the next morning by an uninteresting route, or move on. Not excited at all about the day-climb route on Temple, I decided to move on and save my preferred route a Class 4 one on rock and snow, for another time.
With the "extra" day, I had a chance to go somewhere I'd long wanted to check out: the Killpecker Dunes in the Great Divide Basin, a Wyoming desert landscape between South Pass and I-80. Around the interstate, the Continental Divide actually splits and then merges back together at South Pass; between the "arms" is the Great Divide Basin, the north half of which is mostly wilderness and the south half of which is largely worked by the energy industry. While most non-Wyomingites have not heard of the Red Desert and the Great Divide Basin, inside the state there has been much struggle over this land between extractors and conservationists. 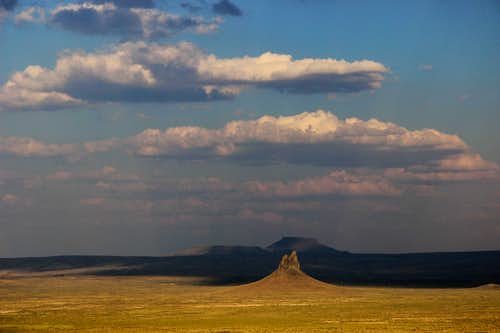 Boars Tusk, Sunset (Great Divide Basin)
So a day that began with snowy peaks ended on hot sands. The following morning, I explored the heart of the dunes on foot.
Then I headed toward the Snowy Range to try to settle that old grudge the next day. 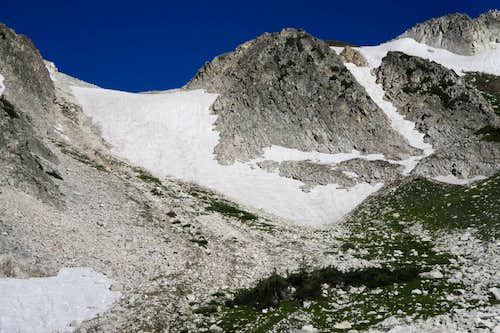 Old Main Couloir
And I did. 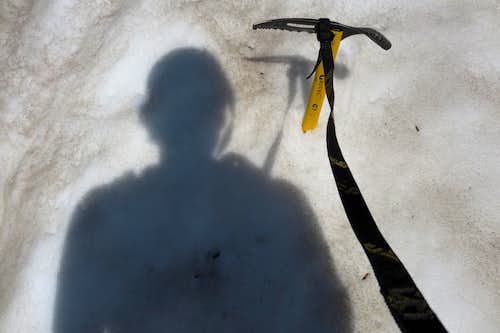 At the End of the Snow

The terrain diversity that you were exposed to within one week makes for a very interesting TR. I haven't heard of the Killpecker Dunes, but the pictures look beautiful, so its definitely piqued my interest.

The whole Great Divide Basin is pretty cool and virtually empty as well.