When you will first time visit DURMITOR, impressive alpine panorama from Zabljak (1456 m) town will inspire you. In foreground part of massif which you can see from grassy vast plateaus of this beautiful mountain town, one peak with it's special form and outlook will took your attention. This peak is important member on many postcards from Durmitor. With Savin Kuk (2313 m) and Medjed (2287 m), this peak create first line of Durmitor's peaks seen from Zabljak town, touristic center of Durmitor National Park. The name of this peak is Crvena Greda. 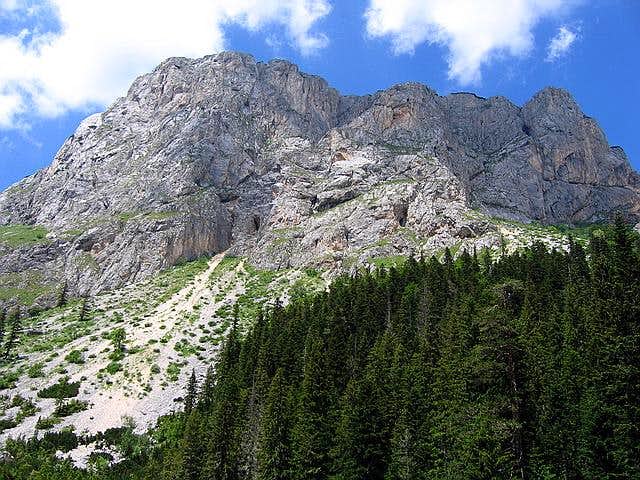 Crvena Greda (2175 m)(Red Shelf) don't belong to the group of highest Durmitors' peaks, but is for sure one of the most impressive, most beautiful, most interesting, best known and most visited peaks of Durmitor. It's beautiful massif dominates above Zabljak town and Jezerska Povrs (Plateau of Lakes) vast plateau. Looking from Zabljak, this beautiful peak stay on right side. In the morning, during rising sun, you can enjoy in beautifully colors of eastern rocky face of Crvena Greda. Mostly, you will see red color of this wall and that's the main reason while Durmitorians gave to this peak the name "Crvena Greda" (Red Shelf).

It's not so difficult to reach the Crvena Greda (2175 m) summit. This is one day tour, hiking tour. But, impressive and high E rocky wall called "Cuklin Veliki Pas" is also great draw for rock climbers and strong test of their climbing skills and abilities. Eastern face of Crvena Greda is one of highest walls in Durmitor massif. That's pure paradise for rock climbers. The most impressive and amazing view to massif of Crvena Greda and it's high rocky eastern face is from the path to Alisnica Valley, from beautifull meadow called "Poljanak" (Field). But also from Zabljak town, Crvena Greda looks spectacularly.

Crvena Greda (2175 m) is placed in the heart of Durmitor National Park, in beginning of Durmitor massif, looking from Zabljak. This peak is situated in the north part of massif . Crvena Greda together with Veliki Stuoc (2200 m), Gologlav (2196 m) and Pasina Gomila (2196 m) create the highest level of Jezerska Povrs (Plateau of Lakes) vast plateau, which on this (north) side ending and fall down in to Tara Canyon. 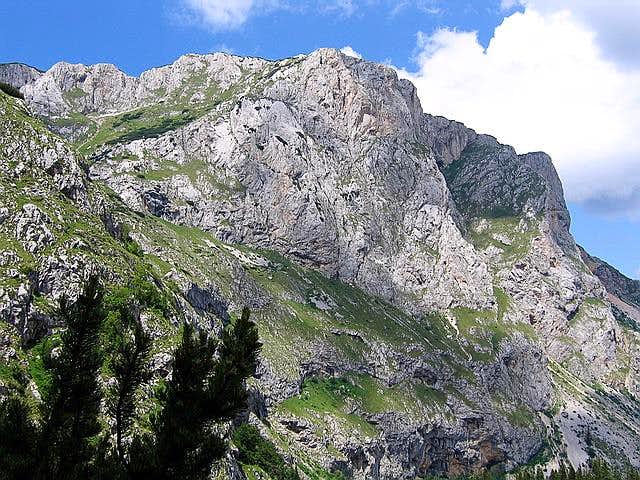 So, Crvena Greda peak si just a expression of distinction (about 700 m) between higher and lower level (altitude) of Jezerska Povrs (Plateau of Lakes) vast plateau. Staying on the top of Crvena Greda is extraordinary feeling, because you have feeling that you stay on the "top of the world", of course in this area. 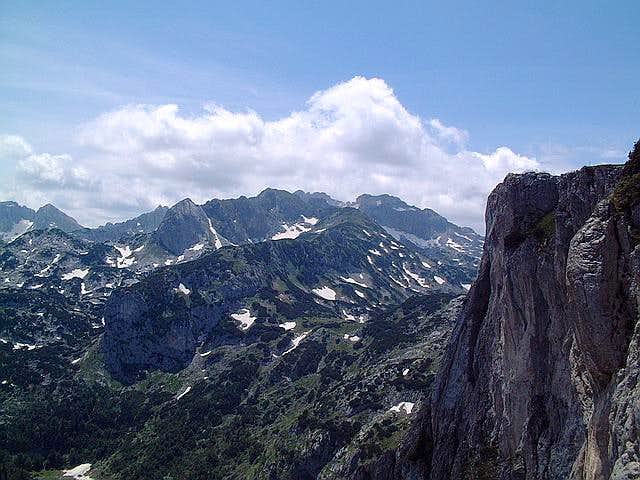 Reaching the summit of Crvena Greda is extraordinary journey! One day hiking trip! Whole day enjoyment in wonderful mountain scenery of Crvena Greda and it's incredible surroundings. Exist three approach to the summit, one classical and more two. All three are nice and special. But, people mostly practice classical approach, which is easiest and closest to Zabljak town.

Classical route beginning from Crno Jezero (1416 m) or from Ivan Do Camp, from where you can follow the marks. First, you will go inside of forest and very soon you will found Jaksica Mlin (1514 m), mountain guidepost of many routes in Durmitor massif. 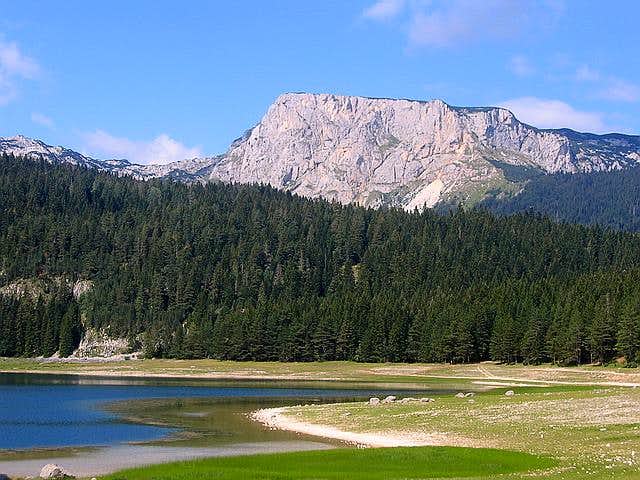 After that, when you will come out from the forest, Bosaca Village (1561 m) are beginning. Beautiful and peacefull place with beautifully alpine panoramas, like in Alps. You will go through Bosaca Village and again enter in the forest called "Jatare", when ascent again begin (about 30 minutes), after that you will come out from the forest ("Kotariste") and see beautifully meadows and amazing panoramas. Many peaks of Durmitor you can see from that viewpoint. Pure enjoyment!

Than, your ascent continue by wonderful mountain path, belowe Razana Glava (1862 m), till mountain crossroad where one path goes down to the Jablan Jezero (1791 m, 255 m long, 105 m wide, 8.5 m deep) and second to the Crvena Greda (2175 m) summit. You will folow second one, going on the rocky ridge high above Jablan Jezero. Soon begin steep ascent about 100 m high, after that you will come on vast plateau. Than, path goes near Cuklin to wide summit vast plateau called "Veliki Tavan", after that to Glava Grede (2137 m) and finally till Crvena Greda (2175 m) summit, highest point of Crvena Greda wide summit.

Award after reaching the Crvena Greda summit is great! Many beautifully panoramas in many different directions. Highest peaks of Durmitor like on the plate, amazing view to Crno Jezero (1416 m) and Zminje Jezero (1520 m). On Crvena Greda summit you can enjoy few hours in incredible mountain atmosphere. This route is for everyone, for younger and older in good condition, without rock climbing, just hiking, nice prepaire for climbing of highest peaks of Durmitor.

After reaching Crvena Greda summit you can continue your hiking adventures with reaching the summits of Gologlav (2196 m) and Pasina Gomila (2196 m) or just simply descent from the summit back to Zabljak town. Also, if you are reaching Crvena Greda in early morning time, you can descent also to Alisnica Valley and Skrka Valley. In Skrka Valley (descent from Planinica 2330 m) is Skrka Hut (1723 m) where you can sleep and buy the food. 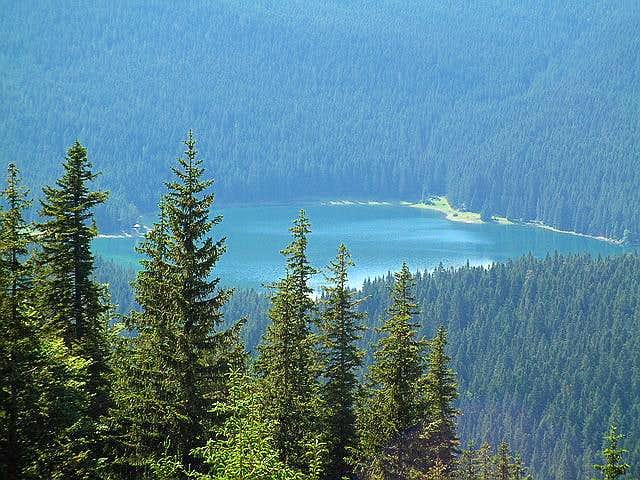 Gateway to Durmitor National Park and Crvena Greda (2175 m) peak is Zabljak (1456 m) town. Information how to get there:

Buses go to Zabljak from Beograd (Belgrade) twice a day and from Podgorica, Niksic, Pljevlja and Mojkovac several times per day. 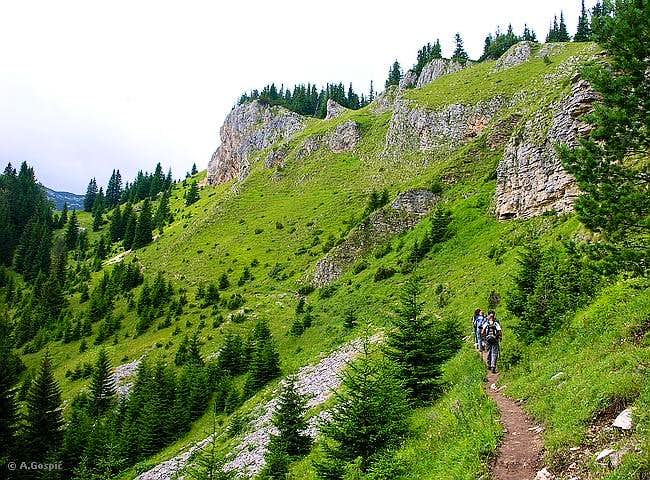 Crvena Greda (2175 m) in Mt Durmitor you can climb during all year seasons, but ideal period for climbing is mid June - mid September. But, you can also climb with crampons and other equipment during winter-spring period (March-June). Bandijerna is very attractive peak for climbing in this period.

Because Crvena Greda (2175 m) is placed above Zabljak (1456 m) town, very near from the town, in that case you don't need to practice sleeping in mountain huts. You can rent rooms or appartments in Zabljak town (6-7 euro per person).

Generally, in Durmitor, major huts are in good condition, but with no service. Still, open to the general public. Just in Mountain Hut in Skrka Valley and Susica you can buy the food, but not cooking meal. There you can sleep on beds with blankets. In other huts, hikers/climbers are supposed to bring all the jummy stuff with them.

On Durmitor exist camps in Ivan Do and Razvrsje, and few mountain huts and bivouacs:
~Hut with few small shepherd's houses in Lokvice valley
~Hut in Skrka Lakes valley (you can sleep and buy the food)
~Bivouac in Velika Kalica valley
~Hut "Mushova koliba" on the road from Zabljak to Obla Glava (2303 m) peak, near Ledena Pechina (Ice Cave) - empty simply hut from wood, without service, simple conditions...

~In Ivan Do camp price for camping is 4 Euro per day.

Also, in Zabljak town you can rent private room or apartment. Price for 2-beds apartment with kitchen and bathroom: 10-12 Euro (5-6 Euro per person).

In some villages on mountain, for example in Bosaca village, you can rent a 2-beds apartment for price 6-8 Euro (3-4 Euro per person) with free milk products every day (1 liter of caw milk).

2. Map of Durmitor National Park & Tara Canyon - 1:25000. Author: Branislav Cerovic. You can buy it in Beograd (Belgrade, Serbia) in Geokarta Co, Belgrade. Price: 2 euro. This map is better than first one and include many informations and facts about routes, peaks, lakes, glacial cirques, valleys, canyons,...