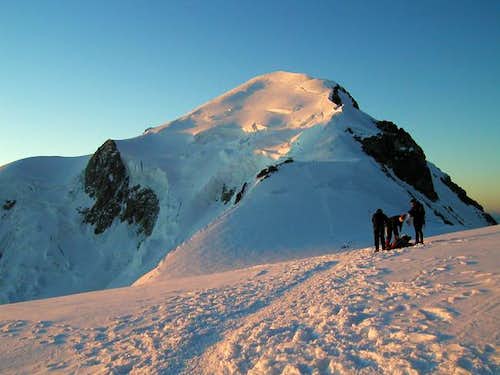 View to the summit from Dôme du Goûter
Photo by Bor 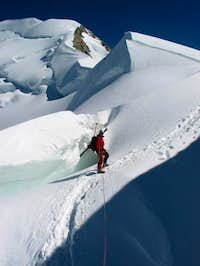 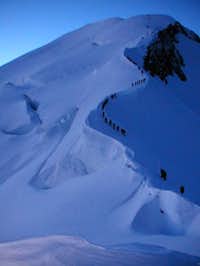 On a crowded day

One of the, if not the, most popular routes on Mont Blanc. First climbed by Leslie Stephen, Francis Fox Tuckett, Melchior Anderegg, Johann Bennen and Peter Perren on 18th July, 1861. Although fairly easy, the climb is not without danger, the most obvious being crossing the Grand Couloir on the approach. The Bosses ridge itself is very narrow and passing manuveurs between climbers can be tricky. Expect many people on the climb, not all of whom will have good manners, unfortunately. Finally, it is exposed to the winds, which can make progress diffiuclt, if not dangerous. Always be aware of the quickly changing weather.

Two of the other normal routes, the Grand Mulet and the Gonella junction into this route. 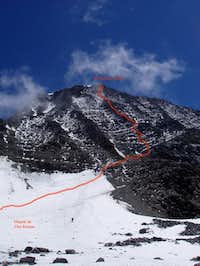 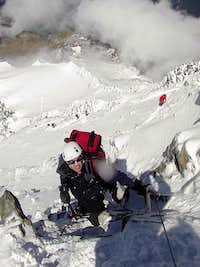 In brief, the approach is as follows:


It is also possible to climb the rock rib north (left) of the couloir. This way is only slightly more difficult. The Goûter hut sits on the west side and just under the summit of the Aiguille du Goûter at 3817m 4 to 6hours from Nid d'Aigle.

The most difficult part of the approach is the ascent of the Aiguille du Goûter.

For greater detail of the approach and the route up the Aiguille du Goûter, see the following SP pages: 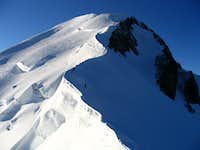 From the Goûter hut climb the broad snow ridge to the summit of the Dôme du Goûter (4303m). A slight descent takes one to the Col du Goûter (4240m). Now continue up a steepening slope, passing the Vallot Hut along the way. The slope turns into a narrower and steeper ridge that leads to snowy ridge bumps, the Grande Bosse (4513m) and the Petite Bosse(4547m). After that the ridge becomes very narrow and leads past the rock of La Tournette (4677m). A final steep slope brings one to the summit.

In most case, route finding is not hard - just follow the deep track and the long line of people. Where the Bosses ridge is very narrow, passing descending climbers as well as inconsiderate people can make this part unpleasant.

The route is known to be very windy but with few crevasses. 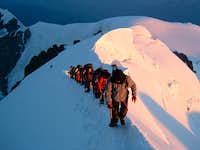 This site has maps of the route.

There are several options for the decent.

1) Back down the Dôme du Goûter route. If you are planning to descend all the way to the valley, bear in mind that if planning to cross the Grand Couloir, it will at the most dangerous time of day. Also note when the last cable car descends to the valley.

2) Down the Grand Mulet route, which is noted for its many crevasses.

3) Down the Italian side on the Gonella route.

4) Traverse over M. Maudit and Mont Blanc du Tacul to the Aiguille du Midi. If planning this traverse, it is best to leave the Goûter hut at about midnight.

If you are planning to descend by a different route from the Dôme du Goûter route, be sure to have studied the maps and conditions carefully and attempt a traverse only in the best of weather.

Rope, harness, crampons, jumars and/or prusiks. Extra clothing and skin protection. Be prepared for any type of weather!