Devil’s Head in the Ghost River area is one of the most recognizable mountains from Calgary on the Western skyline even though it is not the highest mountain.
It's distinctive blocky black shape is very apparent from any high building and particularly from higher elevation areas in the West or the Northwest part of the city. It is prominent in the view if you drive West from Calgary to the mountains on either the TransCanada Highway 1 or Highway 1A through Cochrane. Devil’s Head is topped with a dark vertical 350 m East face, vertical North and South sides and a square top which is unique in this area. The black cliffs stand out in the winter in contrast to the white snow covered peaks around it.

The first nations people in the area named the mountain and feared it enough to make offerings on its ledges. Prominent flat topped mountains that resembled large heads from a distance were thought to be inhabited by spirits or sacred by the Plains Indians. Chief Mountain in Montana and Devils Tower in Wyoming are similar examples.

Devil’s Head was the first and only mountain in the Southern Canadian Rockies to be referred to by name and shape by the first European explorer in the area, Peter Fidler and it was referred to by subsequent explorers. The mountain was a major landmark on the historic map of the prairies and front range mountains drawn on a deer skin hide by native guide "Old Swan" in the late 1700's. See history book "From Rupert's Land to Canada" By Gerhard John Ens, John Elgin Foster, R. C. Macleod, Theodore. There is a copy of the hand drawn map on page 217 of the book which can be viewed online with a search. Mountains that were highly visible and had unique features like Devil's Head, Chief Mountain and Devils Tower were revered by the Blackfoot and used as signposts. The mountain was also used by explorers and travelers as a navigational aid and it led to Orient Point and Devil’s Gap. The South Ghost River flows out of the mountains at Devil’s Gap and the valley was used by early travelers as a conduit into the mountains to access the Lake Minewanka and Banff area.

The Bow River valley to the South later became the preferred access to the Rockies. In 1885 the Canadian Pacific Railroad and later the Trans Canada Highway were built in the Southern Bow River valley. The Ghost area was left undeveloped and was hard to access by vehicle. An attempt was made on Devil’s Head in 1891 when the area was surveyed but it was finally climbed in 1925 by the West Ridge by famous guide Edward Feuz jr. and J.W.A. Hickson. Both of these men made many first ascents of major peaks in the Canadian Rockies. (The Rocky Mountains of Canada – South; Boles, Kuszyna and Putnam. – Out of Print) 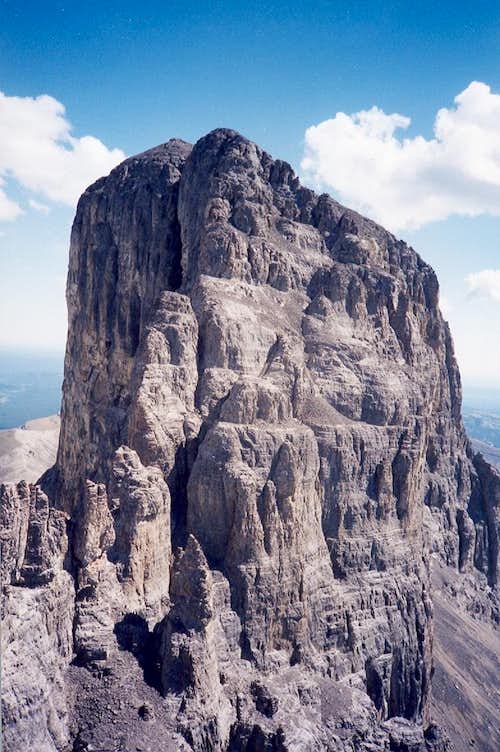 Devil’s Head may be in plain view of over a million people but is still remote by modern standards. The base of the mountain is guarded by a set of cliffs which limit access from several directions and the only road into the area is a poorly maintained commercial gravel road. The last part of the road is best accessed with a 4x4. The original route to the base of the mountain involved following the North Ghost river west past the south side of the mountain to Malamute valley and approaching the mountain from the west. The North Ghost valley has steep walls and five river crossing are required to access Malemute valley. The shortest current access involves three river crossings on foot and then scrambling up a steep side valley to reach the mountain from the SE.

The Devil’s Head access is through a Forest Land Use Zone (FLUZ) which is a protected or managed area but not a park so less restrictions on climbing, hiking, motorized vehicles, parking or camping activities.
Ghost FLUZ
See for details.

Devil’s Head mountain is in a provincial park which is part of Kananaskis Country. See
Don Getty Wildland Provincial Park

for more details. There are no permit requirements to enter, climb and/or park in Alberta’s Provincial Parks

The Ghost area is a remote and undeveloped place. There are no services or telephone/cell communication unless you are on top of a peak. You are responsible for your own safety and probably short term rescue. It will be difficult and slow access for rescue personnel. Satellite Phones are a good idea and be prepared to deal with emergencies or to spend the night.

Cougars and Grizzlies can be more common in the Ghost than in the parks due to its remoteness and location on the front range. Take bear spray during non-hibernation months. There is some avalanche terrain although the frequent warm Chinook winds keep snow levels lower in the front ranges.

For camping rules in the park
Kananaskis camping

Devil's Head from SE which gives a great view of the spectacular South and East faces. See trees in lower right for scale. This is best viewed in full resolution. 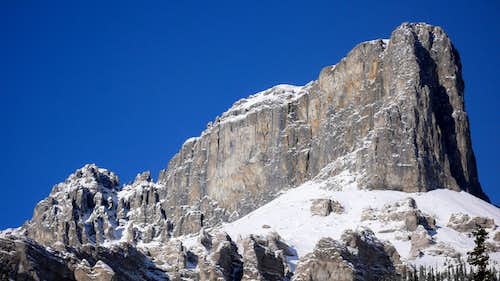 The main season is late spring to early fall although it has been climbed in the winter. Devil's Head is on the front range of the Rockies and is lower elevation compared to many alpine objectives and can be climbed from June until October.

Several river crossings by foot are required which can be quite hazardous or impossible in the spring or in rainy weather. Thunder storms can seriously drop the temperature and rain can turn to sleet or snow at any time of the season.

Overview of Routes from Southside of Mountain. 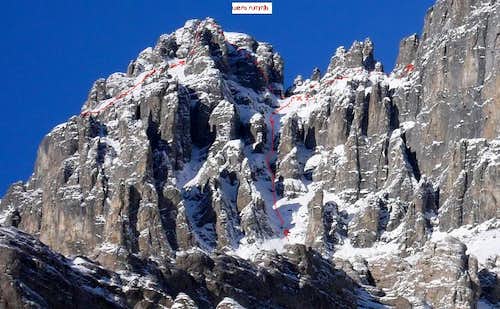 West ridge route.YDS 5.3/5.4
West Ridge 5.4
Access mountain from West from Malamute valley over a ridge to scree slopes which lead to base of upper mountain. Attain west ridge on SW side and route find your way to top of West summit. Downclimb or rap to saddle on west ridge(pinnacles) and then climb west side of main summit by chimneys/gulleys and ledges.
Probably original ascent route.

South gully approach route - Class 4/easy class 5
South Gullies Route
Access mountain from entrance to North Ghost Valley by crossing river on foot(three times) and entering the first side valley on the North ("Valley of the Birds"). Find a trail on the left(West) side which leads up scree slopes/ridges which lead to the base of the South side of the upper mountain. Use gullies on the south side of the West ridge to attain the saddle on the West ridge(pinnacles) and join the west ridge route. There is also an approach route on the lefthand (west)side of the second valley although it is harder scrambling and less well used. 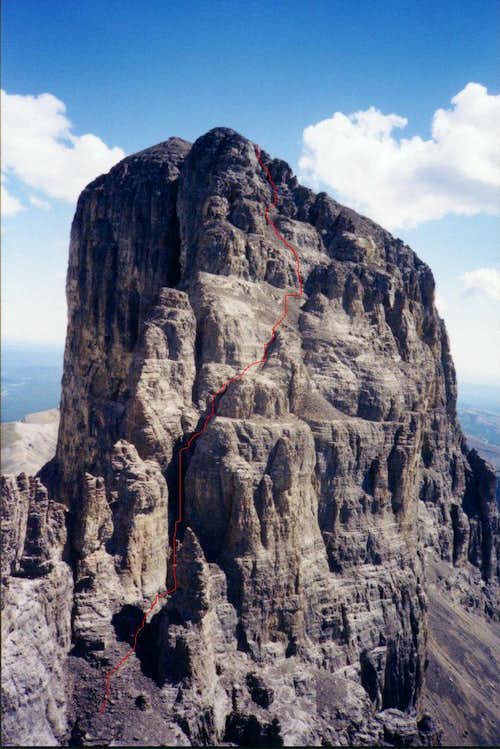 Not actually in Kananaskis Country

Re: Not actually in Kananaskis Country