Fisher Peak in Kananaskis country (Elbow-Sheep Wildland Provincial Park) is not to be confused with Mount Fisher in British Columbia.

Fisher Peak is the closest mountain to Calgary which is over 10,000 ft. It is a prominent peak on the South West skyline and yet it is unknown to the average person. It is the highest peak in the Fisher Range which encompasses the mountains between Calgary and Kananaskis Highway # 40 but it is rarely climbed. There is no easy access to the peak from the Calgary side (East) and the best approach is from the West. The approach involves a strenuous 9 km mountain bike ride on a rugged horse trail covered in large rounded river rock and several creek crossings. From where you leave the bikes, there is an off trail suggested hiking route to a lower subsidiary summit (The Kananaskis Country Trail Guide - Volumes No.1 and No. 2 - Gillean Daffern – out of print) but there is no easy hiking route to the main summit. The scramble route along the NW and summit ridges is described as a difficult climbers scramble in Alan Kane’s Scrambles In the Canadian Rockies 3rd edition. (See Rocky Mountain Books)
Fisher Peak was first climbed in June, 1950 by J.F. Tarrant and party by the NW ridge, now the standard route.

This is a climbers scramble and is one of the hardest scrambles in the book. The crux and two other steps are downclimbed on the way up.
The round trip is about 28 kilometers(17.5miles) and 1570 meters(5,150 ft) of elevation gain. We took 14 hours but there are reports of 10 to 18 hours.

Down climbing the crux by Kane route. We used the nose of the crux to be better than this route. 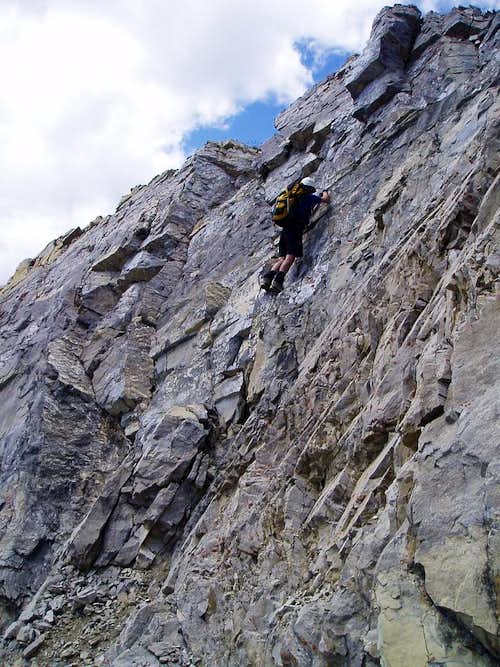 There are many campgrounds in the Kananaskis valley. See
Travel Alberta

has links for all campgrounds in the Kananaskis, the National and Provincial parks as well as the commercial campgrounds.
Kananaskis Country Camping

The season is late spring to early fall. Fisher Peak is lower elevation compared to many alpine objectives in the Rockies and can be climbed from June until October. Thunder storms can seriously drop the temperature and rain can turn to sleet or snow at any time of the season.
The best site for local conditions is the guide conditions site which has regular updates Association of Canadian Mountain Guides

Picture of downclimbs along ridge from the East. 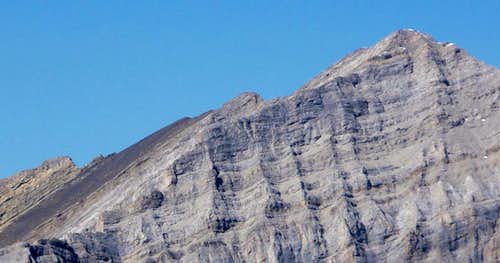 Guide books for climbing, scrambling, Hiking and reference for the area can be purchased through
Rocky Mountain Books


Great picture of Fisher from Mount Bogart taken by Ferenc Jacso which shows how the layers form the downclimbs along the summit ridge. 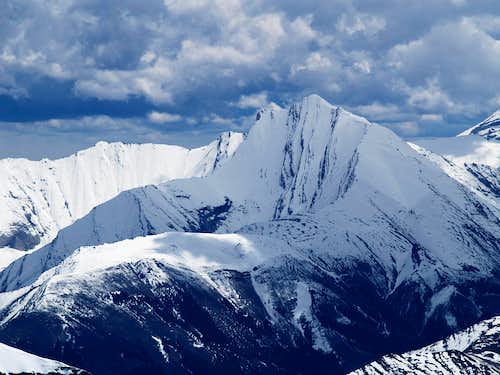 Fisher Peak actually is within a provincial park: Elbow-Sheep Wildland Provincial Park. Here is a link to the Alberta Parks website: https://www.albertaparks.ca/parks/kananaskis/elbow-sheep-wpp/information-facilities/ Generally speaking, Alberta provincial parks and wildland provincial parks impose almost no restrictions on non-motorized users (though sometimes there is a random camping ban in high-use areas (not here)). Also the link for the Kananaskis Country website is out of date. Here is the correct link: https://www.albertaparks.ca/parks/kananaskis/kananaskis-country/

You're welcome! Another thing: you mention Gillean Daffern's Kananaskis Country Trail Guide is out of print. It was, but its five full color volumes are now very much back in print: see https://rmbooks.com/book-author/gillean-daffern/

Yes and I have all 5 volumes. The Daffern "hike" route to the sub peak of Fisher was a steep scramble up a rubble slope with no trail versus a hike. It was left out of the new volumes. The best access now uses the north fork of the creek and the NW drainage to attain the ridge saddle and is mostly a hike to that point. There is also a new long obscure route to Fisher summit that uses steep scree on the S or SW side that comes out near the summit so no climbing is required.