Devil's Paw is an international boundary peak between the United States and Canada. The West side is in Alaska and the East side is in British Columbia.

Devil's Paw sits along the crestline spine of the Coast Range, in the middle of the Juneau Icefield. The Southern border of the icefield falls off in a number of glaciers into the Taku River Canyon.

This granite massif has several peaks along its rim. Two glaciers fill the relatively flat basin below the massif, and another falls off to the North side, as well as the East side, in Canada.

The elevation of the highest peak in the massif is 8,584 feet.The icefield elevation at its base is 5,000 feet. So the massif itself is 3,584 feet of rock. 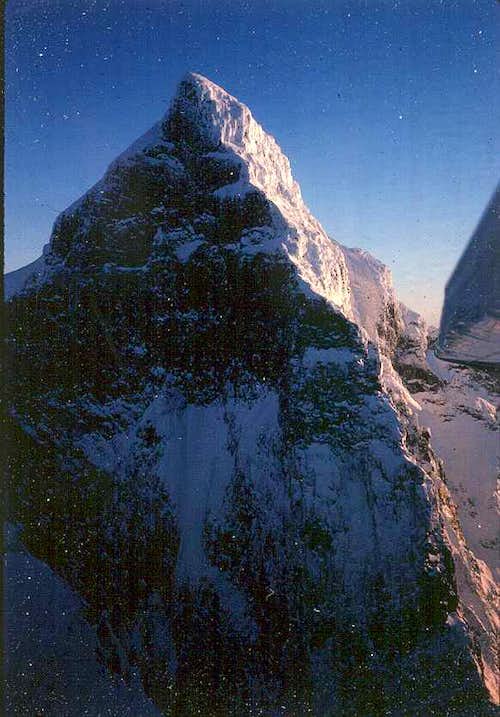 A) The SW Couloir. 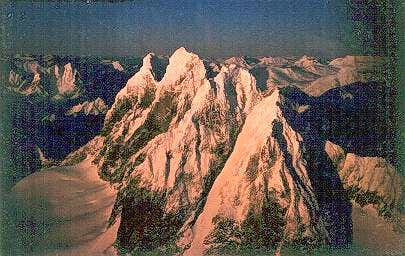 The SW Couloir is probably the easiest, quickest and safest route. (That is, "safest" when not top-loaded with cornices or filled with snow that could avalanche.) It is closest to a potential skiplane or helo landing zone and camp.

The SW Couloir provides access to a saddle just below the South prominence and one of the middle prominences. However, click on the photo and look carefully at the last pitch, which seems to have a severely steep face in this winter photo.

B) The South Buttresses

1. South Buttress Couloir.
A narrower and steeper couloir ascends the Southwest Buttress. This would have noon-time sun, but would be cold in mornings and afternoons. 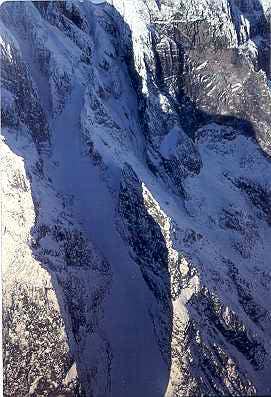 2. Southeast Buttress Ridge.
This route would be more free of avalanche danger, by following the high line. 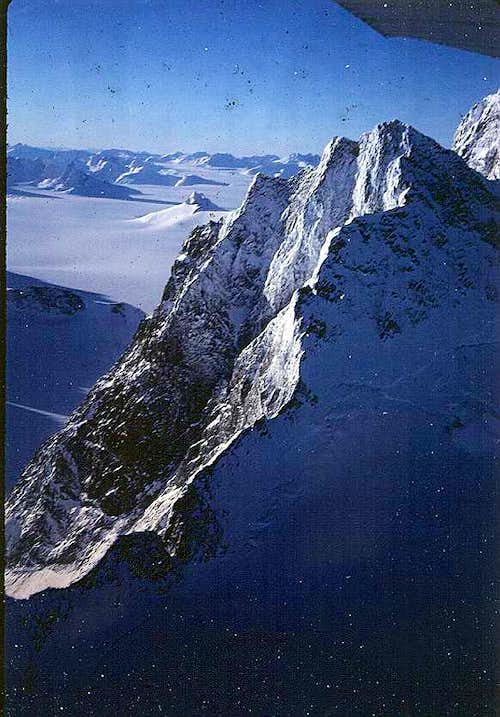 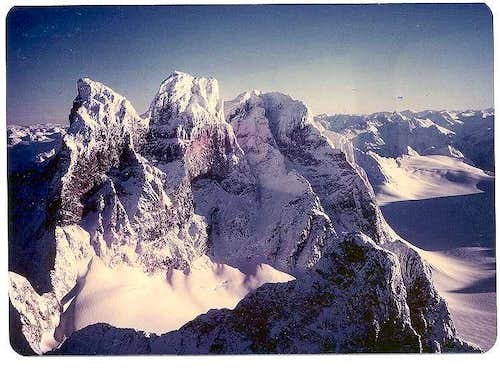 The West Face has two or three radical walls. They have the most afternoon sun, and would provide interesting route finding and aid challenges, even for expert climbers. 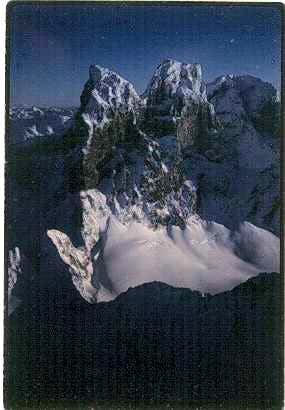 The true summit of Devil's Paw appears to be the peak just South of the North Peak. For the hardcore climber The North Face would be a longer and more difficult climb than the others if climbed from its true base, down on the glacier at its base on the north side. The top of the North Face also appears to be overhanging in its final pitches.

Michael's Sword is a nunatak spire connected by a curving blade of rock. Its elevation is 6,840 feet. From the icefield elevation of 5,000 feet, the spire itself rises 1,744 feet. 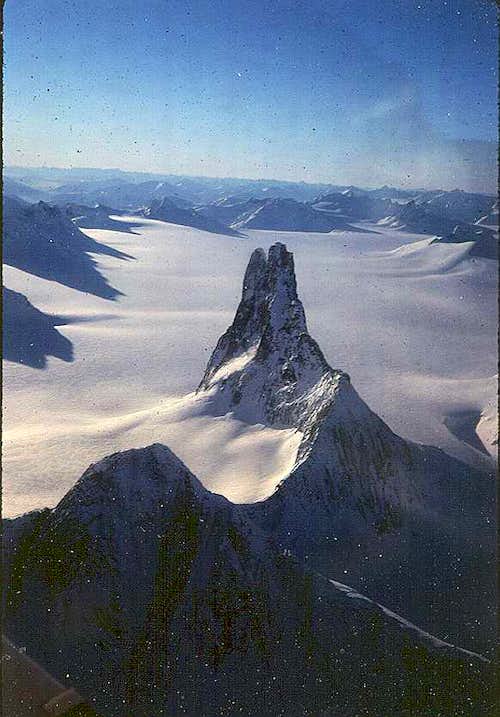 The long view out to Michael's Sword. 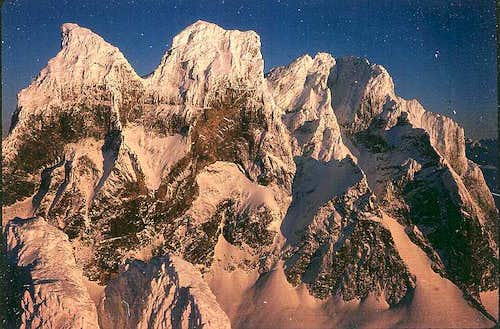 In good weather this would be an outstanding place to spend a week or two, climbing, and skiing out to various other spires and icefalls. 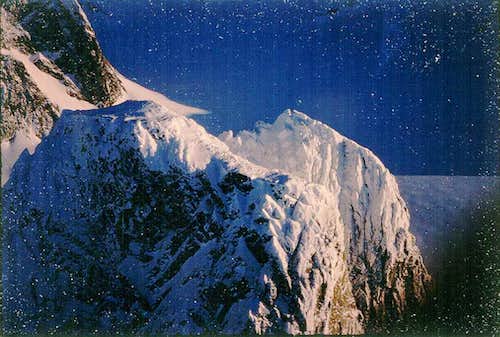 In bad weather it could be socked in with windy storms for weeks. Even in clear winter weather it can blow 200 miles per hour across here for days. 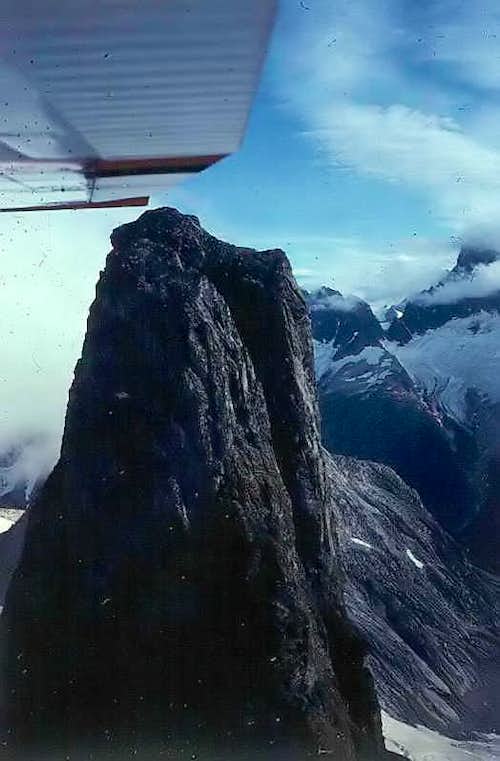 A nunatak spire in the general area of Devil's Paw.Probably Nelles Peak, to the NW.

A skiplane can be chartered in Juneau for landing in the snow basin near the peak. Hiking up the 3,000 foot high slopes from tidewater is also possible, followed by a ski trip of a multi-day ski trip across the icefield.

However, the snow can be treacherously deep and heavy for a skiplane to land. Helicopter would be better.

Helicopters are available in Juneau. A helo on inflatable float pontoons is the best choice. The weather for pickup still has to be good for a helo to get in for landing and take-off for the departure as well. Expeditions should be prepared with extra food for a week in case the aircraft cannot get back in due to weather.

An alternative would be to charter a boat on the Juneau docks and motor down Gastineau Channel, to the open straits to the East of Admiralty Island. From here one can turn East up the Taku River, and navigate the glacial silt shoals to a slough mouth opening, and work one's way up to a glacier for direct access up the steeps to the icefield.

One such approach might be Twin Glacier Lake. Two glaciers descend off the icefield around a central mount, entering a lake in the forest. The lake is fairly easy to access from the river, up a trail and across a bridge.

The Taku Glacier to the Taku Icefall might be another route, but the shifting sandbars were blocking the way when this author tried it in 1978.

Crossing the Canadian border, at least by private bushplane, requires registration beforehand with Canadian authorities. Whitehorse was the regional office for registering and first landing in the 1970s.

For a more detailed discussion of land use permits, see the Alaska Coast Ranges page.

For access from the Alaska side, agencies of local, state, and federal offices, as well as Native corporation landowners, are all in Juneau. That is the town through which all air flights and ferry docks are located, as well as access via helicopter.

A party could fly in from Petersburg, south of Juneau, but there would be fewer options, and the distance is further, so would be more costly in charter time. The advantage would be that one could climb from Petersburg up Devil's Thumb on the Stikine Icefields, and work with the same flight operator immediately, rather than travel by jet or ferry to Juneau and contract with another flying service.

As one gets farther inland from the coast the weather gets drier, so camping is more reasonable than in the coastal rainforest. Side canyons of rivers farther up the Canadian side should be fairly dry.

Thick vegetation of riverside marshes and sloughs, and even forests, can obscure travelers from moose and bears (both black and brown/grizzly) until one is right on top of them. Startling a grizzly bear is a near-guarantee of attack. So walk loudly and carry a big stick - or a big gun - 12 gauge with lead slugs, or a .338 Magnum, or .375 H&H Magnum with 225 grain cartidges or heavier, to keep speeds low to avoid deflection from thick undercover branches. (Tough gun controls in Canada. Check with fish & game authorities on regulations and allowable/effective protections against bears during your climb approach and exit trip. Canada might not allow guns across border.

Avoid that issue by flying up to the icefields directly, and concentrate on adequate climbing gear, food, radios and emergency extraction procedures. Have Fun!