Disappointment Peak is a high peak of the Teton Range in Wyoming. It is located less than one mile SE of the Grand Teton in the heart of the range. Though its summit is obscure by immediate standards, climbs of six of the ten highest peaks in the range begin by traversing its lower slopes. It is a focal point for the gaze of millions of tourists and is hiked, in part, by thousands annually. This is because it stands directly in front of the Grand as viewed from the valley floor of Jackson Hole. So much so that to the uninitiated they appear to be one and the same. The summit provides an astonishing and dizzying viewpoint of the layout of the core peaks of the range and offers a goal when time restricts. Its southern buttress, (circumnavigated by those heading to the Grand, Middle, South and Nez Perce) is the north rim of Garnet Canyon and holds over a dozen multi-pitch routes of various severity on high quality rock (including the most difficult in the range at III, 5.12c). Most of these technical routes reach the Disappointment Plateau rather than the summit. The east couloir is a classic steep snow climb in early season and the key to extreme glisse descents which drop 5000' from the summit to the valley floor. The East Ridge (II, 5.6) is considered one of the finest routes of its grade in the range. The North Face (IV, 5.8) drops precipitously to the Teton Glacier moraine. (Photo of Middle Teton, Disappointment, and Teepe Pillar, credit: juh33). 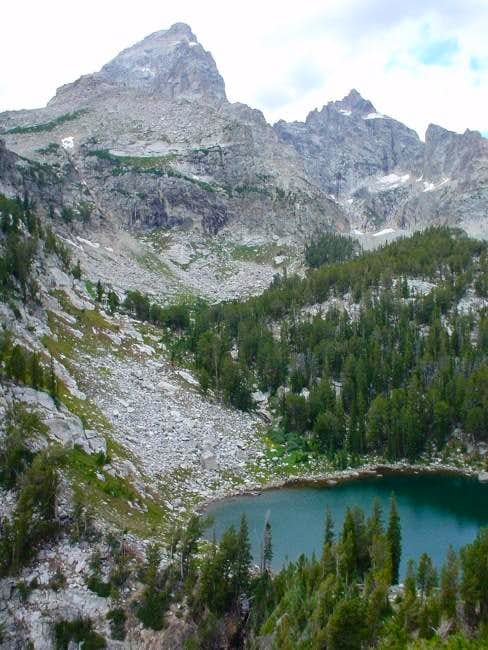 From Moose, drive on the park road for 7 miles directly past the peak to the Lupine Meadows trailhead road.
From Moran Junction, drive highway 89 N and into the pay part of the park. Drive 4 miles and turn left across the dam. It is 13 miles to the Lupine Meadows trailhead turnoff, just past the bustle of Jenny Lake. If you're not craning at peaks on this drive, it's a bad day to climb.

Photo of Surprise Lake and Disappointment in front of Grand Teton and Mount Owen. Credit: mrrich.>>

This peak is managed by the Grand Teton National Park. Park Service rules, fee systems, and reservations apply. Entrance fees have (frustratingly) reached $25 per vehicle. There are no mountaineering permits required for Disappointment unless you are overnighting. If so, then you need to stop at the Jenny Lake Climbing Ranger Station and check for availability of permits. You may want to stop there anyway - the climbing rangers are friendly and there is route condition information as well as route photos. Because it is a National Park there are many campgrounds nearby and because it is a National Park they're usually all full. The Bridger-Teton National Forest is not far and is a backup between Summer Solstice and Labor Day. Another option for American Alpine Club members is the Grand Teton Climber's Ranch, run by the AAC.

Summer climbing season in the Tetons is July-September with snow lingering on the higher routes into early August. Snow climbs are generally in good condition from early May to late June although May can be somewhat cloudy, if not snowy. The range receives the largest snowstorms in the Rockies with 500" in one year (late October to late May) at this location not being unusual. Peak snow depths occur in late March in the valley and early May on the summits with the heaviest storm month being January. A late summer snowstorm is traditional between the last week of August and the second week of September. Some years it signals the beginning of a snowy autumn. Other years there is a great "Indian Summer" in the Hole with clear, crisp weather lasting through October. Route conditions vary in the exposed Tetons from [i]week to week[i] and very much from year to year. The climbing rangers are very helpful in determining the proper gear required at the time of your visit (i.e., crampons and axe).
Local weather and avalanche forecast.
Web Cams pointing at the peak.

The rock is made up of the usual Teton mix of gneiss, migmatite and quartz monzonite, with chossy rock being adjacent to the beautifully solid.
The best known classics in Garnet Canyon:
Irene's Arête - III, 5.8
Fifth Column - II, 5.9
SW Ridge- II, 5.5
Grunt Arête -II, 5.6, A1
West Arête - II, 5.9
The Open Book- III, 5.9
Satisfaction Buttress- III, 5.9
Note: These are traditional ratings for the buttresses and many climbers find them to be sandbag by a full point.

Traditionally, the Grand Traverse includes successive climbs of Teewinot, Owen, Grand, Middle, Nez Perce, South (including the points of Gilkey Tower, Spalding, and Cloudveil Dome) but does not include the independant summit of Disappointment because it is in the center of the circle. Any information for a traverse that included Disappointment will be added here (click on Additions & Corrections).

Disappointment is guided by Exum and Jackson Hole Mountain Guides.

Latitude and Longitude are slightly off