The Enclosure is a small but noteworthy point in the Teton Range, located on the west side of the Grand Teton. So named because of a small horseshoe-shaped "enclosure" at the summit that was discovered by early Teton mountaineers, it is believed that this structure was built by Native Americans to serve as a shelter or as part of visionquest rituals (lending a name to visionquest couloirs on the northwest flank).

Technically, the Enclosure is the second highest point in the entire Teton range. But, at a mere 80 feet of prominence, it is, by almost all standards, insufficient to distinguish itself as an independent summit. Likewise, It is rarely an independent objective. Those who do summit the Enclosure generally choose to do so as a quick tangent from their Grand Teton trip. Despite these points, The Enclosure is heavily involved in debates about early Grand Teton climbing history and is also the home for a number of worthy Teton rock and ice climbing routes (some of the more difficult in the entire range).

The climbing history of the Grand Teton and The Enclosure is extensively detailed in the Jackson/Ortenburger  A Climber's Guide to the Teton Range. The first claim of a successful ascent of the Grand Teton came from the team of Nathaniel P. Langford and James Stevenson on July 29, 1872. This was some 26 years before the well-known summit team of William Owen and Franklin Spalding successfully gained the summit in 1898. However, many agree that the Langford/Stevenson teams' descriptions and sketches match the summit of The Enclosure, and not the summit of the Grand Teton-as they had claimed, though this is not totally conclusive. The safest stance is to assume that Langford/Stevenson might have successfully summited the Grand in 1872, and Owen/Spalding definitely did in 1898. 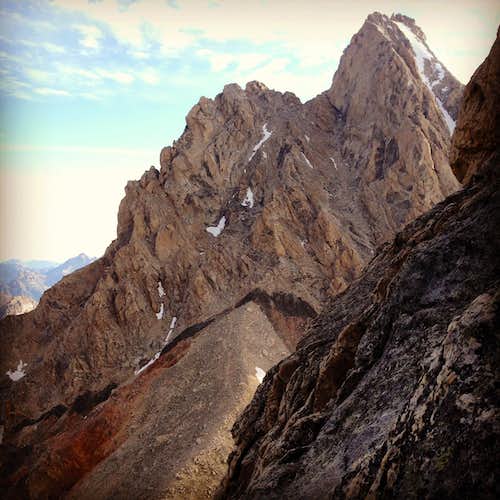 The southern aspect of both the Grand Teton and The Enclosure, as seen from the Middle Teton's North Ridge route.

The Enclosure can be approached from basically any direction. Valhalla Canyon to the northwest, the Grand Teton itself to the east and the lower saddle to the south all provide means of access. The easiest means of ascent is via the same approach as Owen Spalding, from near the top of the upper saddle.  From here, the summit is accessed by a short and obvious scramble to the west.

Numerous routes reach the summit of the Enclosure, though most see somewhat limited climbing activity compared to the routes on the Grand Teton nearby.  Nevertheless, noteworthy routes include: The Black Ice Couloir (IV, AI3+, 5.7) Considered an American Classic, this route ascends the steep northwest couloir and is perhaps the best known of the Teton ice climbs. Lookin' For Trouble (V,5.11,A3) Possibly the hardest route completed anywhere on the Grand Teton massif.  South Face, Jim's Big Day (III,5.10-) This difficult route features some of the best rock and most scenic climbing in the range.
The majority of routes from the north and west involve aid climbing and ice.  A Climbers Guide to the Teton Range should be consulted for more information on these routes, but the reality is that by the time you're interested in making the Enclosure a specific objective (particularly from the Valhalla side) you'll already own this book.

The simplest and most common approach for the Enclosure is located on its east side, near the upper saddle on the Grand Teton.  This route is highly visible from Owen Spalding and vice verse.  It is an easy 3rd class scramble to the summit and only requires 15-20 minutes or less from the upper saddle. From about 100 vertical feet below the upper saddle, simply follow the path of least resistance to the west up the southeast face of the Enclosure.

Fortunately, there is little red tape in the Tetons.  The only permits required of Teton mountaineers is for overnight backcountry camping. These permits are free (but limited) and can be obtained at the Jenny Lake Ranger Station, which is located only a few minutes north of the Lupine Meadows trailhead turnoff.

Climbing activity in the Tetons reaches its peak during mid to late summer, but extends throughout the year.  In the summer months it is generally wise to be on the descent by early afternoon, thus minimizing the risk of exposure to the frequent afternoon thunderstorms that occur in the Tetons.  Weather can be somewhat unpredictable here, so it's a good idea to be prepared for a variety of conditions. 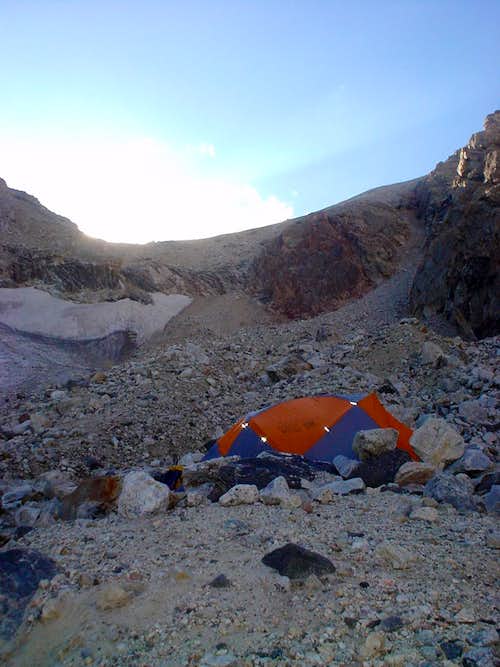 The closest camping is at the designated campsites in the lower saddle or in the moraine campsite area a few minutes east of the saddle. Other camping areas are located along the trail to the lower saddle (Petzolt Caves, Garnet Meadows). Camping is permitted in some areas in Valhalla canyon for those wishing to approach from the north and west.

mysterious granite slabs on The Enclosure

Interesting reading about The Enclosure (and early picture of mysterious granite slabs) about 2/3 of way down in this article: http://www.cr.nps.gov/history/online_books/grte2/hrs16.htm