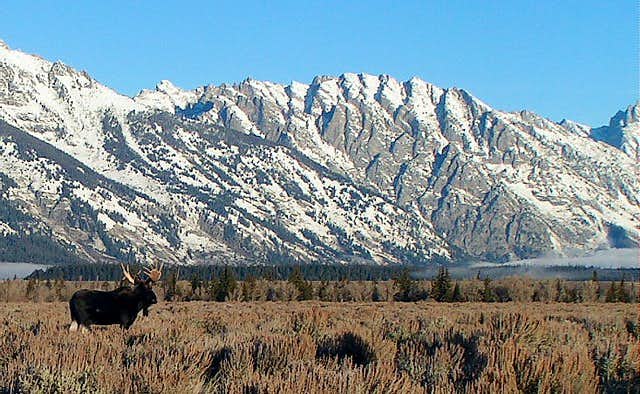 Photo by Biglost
Mount St. John is the highest point on the divide between Cascade Canyon and Paintbrush Canyon in the Teton Range. The mountain is visible as a serrated ridge on the north side of Cascade Canyon opposite the high central peaks of the range. The summit of the mountain is the highest of many granite towers that are nearly the same height along the ridgecrest.

Orestes St. John
Mount St. John is named after Orestes St. John, who was one of the major geologists with the Hayden Survey that ended in 1883.
more history...

Read more about early exploration of the Teton Range

Detail of a St. John sketch of the western slope of the Teton Range as viewed from the top of Freds Mountain, from the Eleventh Annual Report of the Hayden Survey, 1879. Notice that the Grand Teton is referred to as "Mount Hayden".
Click for larger image:

Detail of a St. John sketch of the Teton Range as viewed from the headwaters of the Gros Ventre River, from the Twelfth Annual Report of the Hayden Survey, 1883.

Mount St. John is a mountain in a very central location to public access, yet the higher portions of the mountain are rarely visited in comparison to the canyons and lakes that surround it. The major reason for its solitude is the due to the fact that the main trail into Hanging Canyon on its south side is both unmarked and is not maintained. While Paintbrush Canyon, Cascade Canyon, and Jenny Lake are heavily used areas, Mount St. John stands accessible but silent. Many attractive granite towers surround Lake of the Crags, including Symmetry Spire, Rock of Ages, and the Jaw.

To access Hanging Canyon and Lake of the Crags, take any of the unmarked trails that head to the west from the Jenny Lake Trail between Cascade Canyon and String Lake.
Thanks to D Smith for developing the SummitPost Mountain Map Generator

Mount St. John is administered by Grand Teton National Park. A $20 7-day entrance fee is required to enter the National Park. No backcountry camping areas are located on the mountain. It is advisable to register at the Jenny Lake Ranger Station before you climb. However, they will not check if you

Most climbing is done in July through September. Early season climbers will encounter steep snow.

There are no backcountry camping areas directly on the mountain.

Camping in the National Park
Backcountry Camping (pdf).   Paintbrush Canyon runs along the north side of the mountain.
Lodging in Jackson, WY

Also see this live webcam (Java applet) or this static image from Lost Creek Ranch. Mount St. John is the high point on the right.

Mountainweather.com has a forecast page for the Teton Range.