The view of Static Peak from Jackson Hole; Static is the smaller peak on the left, and the peak to the right is Buck Mountain. Photo by Judd97.

This page was already on SP but was lost when the owner asked for his account to be deleted.

Of all the major peaks of the Tetons-- as in the high ones along or near the crest of the range-- only a few have walk-up routes. For people interested in a gentle introduction to the summit country of the Tetons, there is no better mountain than Static Peak, for it is in the heart of the park, not far south of the "great" peaks such as the Cathedral Group (Grand Teton, Owen, and Teewinot) and its neighbors.

Static Peak is easy to see from Jackson Hole but easy to ignore, for it appears as a minor bump next to Buck Mountain, which towers beside it. The peak seems to be named for lightning strikes, and it, though an easy peak to climb, is, like any other peak, no place to be in bad weather. Never forget that lightning striking an exposed hilltop is just as deadly as lightning striking the summit of K2!

The view from the top, as could be expected, is excellent. Three sights stand out-- the Grand Teton to the north, Buck Mountain directly west (so close and massive that it seems larger than the Grand even though it is almost 2000' lower than the Grand), and Timberline Lake directly below on the north side. Timberline Lake often stays at least partially frozen late into the summer and is fed by some permanent snowfields that resemble small glaciers. 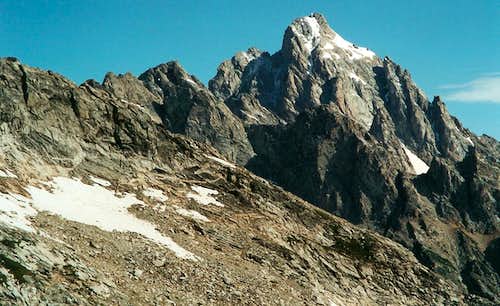 View of the Grand

Although the ascent of Static Peak is technically easy, it is not easy as an aerobic exercise, for the total climb is about 5300' and covers approximately 19 miles RT.

Follow an excellent trail network (with good signage, too) to Death Canyon and from there to Static Peak Divide. People frequently see moose and black bears along this hike. 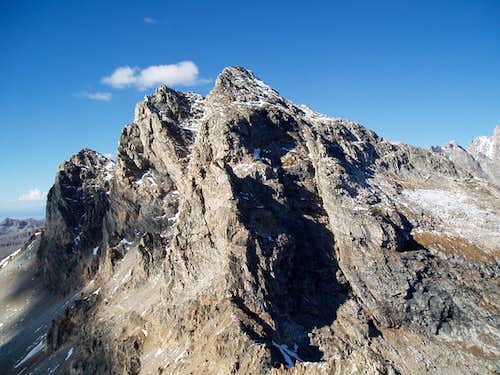 View of Buck Mountain-- by wyopeakMike

The trail to the divide begins near the ranger cabin on Death Canyon; the Death Canyon Trail continues on to Fox Creek Pass and Death Canyon Shelf, one of the greatest trail walks in the range-- 3 nearly level miles with unobstructed views of the high peaks all around. On hot summer days, there can be throngs of people splashing in the cool waters of Death Canyon, but once you head off to Static Peak Divide, the noise disappears and you begin to renew your bond with the mountainous world. You will probably still encounter some people, but they will be realatively few and will be backpackers and hardy day hikers.

It is 8 miles to 10,800' Static Peak Divide, and the trailhead-to-divide elevation gain is 4000', but there is a catch-- near the start, you must climb and then lose 400' en route to Phelps Lake, which means you have to climb again near the very end. South of Static Peak Divide, the trail is narrow with long dropoffs in some places, and people who are strictly hikers may feel exposed and unnerved.

From the divide, it is a steep but easy walk of less than half a mile along a use trail to reach the summit of Static Peak. The elevation gain is just over 500'. 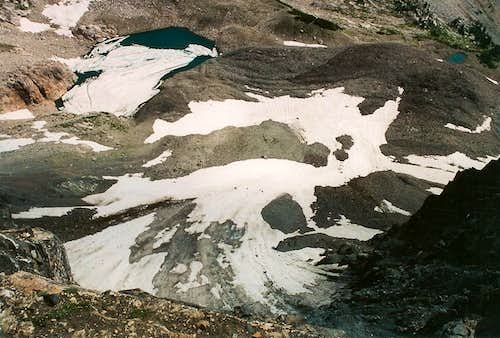 From Moose Junction in Grand Teton National Park, head south on the Moose-Wilson Road for a few miles and then turn right onto a road that leads about a mile to the trailhead for Death Canyon and Phelps Lake. These roads are paved but are narrow and a little rough in some places.

Moose-Wilson Road can also be accessed from WY 22 east of Targhee Pass via WY 390 and the Granite Canyon Entrance Station.

Details
Good for both Grand Teton and Yellowstone national parks: $25.00 per vehicle; $12.00 per person for single hiker or bicyclist; $20.00 per motorcycle.

There are other fee structures and options; please see the park website for full details.

The Static Peak area is closed to use December 15-April 1. I do not know why.

The closest developed campground is at Jenny Lake, which is around 15 miles north along the park's Scenic Drive. This is the park's most popular campground; sites fill early in the day, and you cannot make reservations. Across the valley is Gros Ventre Campground. This is a large campground, and, although the drive to the TH can be more than 30 minutes, the campground rarely fills. Reservations are available at some of the other campgrounds in the park; please see the park website for more details. The website also has links to lodging in the park, which tends to be quite expensive.

If you want to make this peak part of a backpacking tour, you will need backcountry camping permits. See here for details.