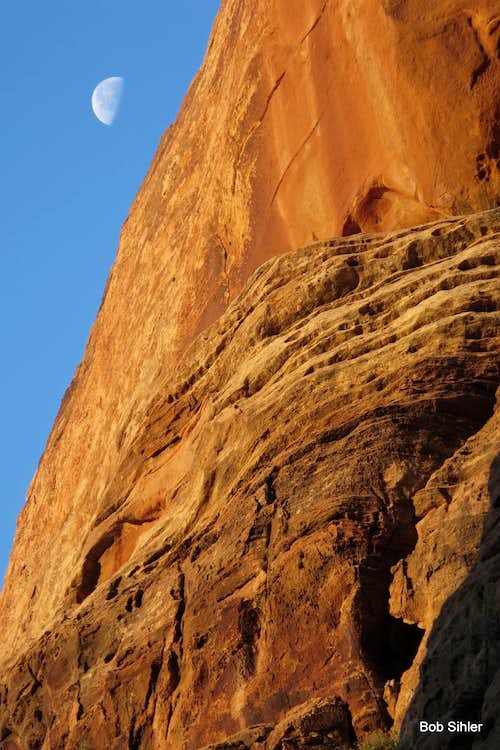 Dawn and Moon from the Chute
Less in stature and grandeur than their higher neighbors, and so dwarfed by the West Temple as to seem almost completely indistinguishable from some angles, the Three Marys are still part of the spectacular group of Zion peaks known as the Towers of the Virgin.
Consisting of three peaks aligned in a west-to-east orientation, the group's summits are called the West, Middle, and East Marys or the Left, Middle, and Right Marys.
West Mary is a highly technical objective separated from Middle Mary by a deep notch. The Middle and East Marys, though, can be climbed together via a scrambling route that goes at 5.0-5.4 depending on exactly what you do (3-4 very short pitches of Class 5 rock, so this is more a technical scramble than a true technical climb). This page covers that route. There are technical routes on the Marys as well. For information on them, see the SP pages for Middle Mary and Right Mary.
The summit views of the West temple, the Towers of the Virgin, and Zion Canyon are nothing less than incredible. Don't let the Marys' proximity to Springdale fool you into thinking they aren't worth climbing.

In Springdale, turn west onto Lion Boulevard (about half a mile before the entrance to the national park) and drive about a mile to a gate before the O.C. Tanner Amphitheater, a property of Dixie State University, which is a public college based in St. George in Utah. Park at a turnout by the gate.


Climbing both peaks entails around 4 miles RT and about 2500' of elevation gain.

From the parking area, there is a full view of the Marys and the approach to them. Notice the one spur that offers a reasonable way up to the base of the peaks. You need to get to that spur. 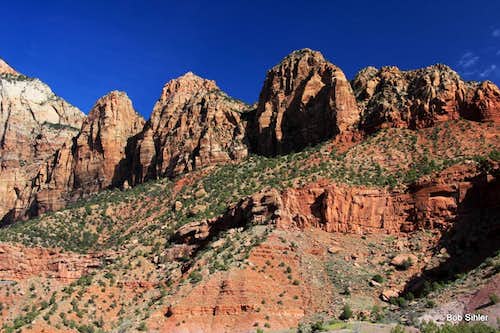 The Three Marys
First, though, you need to make a decision. If you want to avoid any worries about trespassing issues, head a few hundred feet north from the parking area and cross the park boundary, and then work cross-country over uneven but generally easy terrain to the spur.
Or, hike up the road and depart for the spur just before the amphitheater itself. Many people seem to do this, but I do not know about the legality or if the owners and staff even care. When I started out, it was before dawn and no one else was around. On the way back, an employee was present and definitely saw me on the road, but he never communicated to me in any way.
From below, the spur doesn't look very appealing-- ridiculously steep and dirty despite the short length (less than a mile). And it isn't much better once you are on it. Footing is often bad because of sand or loose rock. But you have to do it, so just suck it up and get it over with. 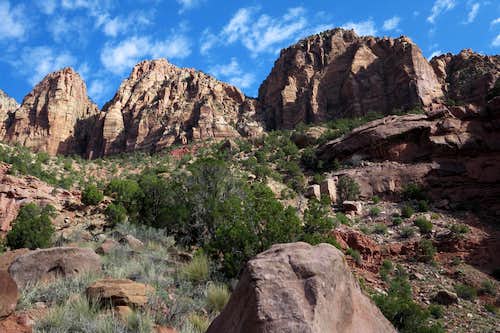 The Three Marys from the Spur

At the base of the peaks, hike right to gain the bottom of an obvious chute just east of East Mary. Climb the chute to a saddle between East Mary and a lower subpeak to its east.
It's in this chute that you encounter the cruxes of the route to East Mary. There is also a good deal of Class 3 and 4 scrambling in the chute.
The first crux is a 12' 5.2 face just after a short, exposed traverse across a slab. Above this pitch is a sturdy tree you can use as an anchor if you rappel this on the way back. 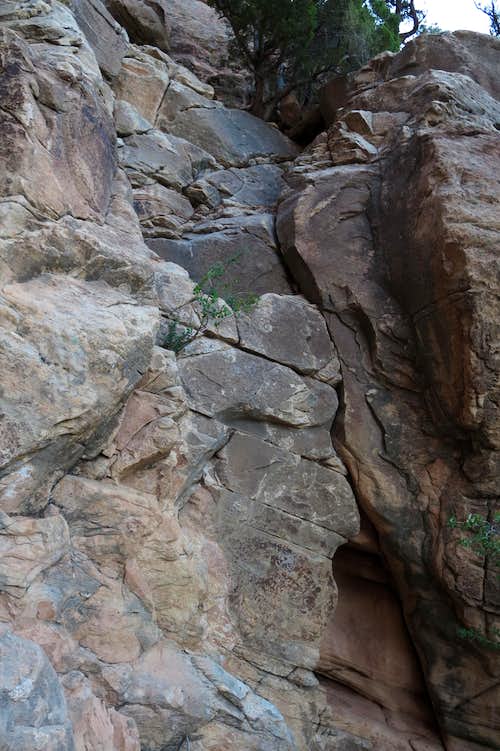 First Class 5 Pitch
The second crux comes soon after the first. It is a 12' chimney that I've seen called 5.4, though I think it's a little easier than that. However, if you don't like the looks of it, look for another chimney around the corner to the left. Also about 12', this one is estimated at 5.0. When I ascended, I thought this looked harder than the 5.4 and did the 5.4 instead, but I downclimbed it on the return and actually thought it was more like Class 4. In any event, it is less challenging than it looks. There are trees nearby that would make good anchors for anyone wanting to rappel rather than downclimb these pitches on the descent.
When you reach the notch, look for a chute heading up and left. Follow it up for about 100' and then meander your way to the top. 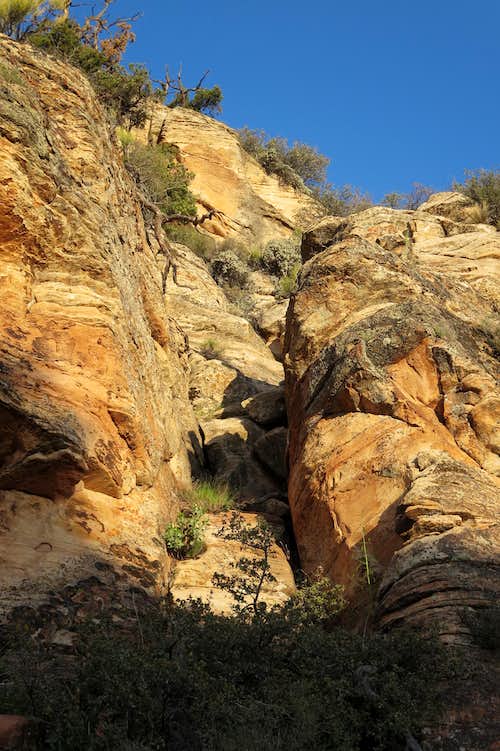 Chute from the Saddle

Now descend to the notch between East Mary and Middle Mary. Did you remember to wear pants instead of shorts? If not, expect to bleed a little; there's a lot of brush to deal with getting down there and as you begin to ascend to Middle Mary. 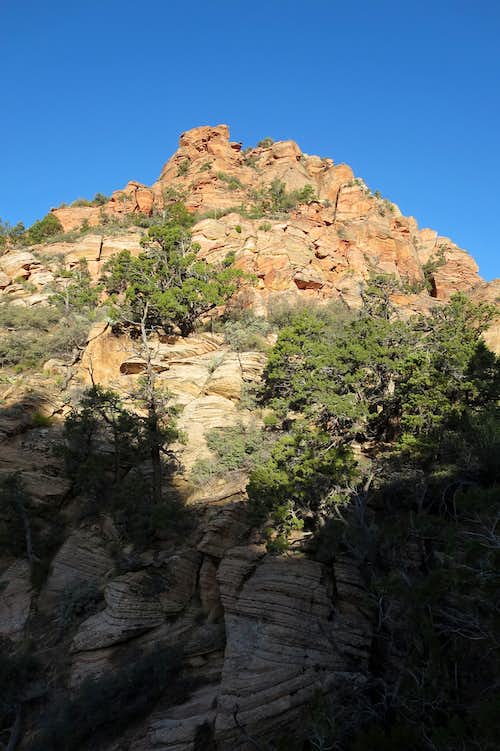 Route up Middle Mary
Next, summon your patience and your route-finding skills. You're heading up the south ridge, but it isn't a beeline unless you want to scramble a lot of Class 5 rock.
This is one of those routes where I won't try to describe exactly what I did; first of all, I don't remember every detail, and second, there were enough course corrections to have made it difficult to present in good detail, anyway.
Just as I thought I was cruising along and would reach the summit in a few minutes, I reached a spot that was a no-go due to a combination of difficulty and exposure; neither by itself was a deal-breaker, but together they were.
So instead I went back a little a descended a bit to my left until I found a short, exposed traverse to a ledge below a corner that then let me scramble up to easier ground. In an out-of-print guidebook I own, this spot (I think from the description that the author found the same way) is estimated at 5.2. Personally, I would call it Class 4, but one should note that Class 4-5.2 is often indistinguishable and that the author and I may not in fact have gone the same way.
The picture below shows the spot about which I am talking. 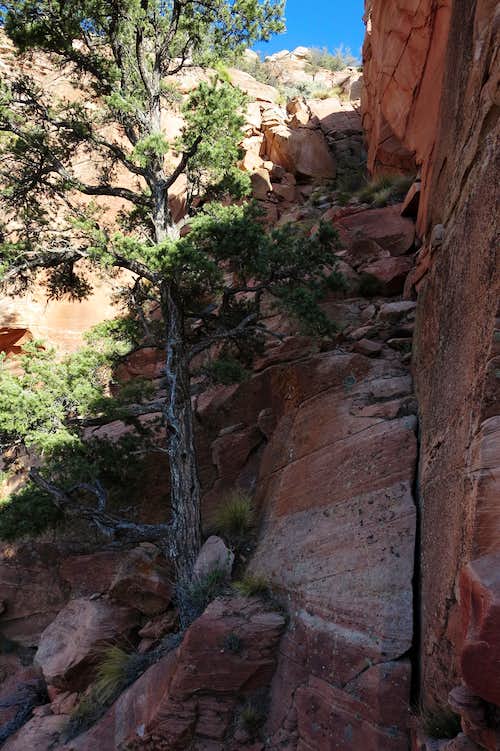 Route Information
The summit block looks daunting from the approach, but there's an easy way up from the other side. 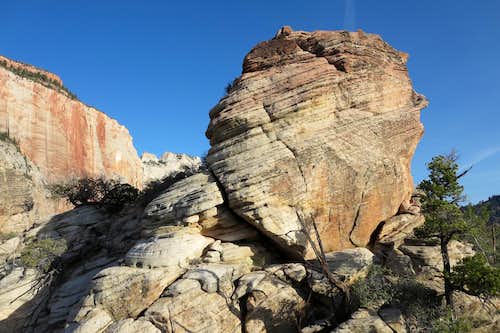 
Approach shoes or hiking boots, 30m rope if you plan to rappel the Class 5 pitches.