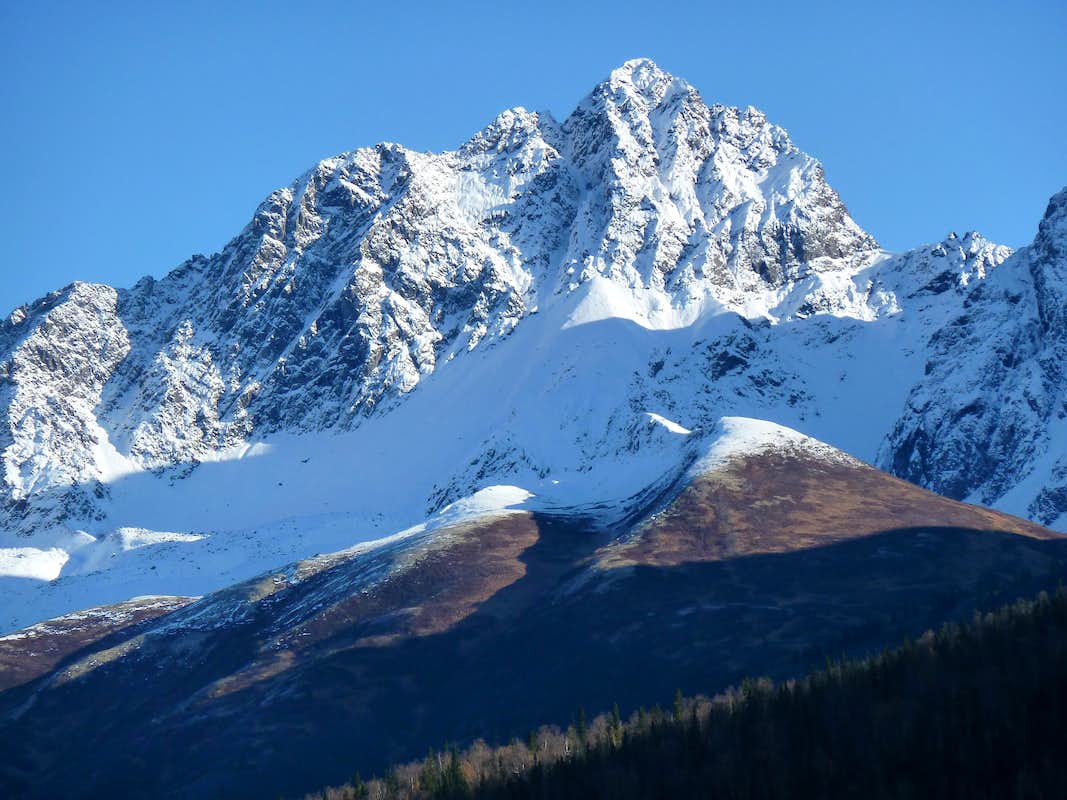 The Twin Peaks rise nearly 6000 feet directly from sea level in a mountain front reminiscent of the Tetons. The name notwithstanding, there are three twins: East Twin, West Twin, and Goat Rock. East Twin is both the highest and the most accessible of the group, and it offers a superb grandstand over the Mat Su Valley far below, fjord-like Eklutna Lake, and the ice-bound crest of the Chugach Range farther east.

East Twin sees only two or three dozen ascents a year. This is fortunate because most parties use the main south gully route, which (due to rockfall danger) is not a route you’d want to share with another party. The Twins from Palmer Hayflats on their north side. East Twin is the highest summit; West Twin and Goat Rock are the pair of lower summits to the right. East Twin as seen from the south, near the trailhead. The trailhead is so pleasant you may not want to leave.
East Twin is climbed from the Eklutna Lake trailhead at the outlet of Eklutna Lake. Take the either the Eklutna or Thunderbird Falls exit from the Glenn Highway (Alaska Highway 1) about 26 miles north of Anchorage, and follow signs to Eklutna Lake. Park near the boat launch.

Main south gully, cl. 3-4: This is the regular route up East Twin. From multiple ascents over a span of 30 years, I can report that it has changed over time, with some of the rock steps being filled in by steep scree, then denuded again. The changes may explain why the one published guidebook description I have found is highly inaccurate. The description you see here corresponds to conditions in 2015.

From the parking at the end of the Eklutna Lake road, elevation 900 feet, follow the prominent signs for the Twin Peaks Trail. This trail climbs 1800 feet in 2.6 miles, passing one park bench and continuing to a second one at treeline. It’s on an old road bed, which makes for excellent footing and fast travel. Approach illustration--see text. The uphill angle of this photo greatly foreshortens the upper part of the mountain.
At the end of the trail, sit on the park bench and size up East Twin. There’s a big central gully, which is your eventual route, but to avoid brush you may want to swing way right (B in the photo at right), climb 2000 feet of tundra, and then traverse into the gully quite high (C in the photo).

OK, get up from the bench and get back to work. Start your ascent by dropping to the creek on a good path and join the little path on the far side (A). After 250 yards, you may see a small branch to the left, which makes an acceptable route through the worst of the brush. Otherwise, follow the main path for another 10 or 15 minutes before turning left toward the peak. It's a long way across to that central gully, which will be hidden from you till you get to its steep rim. Get into the south gully high, but before the cliff bands begin. Climb the gully on boulders for a few hundred feet until it turns to mostly scree, just before it makes a big bend to the left.

Here you can continue up the gully, but this is hard, miserable work due to the scree (if you do this, bear left when the gully forks). A much better option is to bypass the gully's midsection by scrambling up sloping ledges to reach the more exposed but pleasant class 4 climbing on the rocky ridge to the left. These variants rejoin on the upper mountain, where the gully funnels down to a huge chockstone. Climb past this and continue in the gulley (or ledges to its right) to the col just east of the summit. In dry conditions, the summit itself is just a walk from here, wandering up the top margin of the north face. If the north face is icy, these final steps can be sketchy.

Don’t do this route if you’re not comfortable on steep, sliding scree, because there is a lot of it. Most parties will avoid some, but not all, of the scree by means of bypasses on steeper rock. Helmets are advisable because of the risk of knocking rocks on each other.

East Ridge, class 4 or 5.0: This ridge is gained by going to Twins Pass and then following the crest. I did the route a long time ago in poor weather, and I recall one very exposed step that I assessed as easy fifth class, but it’s possible this can be avoided. At any rate, this ridge is harder than the south gully.

Other routes: The west ridge has been done and is reportedly fifth class with poor rock. Bold Peak and Bashful Peak from East Twin after and early August snowstorm. At 8005 feet, Bashful is the highest in Chugach State Park. Down the north face of the Twins to Butte and Palmer, 5800 feet below.

There is a parking fee of $5 per day at the trailhead, unless you have an annual parking pass. Bring exact change.

The mountain itself is managed as part of Chugach State Park under a management agreement, although it's not within the formal, statutory park boundary. Park regulations apply.

Camping is legal in this area and wouldn't be too hard to do in the tundra just beyond the end of the Twin Peaks Trail. Groups of more than a dozen will need a permit. Campfires are not allowed.

Weather in the area of the Twins can be dramatically different from Anchorage. Below is a weather forecast for Palmer, below the north face:

For weather at Thunderbird falls, below the outlet of the Eklutna Valley, click here. There is currently no weather data available online for the Eklutna Lake trailhead itself, 900 feet higher and farther into the mountains.

East Twin was called Lach Q'a by the Upper Cook Inlet Dena’ina. White settlers called it Goat Peak, and referred to the two neighbors (now West Twin and Goat Rock) as the Twins. A USGS mapping error many decades ago caused a name shift. The new "East Twin" moniker for the highest of the three peaks has stuck and is in universal use today.

Description of trails at Eklutna Lake