North and South Suicide Peaks are not only some of the most prominent Chugach peaks visible from Anchorage, they are also the two most uniform. These nearly identical twins rise just short of a mile into the sky from their base at sea level, with a height difference of only sixty feet.

South Suicide is the slightly lower and more graceful of the two summits. It is on the right in the photo above, which was taken by Clint Helander from neighboring Ptarmigan Peak. You can read about North Suicide on this companion page.

South Suicide is the highest of the peaks rising directly from the sides of Turnagain Arm fjord. Its summit gets several visits per week in summer, but most likely you will have the upper part of the mountain to yourself.

"Suicide Peaks" was a name bestowed by early railroad workers on a group of four peaks in this area, but over time only the twin peaks above Rabbit Lake have retained this name. 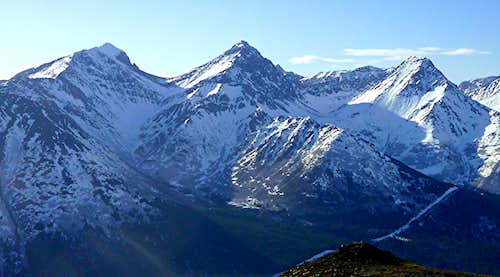 From left to right, South Suicide, North Suicide, and Homicide Peaks from the East, May
There are three main ways to approach the Suicide Peaks:

Rabbit Creek Approach: From the Seward Highway (Alaska Highway 1) in Anchorage, take the DeArmoun Road Exit and follow DeArmoun Road eastward into the mountains to the end of the pavement. Turn right onto Canyon Road and follow it to the permanently closed gate at the end.

About half a mile before this permanently closed gate there is a bar gate that has sometimes been locked from late evening until rather late in the morning--if there is a sign, read it carefully for latest opening and closing times and don't get locked in! You can park below this gate and walk half a mile to the end of the road if the lock-in is a concern.

Regardless of where you park, parking is very limited at this trailhead, so have someone drop you off if at all possible.

From the end of the road, hike up a gently rising track into the valley. The first couple of miles are brushy, but then the views open up and the Suicide Peaks will guide your progress. 4.3 miles from the trailhead you will encounter Rabbit Lake in the tundra. You will have climbed 1100 feet to the lake, and a 2000-foot climb awaits to the top of South Suicide.

South Suicide above Rabbit Lake, June
McHugh Creek Approach: Park in the paved, well-developed parking at McHugh Creek wayside, located on the Seward Highway three miles beyond Potter Marsh at the south end of Anchorage. Note that the upper parking lot is gated off at certain times; check the sign and park outside the gate if your itinerary so dictates. Follow the Turnagain Arm Trail back toward the city. After half a mile, turn right at a posted junction onto the McHugh Lake trail, which continues six miles to Rabbit Lake. The midsection of this hike is brushy and two people were killed by a grizzly here in the not too distant past; bring bear spray and make noise. Elevation gain is 3000 feet to Rabbit Lake and 5000 feet to the summit.

Falls Creek Approach: The small Falls Creek Trailhead is by milepost 106 of the Seward Highway. The Falls Creek Trail climbs from sea level to 3000 feet in three miles, following the creek to tiny Falls Lake, on the opposite side of the Suicides from Rabbit Lake. The summit is another 2000 feet above the lake. 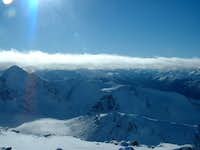 Northwest shoulder, winter
Most people climb these peaks in summer, and the route descriptions are below are geared to summer climbers.

Climbing in the winter gives the "big mountain" feel. For South Suicide, Hauser's Gully provides a reasonable snow climbing route, provided you have ascertained that the avalanche risk is low. 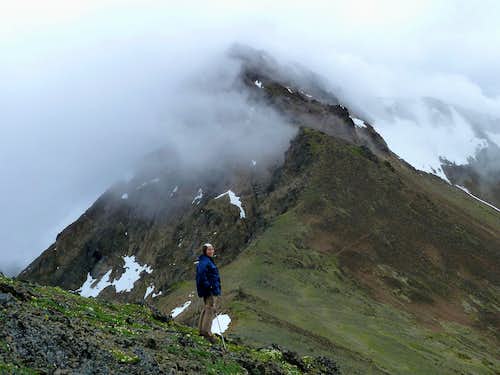 Along the recommended Northwest Shoulder route 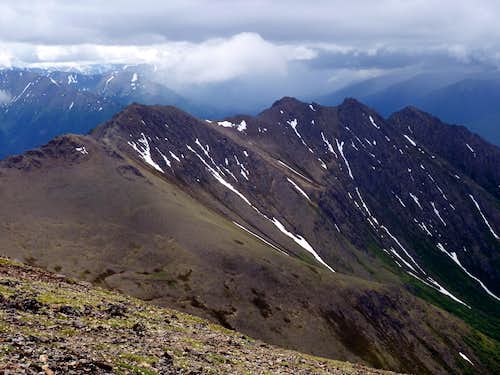 A view southward during the Northwest Shoulder climb 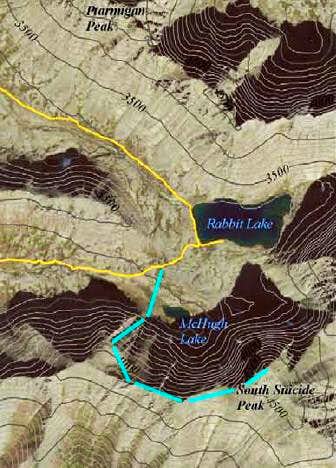 Map of Northwest shoulder route
The most pleasant way to climb South Suicide in summer is hike to Rabbit Lake and then to gain the mountain's northwest shoulder above McHugh Lake. McHugh Lake is located south of Rabbit Lake, about half a mile's easy stroll across the tundra. From the outlet of McHugh Lake, you can make the steep climb to the shoulder entirely on grass; try to hit the ridge a little southeast of Point 4235. From there it is a delightful scramble on grass and solid rock to the top. This route has none of the loose scree and rotten rock of the alternatives, and it is entirely class 2, spectacular but not exposed. The summit view is a knockout. Including the approach hike from Canyon Road, this route takes about four hours of travel time from your car.

Most people, unfortunately, choose to tackle South Suicide from Rabbit Lake by walking straight toward the saddle between the two Suicides (Windy Gap) and then bearing right up the very prominent class 3 gully that heads just left of the top of South Suicide. This is Hauser's Gully, a 30 degree snow couloir in May and early June, a miserably loose scree chute later in the season. I don't recommend it as a summer route.

If climbing via Falls Lake, bear left from the trail shortly before the lake is reached and gain the southwest fork of the south ridge of South Suicide. Follow this (class 2) to the top. A side trip to Peaks 4040 and 3960 can be added. Some guidebooks and websites steer you to the southeast fork of the south ridge, the one connecting to Peak 3920 and Indianhouse Mountain; this works too, but many people trying to follow this route get on the southeast fork too soon and have to sidehill around towers.

South Suicide can also be climbed via a long class 2 traverse from Rainbow Peak. 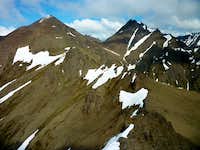 The two Suicides (South on the left) from Peak 3920, June
Rabbit Lake is one of the most beautiful places to camp in all of the Chugach. It is secluded, yet close to Anchorage. The pure lake shines a dark, sun-soaked blue, while the Suicide Peaks, Homicide Peak, Ptarmigan Peak, and the entire McHugh Valley fill the horizon. The tundra is very tent-friendly. Some people manage to pull rainbow trout from the lake (fishing license required).

On a few summer weekends, the number of tents scattered around Rabbit Lake climbs to a dozen or so. For pure solitude and an equally gorgeous setting, head on over to McHugh Lake before setting up your tent.

No permits are required, except for camping by large groups. Campfires are not allowed in this area. The McHugh Creek trailhead has a $5 parking fee. As of late 2019, a $5 fee is also being collected at the Canyon Road trailhead. If you have purchased an annual state parks sticker (550 W. 7th Avenue, 12th floor), you won't need to pay the parking fee.

Contrary to information that remains on some websites, none of the trails accessing this peak crosses private land without authorization. Access issues from the Rabbit Creek Trailhead were fully resolved in the summer of 2007.