Homicide Peak from the east, January A hiker on the approach to the South Gully route on Homicide Peak pauses to admire Turnagain Arm and Indianhouse Mountain
Tucked away so that it is practically invisible from Anchorage, and surrounded by higher, more famous neighbors, Homicide Peak gets only a few ascents a year. It should get more: it's a pretty, sharp summit with first class views, reached by a pleasant routes that won't have you thrashing through brush or trudging up scree. And it has a name that is to die for!

In the olden days, this peak was one of four known as the "Suicide Peaks." The Mountaineering Club of Alaska suggested the name "Homicide" in the early 1960s. Click to enlarge map
The most direct way to approach Homicide is to hike up from the Indian Valley trailhead. To reach this trailhead, turn north onto Boretide Street at mile 103.1 of the Seward Highway (Alaska Highway 1) and drive to the end of the road.

From this trailhead, elevation 400 feet, walk a couple of hundred yards up the Indian Valley Trail and turn left across a steel bridge onto the Powerline Pass Trail. After a brief mucky section, this trail provides fast walking at a moderate grade to brushline on the east ridge of Homicide Peak, the starting point for the routes below. The total approach distance is about 3.5 miles. The trail is heavily used by bears; make plenty of noise and bring your favorite deterrent.

The same point can be approached in 7.5 miles from the Glen Alps trailhead above Anchorage. This route follows the Powerline Road over Powerline Pass, several miles of which are fairly easy to mountain bike. Glen Alps is much higher than the Indian Valley trailhead, and so despite some extra climbing to traverse Powerline Pass, there is a little less overall elevation gain using the longer Glen Alps approach.

A third approach, via Rabbit Lake and the col north of North Suicide Peak, is much more difficult than either of the approaches described above.

East Ridge (class 2-3): About a mile southeast of Powerline Pass, at 3000 feet elevation, the Powerline Pass Trail crosses the well-defined east ridge of Homicide Peak. Walk up this grassy crest about 1000 vertical feet. When the ridge becomes steep and rocky enough that you're starting to wonder about a passable route, divert to climber's left (see illustration) and make an ascending traverse for a quarter mile or more across a series of ribs on the south face. Convenient notches, connected by a goat path, make this a pleasant and easy scramble. When you emerge from the ribs onto more open slopes, angle up to the summit, which may be farther west than you think.

A few hundred feet up the east ridge from the Powerline Pass Trail, there there is sometimes a prominent sheep trail sidehilling along the grassy southeast slopes (in lush years, such as 2019, this may be hard to find). Follow this until it peters out after a few hundred yards; then continue sidehilling below cliff bands until, due south of the summit, you encounter a broad grassy gully leading to the upper south face. Moderately steep grass and a little scree carry you to the summit ridge.

Other Routes: The Northwest Ridge (toward Powerline Pass) has been done by quite a few people, but not me. It appears to be fourth class.

The routes are illustrated in this photo.

Camping is not an attractive option on this mountain, except perhaps in the bowl southwest of the peak, which has a little tarn in it and pretty meadows frequented by dall sheep. This seldom-visited bowl would be accessed via the traversing path mentioned in the "South Gully" route description above, but would involve quite lot of steep sidehilling that would be unpleasant with a heavy pack. Campfires are prohibited, and very large groups require a permit.

There is car camping just a few miles east at Bird Creek. 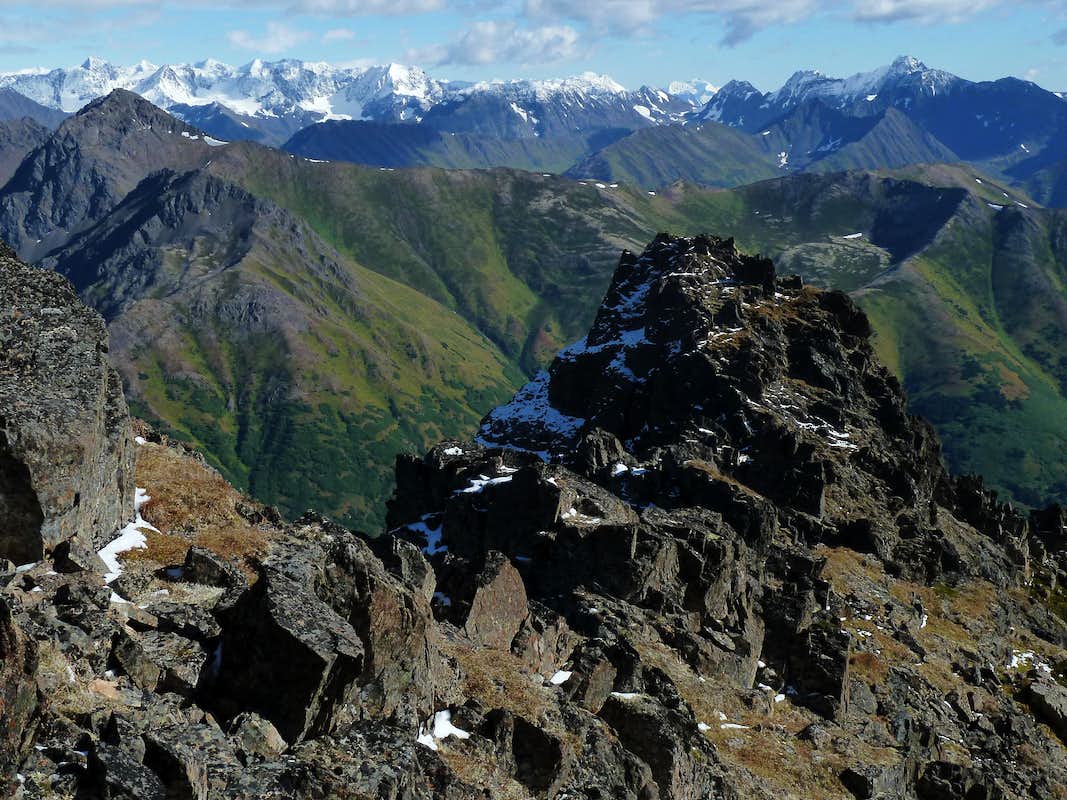 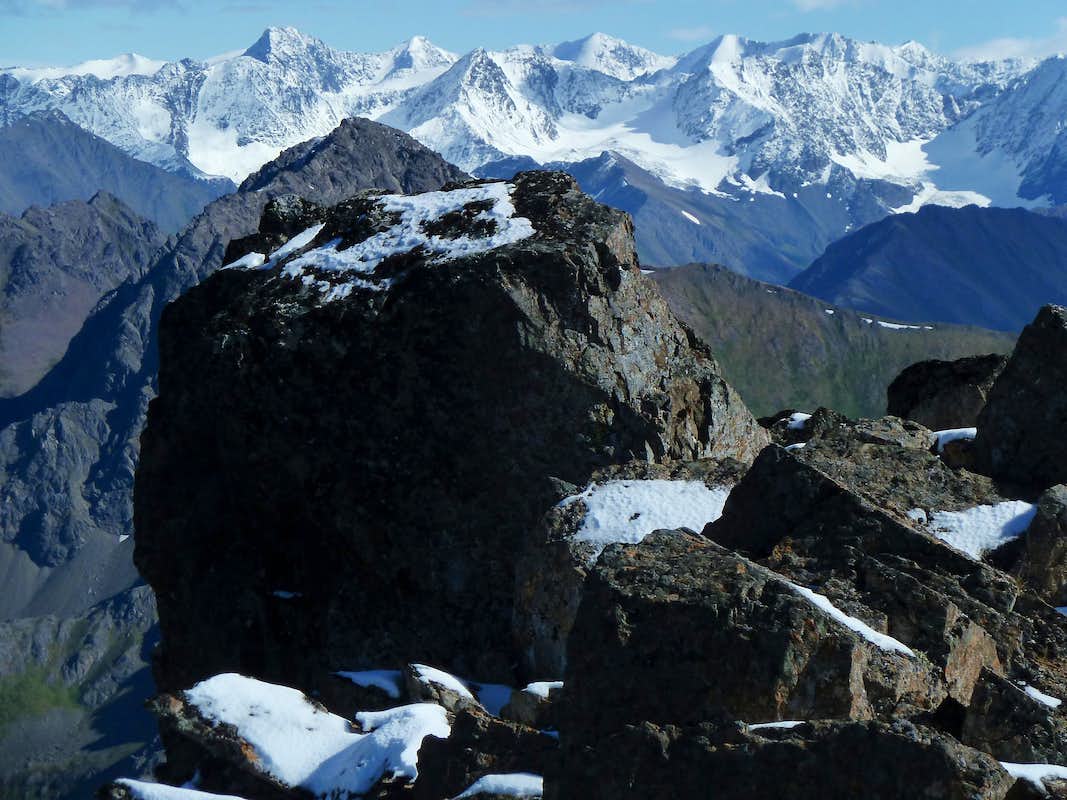 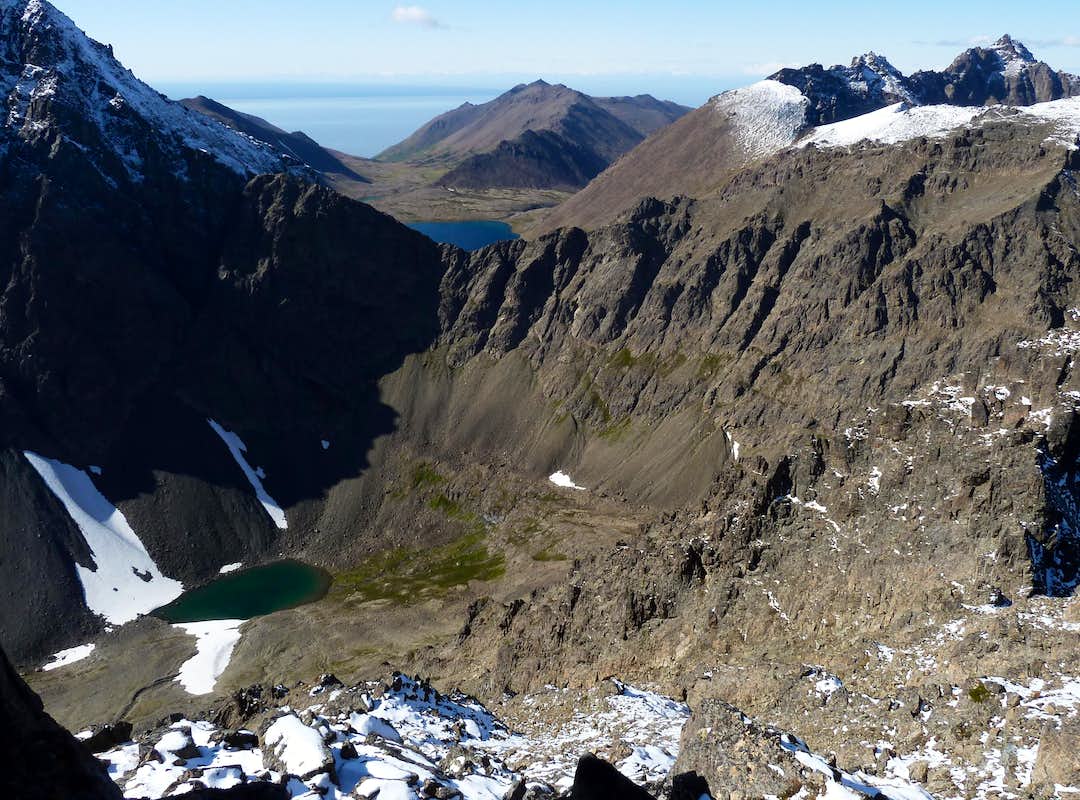 A good homicide works up a powerful appetite. Two minutes from the Indian Creek trailhead for Homicide Peak is the legendary Turnagain Arm Pit, where you can get the finest Texas-style barbeque in Alaska. The servings are huge, and “pit masters” Jack Goodsell and Todd Marcum are fun to talk to about their project to bring good barbeque to the far north. If you don’t take my word for it, check these reviews: