Views from the pretty approach hike. The mountain in the distance is Raggedtop.
Jewel Mountain is a middle-sized rock pyramid, imposing from most angles, that sits just east of the Iditarod National Historic Trail at Crow Pass. It makes a great half day destination on its own, or an excellent side trip of a few hours for those making the 24-mile Crow Pass crossing from Girdwood to Eagle River. Jewel isn't quite high enough to put you among the giants, but it provides a taste of the massive glaciers and rugged peaks that is missed by those who confine themselves to the trail.

There is quite a bit published about this peak, but much of it is wrong or misleading. This page is an attempt to improve the quality of information available to the large number of hikers who converge on Crow Pass. A goat on the S Ridge
The starting point for any ascent of Jewel Mountain is the Crow Pass Trailhead. From Anchorage, take the Seward Highway (Alaska Highway 1) southward about 30 miles to mile post 90. Make the well-marked turning left toward Girdwood. After two miles, turn left again on Crow Creek Road and follow it all the way to its end, about a 15-minute drive on well-graded dirt that is fine for all types of vehicles. The trailhead has ample free parking and an outhouse. The trailhead elevation is 1600 feet. The green line shows the off-trail portion of the NE Ridge route; the orange line shows the off-trail portion of the S Ridge route.
North Ridge (class 2): Hike up the excellent Crow Pass (Iditarod) Trail from the parking lot. The trail switchbacks through dense brush for about a mile before emerging into an open canyon below Barnes Mountain. You will see a prominent rock "peak" at the head of the valley. This point, 4400' at its summit but with BM 3883 is on its slopes, is a former nunatak from when Jewel Glacier was longer; it has variously been called "Crystal Point" and "Cabin Peak," although these names do not appear on most maps. Up to your right is another sharp peak--that's Jewel.

There are several variants of the Crow Pass Trail heading up the valley toward the nunatak. Regardless of which trail branch you are using, after about two miles of hiking from the trailhead (and 1400 feet of ascent) you'll pass the throat of a gorge in which Crow Creek goes over waterfalls. Just beyond the throat, leave the trail where the east branch of Crow Creek actually crosses your trail, the first and only significant stream crossing on way to Crow Pass. (The east branch splits in two above the lowest variant of the Crow Pass trail; for purposes of this description, ignore the smaller tributary and focus on the main east branch). Head east-northeast, using ledges or scree to pass the small cliff band over which E branch cascades, and enter the large scree/snow bowl between the nunatak and Jewel. Walk all the way back along the main stream until you reach the saddle behind the nunatak, and then turn to climber's right and make a short, easy scramble into the higher bowl containing south lobe of Jewel Glacier (almost a stagnant ice remnant now). Skirt this easily along its left margin, angling into the broad tundra pass between Jewel and the peak to its north. In early summer this is a traverse of snowfields on left of the "glacier," but no ice axe or glacier travel precautions will be called for. In late season you'll be mostly on moraine and scree.

At the pass, views open up over Milk Glacier and beyond. Ascend the last 400' on the class 2 northeast ridge to Jewel's summit. The four mile, 3250-foot climb from the Crow Pass Trailhead takes 2-4 hours. The route is mapped on a bird's eye photo here

In making this ascent, stay off the larger north lobe of Jewel Glacier (the part that's under Summit Mountain). You shouldn't be tempted to go over there, since it's seriously off-route, but I feel I have to warn you since that part of the glacier has significant hidden crevasses. The east branch
South Ridge (class 3): This seldom-climbed route to the top of Jewel Mountain offers a great alternative for those who don't mind some moderate scrambling and routefinding. Gain the col between Barnes Mountain and Jewel by climbing the scree gully from the Crow Pass Trail or--more pleasantly--by using steep tundra slopes to get on the south shoulder of Barnes, then walking over its pretty summit before dropping 100 feet into the col. From the col, scramble 1100 feet up the obvious ridge, weaving left and right of the crest as needed. This being the Chugach, the rock is pretty loose. About a hundred feet below the summit, a particularly exposed and unstable fourth-class step is bypassed in an orange gully to the right of the crest. With good route choice, this ridge is airy but the exposure is mild. Mountain goats seem to favor the south ridge as a route to higher grazing. 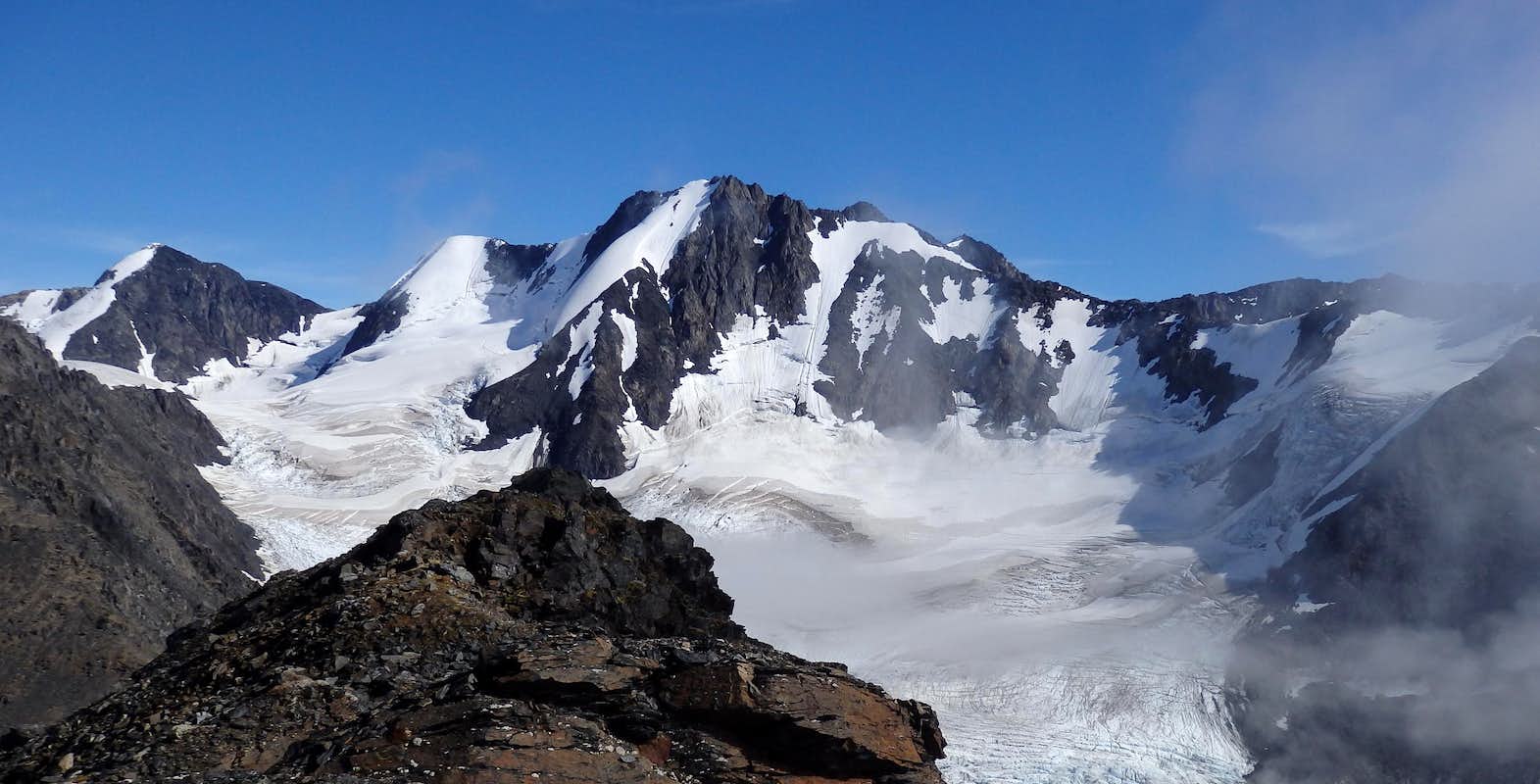 Jewel Mountain sits entirely in Chugach National Forest, not in Chugach State Park. There is no parking fee at the trailhead. There aren't any rules that will restrict reasonably responsible users. Don't mess with or deface the historic mining ruins.

Backcountry camping would be possible in the bowl between the nunatak and Jewel that northeast ridge hikers will pass through shortly after leaving the Crow Pass Trail. Although arduous to reach, there are also spectacular campsites in the Jewel-Summit Mountain pass, 400 feet below the top of Jewel.

The Crow Creek canyon, traversed by the Crow Pass Trail as it approaches Jewel, is prone to winter and early spring avalanches. This risk should recede by sometime in May. There are some bears (both grizzly and black) in the area, so that it is a good idea to make some noise and carry bear spray while hiking in the brush.

The Mines on Jewel Mountain Remains of the Monarch Mine. This item is probably a hydraulic ram pump.
Harry Ingle Staser, who came to Alaska via the Klondike gold fields as a teenager, operated two hard rock mines here in his later years: the Monarch Mine (sometimes misnamed the Agostino Mine), located under the west face of Jewel Mountain, and the Jewell or Jewel Mine, located on Barnes Mountain. The Monarch was the largest operation in the Girdwood Mining District, with 2000 feet of underground workings, while the Jewell had 1200 feet. Between them, the two mines produced about 5000 ounces of gold over their lifetimes. Staser was an industrious miner, and in 1937 he installed a 2500-foot single-span gravity tram to serve the Monarch operation, which was the longest tram span in Alaska at the time with no supporting tower. The remains of Staser's enterprise are all over the mountainside, including massive cables, splintered timbers, and even what appears to be a well-preserved hydraulic ram pump. Staser died here of a heart attack in the winter of 1940. Smaller gold operations around Jewel Mountain were run by two single prospecters: they were Henry Bromberger's Bahrenberg Mine, with remnants still visible near the toe of Jewel Glacier, and Clyde Brenner's Brenner Mine, which had 300 feet of workings down in the canyon. None are active now.

Barnes Mountain, a pleasant crest on Jewel's south ridge, is class 2 from almost any angle. It provides a nice consolation prize for anyone who finds the intimidating appearance of the upper south ridge a little too daunting.

Cabin Peak (also called Crystal Point) is a nice peaklet with about 200 feet of prominence near Crow Pass and BM 3883. Its 4400-foot summit is class 2 via its east ridge, and is just high enough to give some long views, north and south, though they don't quite match those on Jewel.

Summit Mountain is a 5300-foot summit to Jewel's north that looks like a hop and a skip, an easy second peak to bag on an ascent of Jewel from the north side. In fact, however, the most reasonable route over to Summit will funnel you onto the upper north lobe of Jewel Glacier, a portion of the glacier that--although it can look benign--actually does have a surprise crevasse or two. Don't go over to Summit unless you're equipped for this.