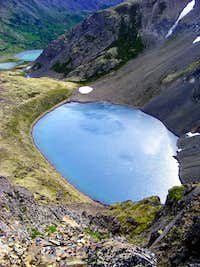 Black Lake from the NW Ridge
O’Malley Peak is the sharp mountain that dominates the south end of the Anchorage Bowl. Its dramatic profile has caused many a first-time visitor to draw breath as they emerge from the terminal and Anchorage International Airport.

With a summit elevation of 5184’, the peak is the highest of the front rank of peaks readily visible from South Anchorage. Despite its intimidating appearance from some angles, O’Malley has a number of easy and pleasant routes and can be climbed round-trip in half a day. At the top, the views are as fine as any in the Chugach front range, stretching north to Denali, west across Cook Inlet to the Aleutian Range volcanoes, and east—if the clouds allow—to the Chugach glaciers.

O'Malley has more than 100 meters of prominence and meets any definition of an independent peak suitable for mountains of this size. However, some people regard it as a sub-summit of The Ramp, a less dramatic point on the ridge a couple of miles farther east.

All the routes listed on this page are non-technical. The three ridge routes listed see almost no traffic, and even the better-known routes (1 and 5) might get only two or three parties on a gorgeous summer weekend.

There are three lakes nestled in the arms of O'Malley. Charming Black Lake is tucked in between the Northeast and Northwest Ridges, both of which have routes described below. A tiny pothole lake, Deep Lake, is sunk into the southeast corner of the feature called the Ballfield, described in Route 1. In a more severe setting is Hidden Lake, on the south side of the mountain and right under Hidden Peak.

The easiest starting point for all routes is the Glen Alps trailhead. From central Anchorage, take the Seward Highway south to O’Malley Road (or take the Minnesota Bypass, which turns east and becomes O’Malley Road). Drive about two miles past the Alaska Zoo and turn right onto Hillside Drive. After exactly one mile, take a left onto Upper Huffman Road. At the top of this, turn right onto Toilsome Hill Drive and continue to the large, paved, well-signed parking lot at the trailhead. The trailhead is at about 2200 feet, close to treeline.

All routes to O’Malley begin on the flat, gravel bike and foot path at the northeast corner of the parking lot, signposted "Campbell Creek Trails Access." 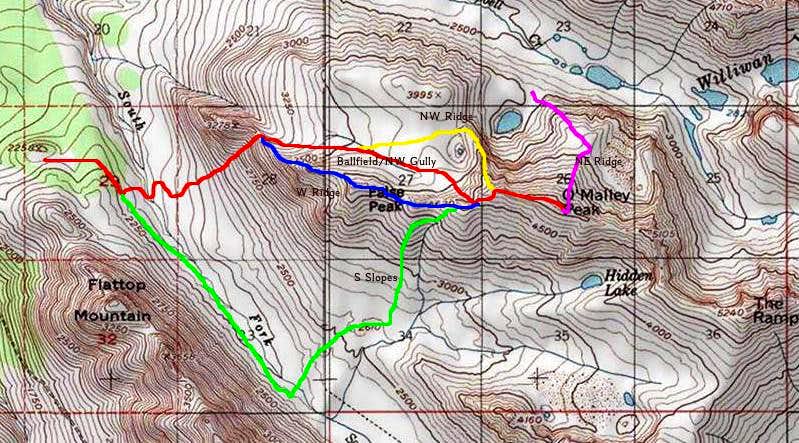 This is the traditional route up the mountain for Anchorage residents. From the Glen Alps parking lot, take the level gravel path at the northeast corner and walk half a mile to the Powerline Road (a dirt access road with no vehicular access for the public). Turn right (east) for about 200 yards, passing one big power pole, and then turn left down a major trail to a bridge over the south fork of Campbell Creek. From the bridge, your objective is the prominent gully dead ahead, which usually keeps some snow into August. Follow a boardwalk from the bridge to a T junction on the bench above the creek. Turn right and head for the gully. For the gully itself, you can choose either the snow or easy but steep grass along the sides.

The gully takes you onto a striking plateau that is variously called “the Ballfield,” “the Football Field,” or “the Baseball Field.” I’ll call it the Ballfield. It’s about one mile square, all above treeline and gently sloping. The wind can really howl on this plateau.


A trail leads east across the Ballfield to the base of the Northwest Gully of O’Malley, which is illustrated in one of the photos on the left. 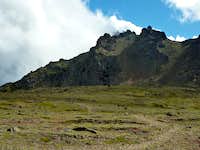 The Northwest Gully is the righthand gully of the two in this photo, taken from the Ballfield. Click to enlarge.

Climb this gully on irritatingly loose scree to the main east-west crest of the peak. Turn left (east) and continue to the top, following a boot path that hangs on the southern flank of the ridge.

At a brisk walk without breaks, it will take you about 45 minutes to reach the Ballfield, 30 more to traverse it, 40 to get up the Northeast Gully, and 30 to climb along the crest to the top.

After the bridge over the South Fork, there's no water on this route except in tiny Deep Lake at the base of the NW Gully ... and you'll have to scramble a couple of hundred feet down to get at that.

Follow Route 1 to the edge of the Ballfield. Turn east up the obvious main ridge of O’Malley. You will have to pass over the top of False Peak, which is a worthwhile peak in itself with impressive crags; 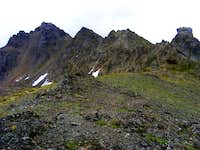 The ridge from False Peak to O'Malley
after that, there are three or four more false summits, most of which can be sidehilled, before you rejoin Route 1 at the top of the Northwest Gully. This is a pretty route but it takes about an hour longer than Routes 1, 3, and 5, and many find the succession of false summits to be discouraging.

Follow the Ballfield/Northwest Gully route (Route 1) onto the Ballfield. Once there, head for the base of the Northwest Ridge, skirting the left rim of Deep Lake. When Black Lake comes into view, turn sharply up the ridge. This spectacular ridge takes you all the way to the main crest. Where it becomes knife-edged and is blocked by a tower, an exposed step left into a short couloir leads to easy ground. When you reach the east-west summit ridge, the summit is to your left, about three hundred vertical feet above. It's best to drop down a little way onto the south slope, where you'll find a path that bypasses various false summits.

For those comfortable with some exposure, the northwest ridge is more pleasant in dry weather than Route 1's northwest gully.

This climb starts from Black Lake, which can be reached by traversing the Ballfield or by a circuitous hike around on the Middle Fork Loop and Williwaw Lakes Trails.

Climb steep grassy flanks to gain the flat Northeast Shoulder of O’Malley, which is like a miniature of the Ballfield and shares the Ballfield’s affinity for screaming winds. Continue on the crest of the Northeast Ridge. If you avoid the huge scree fields to climber’s right, you will find yourself on a delightful rib in fine situation, with decent footing most of the way and views eastward toward Hidden Peak and Mount Williwaw. Where the Northeast Ridge butts into the crest, you are about 200 yards and 100 vertical feet east of the summit. Turn right. 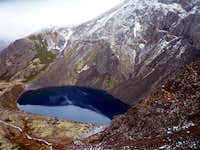 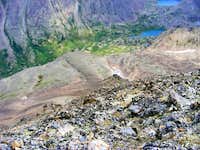 With good routefinding, this is the easiest and quickest way up the mountain. It’s by far the quickest if you use a mountain bike to cover the first three miles.

Start as in Route 1, but don’t go down to the first bridge over the South Fork. Instead continue another 2+ miles along the Powerline Road. Turn left when you see another bridge over the creek. Take this bridge, which starts you up the trail toward The Ramp and Ship Lake Pass.

The south slopes of O’Malley are straight ahead as you climb the bench above the bridge. People climb these slopes almost anywhere, but some routes are much better than others. You don’t want to veer too far left and climb False Peak, but on the other hand if you ascend too far toward Hidden Lake, you will be doomed to the scree climb from hell. Look for a nice tongue of grass that gets you to the summit ridge somewhere between these extremes, and follow the last bit of Route 1 to the top.

On foot, without rest, brisk hikers will make the summit in about 2 hours and a quarter from Glen Alps. Using a bike on the Powerline Road cuts about 30 minutes from that time.

At the Glen Alps parking lot there is a $5.00 fee, unless you have an annual sticker. It’s one of those envelope-in-the-box jobs, so bring exact change.

Parking capacity is very limited at Glen Alps, and if you can't find a place in the lot and you park out on the road, you are almost assured of a $200 ticket. This means that if you're doing O'Malley on a nice weekend day in summer, you'll need to start early--maybe even before 8 a.m.--to be sure of getting a place.

For groups of less than 12, backcountry camping is allowed without permits throughout the vicinity of O’Malley Peak. Campfires are not allowed (not that you're likely to be much tempted in this mostly treeless country). Good tenting sites can be found in the Hidden Lake valley and at Black Lake. Lack of shelter and difficult access to water make the Ballfield a less ideal place to camp. 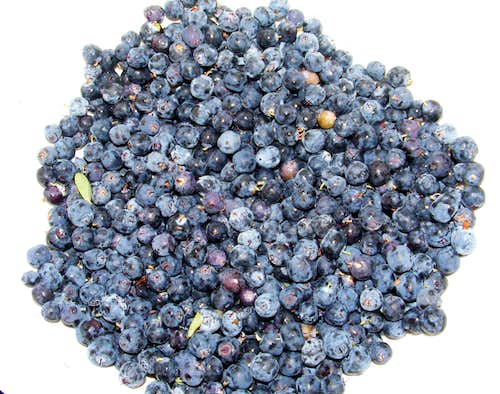 Route times do not include foraging stops

O’Malley Peak picked up its name from O’Malley Road, a long, straight road in south Anchorage that heads straight for the peak. O'Malley Road, in turn, is named for James “Doc” O’Malley, who owned property on the Anchorage Hillside in the early days.

Doc O’Malley was a beloved family doctor in Anchorage from the 40s to the 70s. He was fond of saying “Remember, the Irish are not white,” and is said to have been one of the founders of the Alaska NAACP. When he died, they say the wake went on for a week.

Debra McKinney, an Anchorage Daily News columnist, has written: “There's no shortage of Doc O'Malley lore floating about. He was a bit gruff, but he doctored a sizeable portion of this town. The rich, the poor, those in jail and those on the street -- drunks and prostitutes even -- when no one else would. If they didn't have money, berries or fish would do. And he had this way of diagnosing illness that was borderline eerie. ‘He was famous for doing this,’ [his son] said, impersonating his father. ‘He'd have the stethoscope around his neck and he'd hold it up to your chest and kind of go, “Um, OK,” ... and it wasn't even in his ears.’ They say Doc would just look at the sclera, the whites of the eyes. He'd press a fingernail to see how quickly it returned to pink. He'd take note of the gait. He'd sniff the breath. Old-timers around here say he could diagnose cancer with his nose. ‘He became a doctor before penicillin was discovered,’ [the son] explained. ‘Before gadgets. He practiced the art of medicine.’ He also worked every single day of the year. Even Christmas. ‘Illness doesn't take a holiday,’ he liked to say… [and] ‘never trust a doctor who plays golf.’”

The summit as seen from False Peak, February 2010. Photo by Natestation. 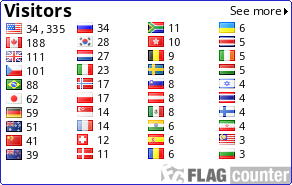